Elections and the Muslim vote

For the sake of the Muslims brutally attacked all over the world, let us make dua, be robust in our commitment to create change, and be hopeful in the vast amount of good around us.

For the sake of the Muslims brutally attacked all over the world, let us make dua, be robust in our commitment to create change, and be hopeful in the vast amount of good around us.

The early hours of the 13th December 2019 were solemn. In our hearts, we knew there was a strong chance of another Conservative government, but a chance only – the landslide victory of 364 to 203 was a shock to many.

Conservative not only secured seats, they knocked Labour out from their once comfortable seats in the North and Midlands. Sedgefield, Tony Blair’s old seat, epitomised the collapse of Labour in the 2019 elections. Workington saw a miserable decline in Labour votes and a surge of Conservative votes, switching for the first time since 1970. Labour, our reliance, our voice, our fall back as a Muslim community, was crushed on the 13th December 2019.

The profound sadness however, lies in the disheartening fact that the UK voted for an unapologetic racist. From comments such as “Islam is the problem” to “bank robbers” and “letterboxes” to full denial of Islamophobia in the Conservative Party, Boris Johnson is leading a divisive and discriminatory government. The Muslim voters, quite understandably, are anxious and worried.

After a huge campaign led by active organisations such as MEND, MCB and others, the Muslim community stepped up to politics. The general consensus delivered in masjids around the country was ‘to protect your families, your children’s future and vote, it is your right.’ The once shy masjids stood strong for the community as it recognised the need for a change in bigoted politics.

MEND sent policy pledges and manifestos to hundreds of MP candidates around the country, successfully impacting not only Party manifestos but also educating the Muslim community on which Party can potentially protect us.

Yet wretchedly, in the week’s lead up to the elections, we saw media release stories of Amaani Noor, an alleged British terrorist funder of £34, we saw the absolute denial of the genocide of Rohingya Muslims by Aung San Suu Kyi, we saw little resolutions being made by the West in defence of the torture and rape within China’s Uighurs Muslim concentration camps, and we saw the BJP in India put forward an outrageous Citizenship Bill that will exclude Muslims from humanitarian rights. Silence and the turning of a blind eye only legitimised the attack on minority Muslims around the world.

I cannot help but wonder if we have reached an era of ‘Don’t be racist, but you can hate Muslims’. Social media sees Muslims in the UK suffering from Islamophobic attacks not only by white people but by Blacks and British Indians too, as it emerged that the Hindu Council UK is now claiming solidarity with the Jewish community and accusing Corbyn of “anti-Hindu bias”. The basis of that claim was Corbyn chosing to condemn human rights abuses in the state of Kashmir, thereby criticising the Indian government.

It seems Muslims are at the forefront of hate, slander and defamation. Where does this leave the hopes of Muslims? Where and how do we, UK Muslims, fit into an increasingly far right agenda and Conservative government? Do we vote again? Do we continue to involve ourselves with politics?

A statement by Sufyan Ismail, founder of MEND:

Dear Muslims, tomorrow is for those who see it coming today. Regardless of today’s results, Muslims are now more politically active than ever. Win, lose or draw, Muslims have taken a mammoth leap forward…the British Muslim political revival has well and truly begun!”

Now, in the heart-breaking state we find our Muslim brothers and sisters in the UK and around the world, this remains the biggest reason ever to pull ourselves up. As Muslims we do not give up, being in a state of optimism is a sunnah, as the Messenger (peace and blessings of Allaah be upon him) said:

Let us be patient and strong-willed to continue the good this election brought for Muslims. Muslims are now on the map. We have Zarah Sultana, a Muslim female, elected in Coventry North. We have Apsana Begum from Polar and Limehouse, the first hijab wearing MP elected. We have Muslim candidates showing courage and bravery going up against the likes of Boris and Ian Duncan Smith. We are educating our children to hold firm upon Islam and be active members of society. We are encouraging our youth to take part in decisions that effect their livelihoods. This is the way forward, we are not defeatist.

Allah (subhaanahu wa tala) mentions that “they plan, but I am the Best of Planners” [Qur’an 8:30]. We must abide by this and call one another to patience for this is the decree set by Allah hundreds of thousands of years before our existence. Perhaps, the loss here is a gain for the future. As mention by Al-Hasan al-Basri (may Allaah have mercy on him):

I make no apologies in using such powerful quotes. With a rise in far right there will always be a rise in the opposite, ‘religious’ extremism. We cannot deny the nexus effect of hate on each side. As Muslims, if we allow ourselves to see this support of Boris as something greater than lack of education and brain-washing tactics by certain mainstream media upon the British public, then a minority will begin to get defensive and argumentative in a damaging way.

We must call to calmness and reflectiveness. To panic and become reactionary will be to cause harm not only to the self as it removes reward, but also creates rejoice among the shayateen. Our purpose ultimately is to please Allah (subhaanahu wa tala), to travel though this world gaining His pleasure in every action we take.

For the sake of our Muslim brothers and sisters suffering far worse than us, let us be grateful for our blessings today and never live in regret or ingratitude. For the sake of the Muslims brutally attacked all over the world, let us make dua, be robust in our commitment to create change, and be hopeful in the vast amount of good around us. Continue to step up and do so with the beautiful character of the Prophet Muhammad (peace and blessings be upon him), who always encouraged reconciliation and not violence:

“Let us go to resolve the situation and make peace between them” (Bukhari).

In the UK, we have countless blessings. I am certain every Muslim citizen has seen touching and encouraging moments, from Muslims and non-Muslim, of uniting against all forms of hate during the 2019 Elections. We have hardships but without the hardship how would we be appreciative of the ease? Without hardship where would our test and reward lie? Ultimately, we are here to be tested, and to Allah we belong and to Him is our return. 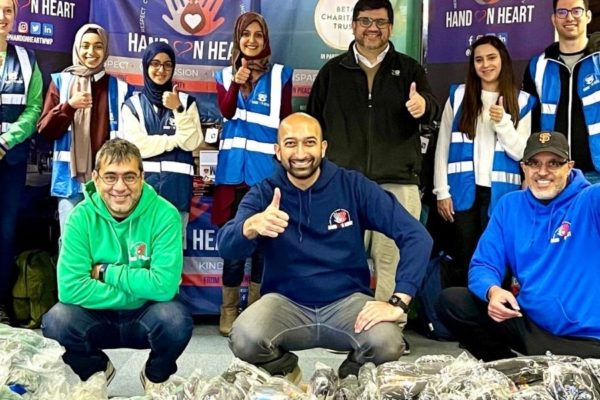