Cyclone Idai: The storm is over, but we’re still dreaming of a better future

When our local partner told us we had a route into Buzi to provide aid, none of us thought twice. We didn’t waste time worrying about the possibly dangers of getting on a boat and travelling for hours to a remote community which was mostly cut off from the rest of Mozambique, with no signal and no means to communicate with the outside world.

At the time, there had been almost no humanitarian aid in Buzi for 11 days after Cyclone Idai, the devastating natural disaster which tore through Southern Africa in March 2019, leaving more than 1,000 people dead and 1.8 million more affected.

I was part of Penny Appeal’s Cyclone Idai Emergency Response team in Mozambique, where we were providing vital food packs, hygiene & dignity kits, school supplies, and emergency shelters in the immediate aftermath of the disaster.

We had heard about Buzi in our daily briefings with the UN; due to the blockage of the main road into the area, no-one could get in – or out – leaving thousands of people cut off from aid and struggling to survive, including an entire orphanage.

After conversations with our local partner, LARA, Penny Appeal found a new route into Buzi… by boat. It was going to be a long, arduous and potentially dangerous journey to Buzi; our Emergency Response Manager asked us if we were comfortable with taking on the potential risks of the journey, and we were told, “If you don’t want to go, you don’t have to go.” But we knew that there was a whole community out there who needed help, and we had found a way to get to them with our local partners – so we were determined to go.

The Journey to Buzi

So the next day, we got up at 5am and loaded 5 tons of food, hygiene kits, and school kits onto a truck, walked out to sea with the aid on makeshift wheelbarrows, took a 2 hour boat ride, walked from the boat to the shore with the aid packed on the backs of cows and bulls, spent 3 hours unloading the aid onto a tractor, and took a tractor ride into the community. It became increasingly clear with every obstacle just why it had taken so long for aid to reach Buzi.

By the time we arrived at the orphanage and school, we had around 2 hours of daylight left in which to distribute the aid to the local community. We gave out 400 food and hygiene kits, as well as school kits for the children. We also left massive bags of beans and oil with community leaders, who know the community and understand their needs.

The people we met in Buzi were grateful for Penny Appeal’s help; honestly, it was humbling. Before we arrived, things had been getting desperate. With much of their food ruined by the cyclone, children had been eating corn with water splashed on it, just to try to keep going.

After we’d distributed all the aid and put our tents up in the dark, a lady came up to us, smiling, with a steaming pot of rice and beans – exactly the food we had been giving out. It was her way of saying thank you; a beautiful gesture of generosity from someone who didn’t necessarily know where her next meal was coming from.

For the rest of my time in Mozambique, our emergency response team was based in Beira. I’ve never seen destruction quite like what I witnessed there; 90% of the city was damaged in some way or another by the cyclone.

Massive trees, which had been growing for decades, had been torn out by their roots. Almost every building was damaged in some way, if not completely destroyed. From the pavements to the walls, the whole city was in ruins. 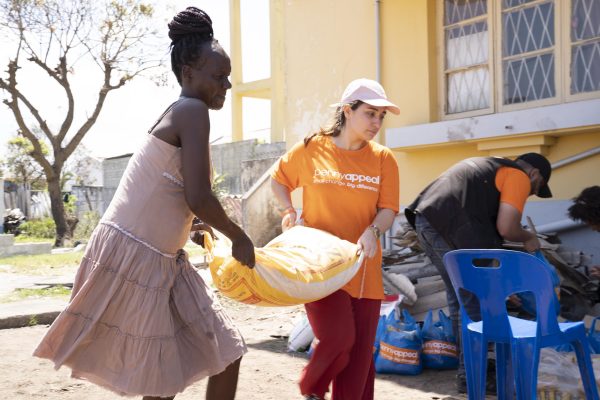 Working in Beira was overwhelming; everywhere you looked, there was destruction and chaos. Over half a million people live in the city of Beira, most of whom had been directly affected by Cyclone Idai. I distinctly remember travelling to one area where people were camping by the side of the roads; living under pieces of plastic because their homes had been obliterated.

Our response was targeted and efficient; we went to UN briefings each morning which gave us an overview of the ongoing humanitarian response, and allowed us to make continual needs assessments, so that we could make sure that we were reaching those most in need. We also worked on the ground with local partners, who knew the communities affected and understood their needs.

As Charlotte John, the Africa Desk Officer at Penny Appeal, puts it, “The success of any programme lies in your ability to work with local people. The success of our emergency response in Mozambique relied on the knowledge and expertise of local organisations.”

After speaking with our local partners, we realised that certain groups of the community in Beira weren’t getting the aid they needed, simply because they couldn’t come to the food distributions at the Community Centre. We did a targeted distribution for disabled people, going to meet them at a more convenient place with food packs and hygiene kits, with support from the local FAMOD organisation, making sure that this vulnerable group weren’t forgotten. Sadly, most of these people’s homes had been seriously damaged, and although we could help them meet their immediate needs for food and hygiene essentials, many of their houses were left in ruins.

What’s next for Mozambique?

It’s really hard to put my experience in Mozambique into words. We were all just so focused on making sure we helped as many people as we could. At the end of the day, we tried to make sure that we kept our emotions aside, no matter how hard it was to see all that destruction and suffering.

With only a small budget, we used our local knowledge to reach thousands, directly help those being forgotten like disabled people, and get to one of the hardest-to-reach areas in the whole of Mozambique with aid that may well have saved lives. Honestly, I couldn’t be prouder to be a part of Penny Appeal’s Cyclone Idai emergency response.

But the destruction which I witnessed will never leave me. The chaos wreaked by Cyclone Idai was impersonal in its nature, sweeping across homes and lives, but its effects were all too personal. 1.8 million people were affected by the cyclone – we helped thousands of people in its immediate aftermath, but what now?

It won’t be easy to re-build a country which saw much of their crops, homes, and infrastructure destroyed in one fell swoop. We are currently working on sustainable projects which we’d love to implement in Mozambique, which would help local people learn new skills and gain livelihoods. Training people in disaster response would also help people minimise the damage from natural disasters, which may well hit the country again in the future, since it’s particularly vulnerable to the effects of climate change.

Sadly, we can’t implement any of these sustainable projects to help Mozambique right now, because we just don’t have the funds. But I really hope that people’s attention is longer than the cycle of news, and that people continue to care for and donate to those affected by Cylone Idai. If you can, please give generously to Penny Appeal’s Cyclone Idai Emergency appeal – I’ve seen first-hand that even a small donation can make a world of difference.

Bruna Oliveira
Bruna recently began her career in the humanitarian sector, joining Penny Appeal at a Global Desk Officer at the beginning of 2019, and despite her short experience in the development sector, she already had the chance to put some of her academic knowledge into practice. She has a particular interest in working closely with communities and grassroots organisations. In future, she would like to contribute to Penny Appeal’s efforts to encourage the empowerment of women, to prevent them from being vulnerable to different forms of exploitation.