New Zealand Prime Minister Jacinda Ardern, referring to the attack, said: “It is clear that this can now only be described as a terrorist attack”. 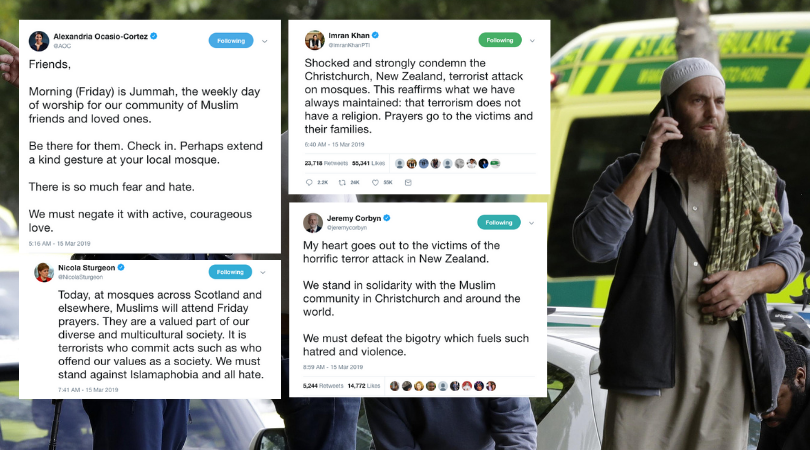 New Zealand Prime Minister Jacinda Ardern, referring to the attack, said: “It is clear that this can now only be described as a terrorist attack”.

The world awoke to shock and horror this morning after the horrendous mass shooting in New Zealand, where two mosques were attacked and worshippers were murdered indiscriminately, with one of the attacks being live-streamed to Facebook.

The shooter, an Australian citizen, was referred to by Australian Prime Minister Scott Morrison as an “extreme, right-wing” terrorist. It has since come to light that the shooter seemed to have published a manifesto detailed his adherence to far-right ideology and anti-immigrant sentiment.

TMV spoke to a Muslim from New Zealand about the attack below:

New Zealand Prime Minister Jacinda Ardern, referring to the attack, said: “It is clear that this can now only be described as a terrorist attack”. Referring to those in custody, she said, “these are people who I would describe as having extremist views that have absolutely no place in New Zealand, and in fact, have no place in the world.”

"We believe that 40 people have lost their lives in this act of extreme violence" – New Zealand's Prime Minister Jacinda Ardern describes the Christchurch mosque shootings as a "terrorist attack"https://t.co/gR0rfsjn5W pic.twitter.com/vTPYicjOj7

First Minister of Scotland Nicola Sturgeon promised to visit Glasgow Mosque later today, saying: “Today, at mosques across Scotland and elsewhere, Muslims will attend Friday prayers. They are a valued part of our diverse and multicultural society. It is terrorists who commit acts such as who offend our values as a society. We must stand against Islamaphobia and all hate.”

(Friday) is Jummah, the weekly day of worship for our community of Muslim friends and loved ones. Be there for them. Check in. Perhaps extend a kind gesture at your local mosque. There is so much fear and hate. We must negate it with active, courageous love.

Labour party leader Jeremy Corbyn called for a stand of solidarity with Muslim communities worldwide, adding that “we must defeat the bigotry which fuels such hatred and violence.” Prime Minister Theresa May offered her thoughts and condolences.

Shocked and strongly condemn the Christchurch, New Zealand, terrorist attack on mosques. This reaffirms what we have always maintained: that terrorism does not have a religion. Prayers go to the victims and their families.

London Mayor Sadiq Khan said that he was in constant contact with the London Metropolitan Police and that they were stepping up patrols around mosques. He also said that “London will always celebrate the diversity that some seek to destroy”.

The UK parliament paid tribute to the dead with a minute’s silence.

"This barbarity, this evil, this depravity will not prevail" – UK Parliament pays tribute to victims and survivors of mosque shootings in Christchurch, New Zealand with minute's silencehttps://t.co/cRfF77IMxx pic.twitter.com/8tjVP1RpL1

Sitting Australian senator Fraser Anning released a shockingly racist statement, saying that while he does not support violence, “what it highlights is the growing fear of our community… of the increasing Muslim presence”.

In a generic Tweet, Donald Trump offered his “warmest sympathy” and “best wishes” to the people of New Zealand. Less than 20 minutes later, he was Tweeting commentary on Fox and Friends.

Imam Suhaib Webb shared a prayer for the Ummah on social media, saying “it’s okay to feel scared; it’s okay to feel traumatized; and it’s okay to feel upset. Make sure we all show up to our spaces (on Friday), being strong and being present for those who are hurting. Hug, hold, cry and pray together”. He also advised mosques to take precautions against potential White supremacist terrorists.

Allah! Forgive the dead, secure their families, heal this fractured world and rest the souls terrified by this act of terror. Protect this Umma, ya Allah and make us strong!

Imam Omar Suleiman requested for the video of the attack to not be circulated, as “that’s what (the shooter) wanted”.

Meet the role models of ISIS, the true face of terror, the products of decades of demoniaization by right-wing Australian pundits and politicians.. Meet the murderers of 49 Muslim men and women worshippers. #NewZeland #ChristchurchShooting #whitesupremacy pic.twitter.com/NNaBBDd1g5

Sheikh Mohammed Al-Hilli said that New Zealand joins Iraq, Syria and Kuwait in having Friday prayers attacked, and that “terrorism is the enemy of all humanity”.

Mufti Ismail Menk said: “Such barbaric acts of terror are strongly condemned no matter who the victims or perpetrators are. We ALL need love, kindness & respect.”

Activist and co-founder of the North Star Shaun King pointed out that the shooter wrote in his manifesto that he admires Donald Trump because Trump is “a symbol of renewed white identity and common purpose.”

doesn't have the words. What do you even say? I was just in #NewZealand a few months ago and I was just at my local mosque a few days ago. Praying for those who were killed by a white supremacist while worshiping today and everyone they have left behind.

From a Christian fan in Christchurch: pic.twitter.com/ZFKXOZupaO

New Zealand Muslim rugby player Sonny Williams shared a heartfelt video, sending his duas to the families of the victims.

My heart is hurting about the news coming out of Christchurch. Sending love & prayers to the effected families❤️😢 pic.twitter.com/7PX9wc56b8

Their aim was to kill – but also frighten Muslims moving forward from worshipping. We WILL be in our mosques tomorrow. And moving forward.

The terrorist attack in New Zealand hits a nerve. The murderer carried out his crime against humanity in “Christchurch.” Jesus stood for brotherhood/peace/love. Christians worldwide are praying for the grieving Muslim families. We’ll defend your mosques forever. God help us all.

Miqdad Versi of the Muslim Council of Britain said that “attacks against mosques are not new and are regularly incited in the public domain.”

On Twitter, Jordanian student Yazan M. Qandel, referring to the live-streamed video said that the “saddest part” of the shooting was that when the shooter entered the mosque, a Muslim said “welcome brother”.