With the first episode airing in 1964, Jeopardy is one of America’s longest-running and best-loved TV game shows. For those who don’t know how Jeopardy works, the tied contestants are given the single clue, and the first contestant to buzz-in must give the correct question.

On Friday’s episode of Jeopardy, the contestants were posted this clue: “Built in the 300s A.S, the church of the nativity” to which a contestant correctly answered: “What is Palestine” but was told it was the incorrect answer. Another contestant buzzed in with “What is Israel” and was given the money. The look on Katie’s face says it all!

For those unaware, Bethlehem is known for being the birthplace of Prophet Isa (Jesus Christ) and is a Palestinian town in the West Bank. Here is the Wikipedia entry for Bethlehem: 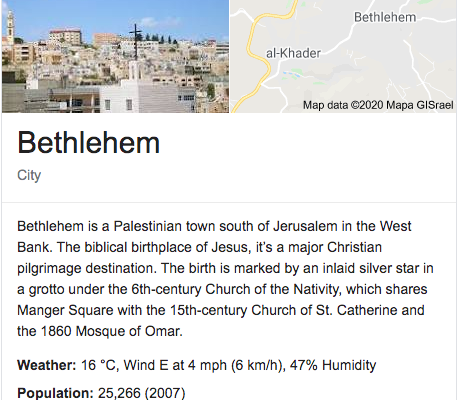 Many people on Twitter were quick to point out that the West Bank is, under international law, occupied by Israel. Omar Baddar, the deputy director of the Arab American Institute tweeted that “Jeopardy owes an apology for endorsing Israel’s universally-condemned illegal takeover of Palestinian lands.

Yesterday, Jeopardy published the following correction to their website:

“In the process of taping this clue, “BUILT IN THE 300s A.D., THE CHURCH OF THE NATIVITY” we became aware that the clue was flawed as written and that determining an acceptable response would be problematic. In accordance with our rules and in the interest of fairness, we voided the clue and threw it out. We restored Katie’s and Jack’s scores to what they were prior to the clue.  The outcome of the game was not affected. We then continued the game with this replacement clue.

Unfortunately, through human error in post-production, the uncorrected version of the game was broadcast. We regret the error and we will make every effort to ensure this never happens again.”