“Baba’s case is not special,” said Dr Sheik Showkat Hussain, a human rights law expert in Srinagar. “There are hundreds of Muslims in India who are implicated in fake cases and later on prosecution fails to prove their guilt but they are released after decades after spoiling their life.”

Some 13 years ago Bashir Ahmad Baba knew the inside out of computers and taught men and women how to operate a computer. It was a time when not many people in Kashmir were tech literate.

Today he does not know how to use a smartphone, not even how to answer a phone call. All because he was kept in an Indian jail for 11 long years for a crime he did not commit.

In late June this year, a court in the Indian state of Gujarat acquitted Baba of all charges in a 2010 case alleging that he was recruiting young men to send them to Pakistan for arms training.

The police had booked him invoking the stringent provisions of the controversial Unlawful Activities (Prevention) Act (UAPA), a law to deal with terrorism.

Baba, 44, a resident of Srinagar, the main city of Kashmir valley, was arrested on 27 February 2010 in a midnight raid on his hostel in Ahmedabad, Gujarat, by members of a special anti-terrorism force of the state police. He was visiting the city as assistant project manager of the crew of an NGO that helped in surgeries of differently abled people.

For more than two weeks he was interrogated and tortured, he said, by the police without being told about his charges. “I told them I was innocent and even they knew it,”  Baba said, speaking to The Muslim Vibe in an interview a day after he reached his home. “I did not know what an unlawful activity was.”

But on March 14 that year, he was presented before the media as a dreaded terrorist and termed “a big catch”. He was then sent to jail in Vadodara where he spent his next 11 years waging a long and tumultuous legal battle which he eventually won.

“The police, the intelligence, the lawyers, and even the judges knew all along that I was innocent and yet they kept me in jail,” laments Baba. “But I think this was written in my destiny.”

There have been countless cases of Kashmiri Muslims being kept in jails for years endlessly over terror or sometimes simply under preventive detention as they are “seen as a threat to peace” and later found innocent.

In July 2019, three men were released from jail after 23 years when the court eventually declared them innocent. They were imprisoned in a 1996 case of bomb blasts in the Indian capital New Delhi and Rajasthan state.

Weeks after their release, on the 5th of August 2019 when the Indian government removed Kashmir’s semi-autonomous and enforced a military siege, thousands of Kashmiris were detained in Indian jails for months without any trial. These included political leaders, business people, civil society activists, and even children.

“Baba’s case is not special,” said Dr Sheik Showkat Hussain, a human rights law expert in Srinagar. “There are hundreds of Muslims in India who are implicated in fake cases and later on prosecution fails to prove their guilt but they are released after decades after spoiling their life.”

The judicial and executive system in India is biased against minorities, he added. This is also evident from the fact that when police nabbed Baba from his hostel room, the police had also detained his colleague Dr Vijay Anand. He was let go after a brief interrogation, but Baba was not lucky.

During his time in jail, Baba had to ensure a lot – he lost his father to cancer in 2017, his aunt and uncle also passed away, and he was not allowed to attend their funerals despite pleas filed by his lawyer Javed Khan, who sadly passed away a month before his release. “Khan was a nice man, we can never forget his generosity. He did not charge us any fee,” Baba’s brother Nazir Ahmad recounts.

On the positive side, Baba used his time in jail productively. He studied and earned three master’s degrees in Political Science, Public Administration, and a diploma in Intellectual Property Act —  through distance learning.

“Books gave me company in a jail where I was the lone Kashmiri there,” he said, adding he was always hopeful of his release. He says he is thinking of looking for a job to teach what he learned in jail.

“After every Namaz (Salah) I would pray to Allah that may the doors of jail open for my son,” says Mokhta, his frail mother, who sat by his right side as the relatives and press reporters swarmed the room to meet the free Baba. “I met him in jail only once in 2014. It was a very painful time for me.” 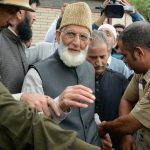