For a long time now, Islam gave dignity, liberty, and power to women. It gave responsibility and awareness of options. It gave identity to the woman and the ability to be a professional gave purpose other than what a woman’s body could offer. Yet as we grow as a society, more women are wanting sex to liberate themselves from this control, often perceived as a man’s world.

Disclaimer: I only speak for myself, not for anyone else. These are my own personal views.

I want to be an example for men and women, and I also have to present authentic femininity by eradicating the double standard, backstabbing, inconsistent versions that are so popular and well accepted.

We must dismantle this logic. Feminism says “no! ” to this logic but stops there – and this is why so many women are confused about how to value themselves.

Take advice from Islam, and don’t confuse culture for Islam. Real Islam values women and unlike modern-day American feminism, it outlines a plan. Islam has liberated me personally enough to say “I am not a slave to men. I am more than some baby maker, wife, et cetera. I am an individual like men are individuals. I have ideas and I need to be listened to. I am smart and need to be educated further. I have roles in family and society at large that are equally important as the man. I am a slave of Allah.”

I understand most readers will cringe as I am describing gender roles. But if the piece to a puzzle easily connects to the next, why force it to fit with another piece that is just not meant to fit with? To each their own. Gender roles exist and they aren’t necessarily a bad thing. I think they need to be clearer and improved upon. I also think freedom of choice should have a lot of leeways here, as I speak.

I observe that Western societies believe they have more freedom than many countries in the East because legally we are able to do fairly whatever you want and behave flirtatiously and cross physical boundaries without punishment. Okay, yes but what about the toxic masculinity that is systemic or in your very psyche?!

Women have fought for centuries demanding respect in politics, the workplace, society, and in the home. We have come a long way since medieval times and have a long way to achieve the equality and equity that we are asking for. I believe putting our sexuality at the forefront of our identity will make our progress plateau and eventually regress into female sex slavery.

For a long time now, Islam gave dignity, liberty, and power to women. It gave responsibility and awareness of options. It gave identity to the woman and the ability to be a professional gave purpose other than what a woman’s body could offer. Yet as we grow as a society, more women are wanting sex to liberate themselves from this control, often perceived as a man’s world.

In a toxic masculine world, it would look exactly like where we are headed. A land where women are giving men anything and everything they want and feel empowered by it. Even the pleasure the woman likes is power to the toxic man. Trust me, he feels responsible for the woman’s pleasure and is patting himself on the back for it.

I argue with our culture that revealing, open, casual sex encounters do not give you the individuality or power feminists are craving. I believe it discredits the woman’s image and other achievements because her body is more attractive than a hard-earned degree.

I believe when women are openly sexual, it is a sign we are brainwashed and manipulated by toxic masculinity thinking this is what we owe people, specifically men. Toxic men will not complain if you enjoy giving them sexual advances. Generally, men prefer you to feel free and empowered while doing it so that it is easier to steal the freedom and power in you. I believe that the more provocative you are, the easier “toxic masculinity” can mold you into its misogyny – like a toy. So don’t objectify yourself!

Sex workers have also been a hot topic for feminism lately. Sex work in society is real. Some enjoy participating in sex for money. Some people flaunt it and are proud of their business. The sex workers I know on a personal level are miserable for some reason whether it be her career choice or home life. It’s illegal in the United States to prostitute, but there are ways around it. I believe it is a sad transaction. I also believe it is a reality that needs to be dealt with carefully.

I speak for no one but myself, but I discourage sex work. I think it is desperate, and a last resort or low self-esteem and trauma bond-related for most people. It is bonded too closely with drugs, pedophilia, rape/violence, and death.

Sex workers do not deserve harm, they do not ask for harm. They ask for money, and access to healthcare amongst sex workers should not be shameful. We need the world to be educated on the pros and cons, the dangers and perks, giving more people a chance to understand fully to decide rather than feel forced into the unknown.

We need to implement non-judgemental, unconditional kindness no matter the background. This will motivate people to learn about all the injustices around the world from the legit Hell of the, for example, red-light district. We will understand how rape, drugs, disease, early death, violence, child prostitution, pornography, and sickness move people towards sex work.

If you don’t want abuse, violence, rape, pedophilia, drugs, or sexually transmitted diseases plaguing your feminism, think twice about encouraging your friend to do OnlyFans or any branch of sex work. Sex work is closely related and overlaps with these kinds of atrocities almost all the time. Just because it makes some women happy, doesn’t mean these are healthy women. That doesn’t mean the men are healthy. That doesn’t mean it’s good for humanity. I view sex workers as if they have an illness that needs to be rehabilitated rather than being evil or immoral.

Did you know: In pre and early Islamic history, in Arabia, slave women wore very little clothes? Free women covered themselves fully. That was how you presented yourself whether you were owned or not.

I believe modesty is one way to protest toxic masculinity. My hijab, for example, is a protest against toxic masculinity. However, it is not a protection from being sexualized because I have no control over who sexualizes me. Hijabi fetish, I’m sure, exists. But hijab does give me the power over what the person sexualizing me can physically visualize. What you choose to cover is what the pervert can’t see.

It is equally important to stress that the pervert, the molester, harasser, the rapist is responsible for their crime no matter what a woman wears or doesn’t wear. Whether you are bare naked in the street or wearing a burqa, just by being a woman, you have the chance of having these traumas, these horrific events inflicted upon you. That’s what we need to eradicate: the man who feels he is justified to hurt women.

Concealing yourself by having limited body language, and assertive communication and a modest dress code with general people is one small way to present yourself to the world that you are not an object to be used or obsessed over. Again what you cover, the pervert can’t see.

I want to be known for my creativity and wisdom and confidence. Not my body. I want my talents to shine bright, blinding that toxic masculinity.

Feminism, I wonder if it’s for a Muslim. Though Islam has feminist traits and ideas, it’s not necessarily a feminism movement. It’s an umma shift to become the people Allah wants us to be. The umma being all believers. We adjust ourselves for religion, we do not adjust our religion to what’s fitting for this ourselves.

We cannot succumb to the man. We cannot die out or become their slave. As far as I am concerned I have one Master and that is God. I try to align myself on the path He guides us toward.

Equal access to the best education. Fun fact: The wife of the Prophet Muhammad, peace be upon him, one of the “mothers of our religion”, invited women to be educated. She herself taught men and women the way of our religion. Fatima Al Fihri, a Muslim woman in the 800s A.D., built and founded the first university. And it is still a school today. In Islam, the religion, don’t be confused by culture, encourages education for all.

Equal opportunity is to be interested in expanding and perfecting individuality and talents. Pushing ourselves to be a diverse and well rounded as possible. If we want more roles and representation in society, we need to have the ability to do more.

We must fight to be validated and heard. We honor a woman’s touch valued and dire for this world. Men must accept how society needs women to be humanized and their choices valued, respected. In Islam, there are responsibilities for both men and women. To keep the peace.

In Islam, there is also no shame over a divorce. Ending an unhealthy relationship gives you more power than staying in it. Another fun fact. Women weren’t allowed to or ashamed to divorce in the pre-Islamic era (today’s Saudi Arabian region). Islam gave that right to women 1400 years ago.

We must condemn men being so weak that they are abusive physically, sexually, emotionally, or financially. Teach them how to treat other people. Since not all families will teach this in homes, teachers in traditional education have to offer a sex education that involves educating men specifically on how to eradicate toxic masculinity.

If we follow the examples in Islam, we would have rules yes, but if followed, not only do I believe it is the divine way, but this Islamic treatment of women could also protect us from toxic masculinity.

Men, admit what you’ve done to destruct the balance of how men and women and all can coexist respectfully. Clean your side of the street even if you weren’t the one who littered.

Women, be strong. Be fierce and bold. You have a role in this society. You are adequate enough for that role. Decide where you will place your responsibility.

We need equality but it starts with reshaping feminism. Eradicating toxic masculinity altogether. Teaching responsibility and parenting a culture to respect one another doesn’t come from women being a symbol of sex. That’s barbaric.

It takes us to come together as a community, and the activism of women independent from the toxic man’s vision. Us women must reorganize our values because what we do now, is not going to obtain what we want by itself. What we do now leaves us as victims. We want a victory. 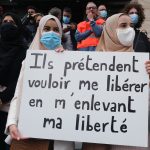 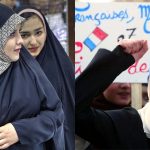