Islamoji: the Muslim emoji app that tackles lack of representation

“About a Year ago, I saw the popularity of celebrity emoji apps and immediately thought, I wonder if I could create something like that with Muslim emojis?”

“About a Year ago, I saw the popularity of celebrity emoji apps and immediately thought, I wonder if I could create something like that with Muslim emojis?”

What do Muslim Millennials do when they want to text about Muslim lifestyle specific topics, and there’s no emoji for it? They improvise. They use standard emojis and broken pieces of different dialects to get their point across, Arabic, English, Urdu-you name it.

One Muslim entrepreneur, however, has just changed all of that with the pre-order launch of her Islamoji app for the iPhone!

“About a Year ago, I saw the popularity of celebrity emoji apps and immediately thought, I wonder if I could create something like that with Muslim emojis? It’s been a long process, but I finally have a product that I’m proud of and that I think reflects Muslim lifestyle in a fun way,” says Sakeena Rashid, Islamoji creator.

Rashid is a native of Michigan, born into an African American Muslim family. She hopes her app will fill a void in Muslim pop-culture where there is a lack of products tailored to Western Muslims. We are just now seeing an emergence of Muslim figures in traditional media coming from established companies like H&M, Dolce and Gabbana and even Cover Girl. Rashid is hoping that representation will also start to come from more Muslim entrepreneurs within the community. 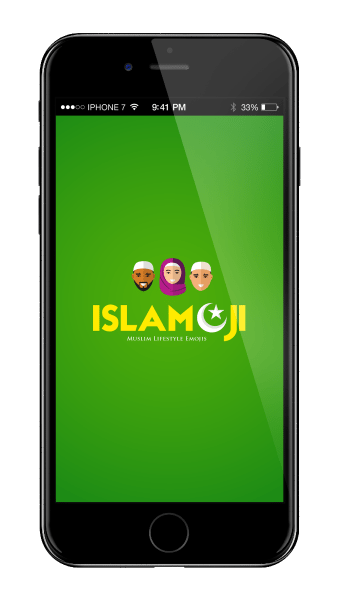 “This campaign has a heart. It’s about so much more than just an app. And if there’s one thing I want people to take away, it’s that as Muslims we can’t sit on the sidelines as stories are told about us. We have to create more platforms where we can reclaim our narrative, and begin to tell our own truths” Rashid says.

The platform she has created is a niche publishing company called Deeni Girl Media (DGM). She founded the company four years ago as a way to self-publish her first ebook, The Ultimate Guide to Hijab Style and Fashion. Fast-forward to today and DGM is now on its way to becoming an established publishing house for Muslim authors. That’s what Rashid is hoping for at least, and she has now teamed up with crowdfunding site LaunchGood to use her app as a way to raise funds to grow DGM. Disheartened with the constant negative portrayals of Muslims in media, Sakeena aims to amplify Muslim voices and share their stories to a global audience.

Works of fiction, memoirs, children’s books and a myriad of other genres will be focus areas for DGM. This gives more Muslim writers the opportunity to become authors and increase the availability of stories that young Muslims can see themselves in.

So now, when Muslim Millennials are texting, they can incorporate ethnic food emojis like baklava and biriyani, and mango lassis’ into their conversations. These are just a few of the 200+ emojis included in the app. There are nine categories including: people; fitness; buildings; gifs; and objects. Sakeena says some of the most popular emojis so far are the “Muslim dabbing emoji,” “Haram Police emoji,” and the “Bepsi” emoji. The app will also include special emojis for Ramadan and other Islamic occasions.