In October 1990, my parents arrived in the UK knowing only the words ‘Yes’ and ‘No.’ I was three years old and knew nothing of the suffering they had faced. The Iran/Iraq war had ended three years earlier and the first Gulf War would soon kick off. Like thousands of Iraqis in the early 90’s, my parents fled to escape persecution.

London became a hub for the growing Iraqi diaspora and so naturally a sense of belonging and familiarity was required in a society that was alien. This gave rise to a number of centres all seeking to provide a platform for this new community. From social to religious gatherings the community centres were a piece of home where Arabic was music to the ears, for a brief moment one felt in control. Not struggling to differentiate between ‘Kitchen’ and ‘Chicken’ or coherently express themselves in everyday life. 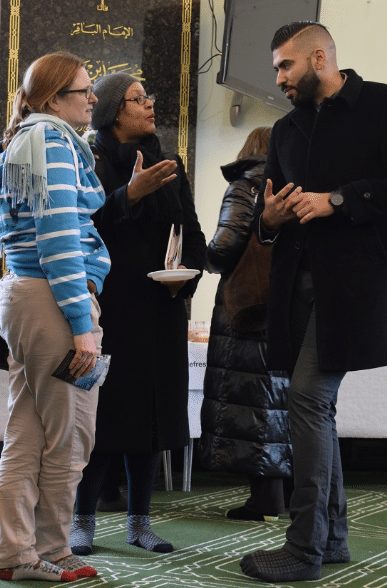 Now in 2017, many Iraqis are established individuals in their respective fields, English being their first language. Although Iraq is free from dictatorship for many it does not hold the promise of a return.

The community centres played a huge role in the 90’s and no doubt strengthened the identity of many. On the of 5th February 2017, one of the centres took part in the national Visit My Mosque day organised by the Muslim Council of Britain (MCB).

Dar Al Islam in Cricklewood, North London was established in 1993 and has been influential in the upbringing of many second generation Iraqis, providing a home for like-minded individuals. However, for 24 years, the centre has never opened its doors to the local community.

Visit My Mosque Day was a breath of fresh air in a climate where Muslims are the focus of the world. I found myself engaging in respective dialogue with members of the Jewish and Christian communities. Many intrigued by the interior design and some wanting to find out more about Islam. The day was captured by this lovely visitor:

Fantastic day at Dar Al Islam for #VisitMyMosque Day @MuslimCouncil a beautiful review by one of our guests! #mcb pic.twitter.com/if822cdUnj

The sight of visitor’s children running around together with children of the Mosque offers great hope for the future, one where the Mosque is open to all. 24 years ago its purpose was that of settlement, focusing on the needs of Iraqi Muslims. Today the community centre is a beacon of our identity where we must be proud to share with all. Visit My Mosque day offered a glimpse of that and allowed for people of various backgrounds to explore what has usually been hidden.

The day personified the words of the London Mayor and as our Mosque was open, so too was London.

The following is further feedback from visitors:

Enjoyed the warm welcome and nosey about today at #visitmymosque Thank you to the Dar Al Islam… https://t.co/90z78Zj4k6

Read more: A record number of Britons show solidarity with Muslims on largest ever #VisitMyMosque day.

Take Part In A Survey On How Muslims Experience Relationship Breakups