For my Muslim brothers and sisters: we need to move from focusing on ‘displaying Islam’ to ‘emitting and radiating Islam’ through its values. Consider if your ‘body is Islam’ or if you’re ‘embodying Islam.’

For my Muslim brothers and sisters: we need to move from focusing on ‘displaying Islam’ to ‘emitting and radiating Islam’ through its values. Consider if your ‘body is Islam’ or if you’re ‘embodying Islam.’

As a Pakistani American, I’ve grown up Muslim and consistently grappled with questions related to religion.

What does it mean to be a ‘good Muslim’? Why do some people consider ‘fundamentalists’ the most religious when they commit the worst atrocities? When am I ‘most Muslim,’ ‘least Muslim?’, and ‘how religious am I, really’?

During my childhood, “being Muslim” was associated with reading the Quran, reluctantly going to Sunday school, and occasionally fasting and praying. Post 9/11, my Muslim identity became both a badge and a wound, a stamp I would either hide in public settings or intentionally display in an apparent act of defiance (why can’t I say Allah Akbar in public??).

Attending a private Episcopalian boarding high school, by default I became the “spokesperson for Islam,” a role no one individual can or should take on. In college and beyond, I seemingly expanded or deflated the “Muslim in me” depending on my surroundings.

Now, as a working professional, I’m an experience strategist and design consultant, helping clients understand their users’ needs, often through interviews. There’s a major focus on questions and framing problems first. The wrong question will inevitably lead to the wrong results, and so before we do the “work right,” we have to do the “right work.” For this article, we then must take a step back to better understand what we’re asking when it comes to one’s relationship with Islam (or any religion). Let’s break it down into three categories:

As the article title implies, people typically ask some sort of variation of “How Muslim (or religious) are you?” today. However, they often aren’t asking about one’s relationship with Islam itself, but rather using religion as a proxy to reach a conclusion about something else. We can think about 4 major groups and the underlying questions actually asked:

The answers then match what’s being inferred. Responses include: 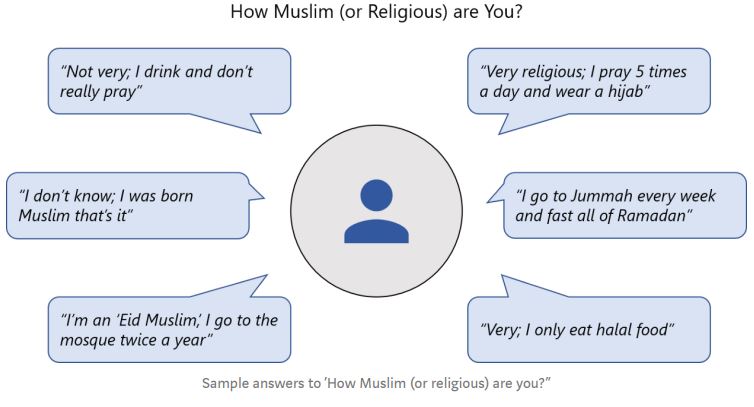 This information can be useful when appropriate (e.g. my future in-laws should know about how and where I practice Islam), but these types of conversations use religion as a measurement stick to assess someone on largely physical acts of Islam. The question ‘how religious are you?’ then becomes a mark on a linear spectrum, where ‘low’ and ‘high’ are relative to the asker’s interpretation of Islam. 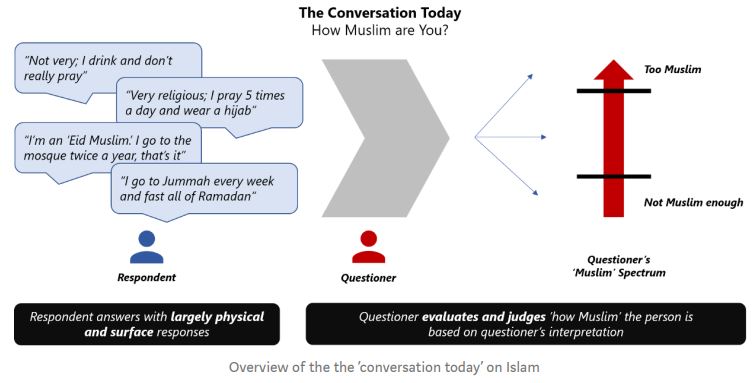 This linear spectrum doesn’t reach the root of religion’s influence on one’s being. And since the spectrum is subjective, the question doesn’t offer insight into how religious someone is, but just where she/he fits on our model. For example, someone who prays 5 times a day and only eats halal food may be ‘too Muslim’ for one person, but ‘not Muslim enough’ for another since she doesn’t wear a hijab.

Today we’re framing the conversation on the surface, on the physical manifestations (e.g. the frequency of prayers, what one wears or doesn’t wear). To really understand others’ — and our own — relationship with Islam (or any religion), we have to go deeper.

From Surface Evaluation to Holistic Understanding

With surface-level conversations, how can we understand the intricacies between what people do, believe, and feel? Does praying and wearing certain clothes driven by peers or cultural pressure rather than by faith somehow make someone more religious? Is the person who prays every day but is intolerant and abusive ‘more Muslim’ than the person who drinks and eats pork but dedicates his life to serving others in the name of Islam?

In discussing Islam — and religion as a whole — we must consider 3 fundamental principles:

We can’t simply assess one’s relationship linearly with all the nuances of Islam and all religions. So rather than evaluating the relationship, we must seek to understand the nature of that relationship, and that requires a more thoughtful question.

To understand one’s relationship with Islam, we should reframe our conversation to first ask:

How does Islam shape the person you are?

In posing such a question, we remove the barriers to understanding and reshift the focus on the person’s individual relationship, not on our own arbitrary scale. We move from evaluation and judgment to an open invitation to speak freely on the nature of one’s relationship with Islam.

Now answering this question naturally requires greater reflection and understanding of our own relationship. For each of us, the nature of the shape — across what we do, think, and feel — can be vastly different. It cannot be plotted on a spectrum. So how do we go about answering the question? Consider the following layers:

As we’ve seen, the “body” is where most of the conversations are spent today. This new approach may require greater reflection on our part, but provides greater depth. 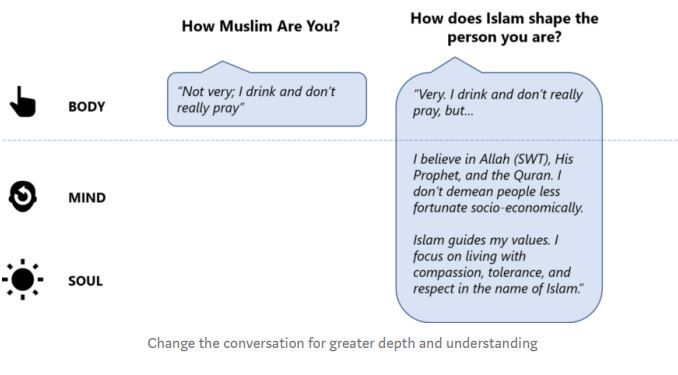 Bringing it all Together

“The wise man doesn’t give the right answers, he poses the right questions.” – Claude Levi-Strauss

In summary, we have 2 variations of framing conversations on Islam: 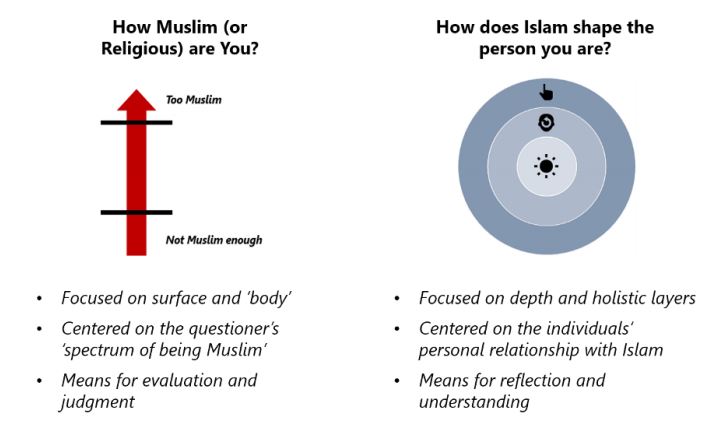 We as individuals are all dynamic works in progress and our relationship with religion is naturally as fluid as our own sense of self. Perhaps you want religion to play a greater role in your life, or perhaps you don’t. Maybe you are deeply driven by the spirituality and faith of Islam (or any other religion), but sometimes don’t act in a way that reinforces those principles. Or vice versa, you may check all the boxes of what you should be ‘doing,’ but the actions are driven by external forces rather than by underlying values.

Consider the questions you’re asking today — both to yourself and to others. Rather than focusing on meeting a subjective ‘scale of religion,’ reflect on where you are today, what state of being you aspire for, and what role you want Islam (or any religion) to play in that journey. Each institutional religion has the guidelines and spiritual call to action, but only you can guide it. Through the right questions, we can learn more about ourselves and others in this continuous journey of self-reflection and understanding.