The South African imam who fought against apartheid and racism

The South African imam who fought against apartheid and racism 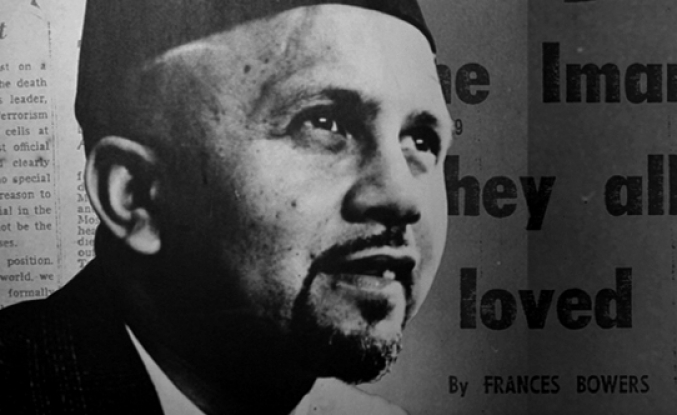 Imam Abdullah Haron, born in 1924 in Cape Town, South Africa, was a Muslim cleric who campaigned against apartheid and racism, eventually dying while imprisoned for his activities against the state. Imam Haron was the first religious cleric in the country to die in custody under the apartheid and white-supremacist government of South Africa.

The youngest of five children, Haron was raised by his aunt on his father’s side after his mother passed away while he was still a small child. After getting an Islamic education at a young age in Saudi Arabia, Haron returned to South Africa to continue the rest of his religious studies, also reportedly getting involved with organizations such as the Teachers’ League of South Africa and the Non-European Unity Movement.

Marrying Galiema Sadan in 1950, Haron was appointed as an imam in 1955 and at the young age of 32, was one of the youngest religious clerics in the country. He became the imam at the Stegmann Road Mosque in Cape Town, and quickly became a pioneer in community outreach and eventually anti-apartheid movements.

Imam Haron introduced classes for adults of the Muslim community, as well as discussion groups where topics could be chosen by the students to be discussed. He also heavily encouraged Muslim women to take part in these classes and discussion groups, as well as people from outside the Muslim community. These discussion groups and education classes were in large part one of the main lead-ups to his full involvement in the anti-apartheid movement. One of his lasting legacies as well was to have the children of the mosque sit at the front, rather than the back, while he lead prayers.

Speaking to the BBC, Aneex Salie, a former member of the ANC (African National Congress) that pioneered post-apartheid South Africa, said of the late Imam Haron:

He didn’t fit the pattern of the Muslim clergy which was quite ritualistic. He was very progressive, way ahead of his time.”

Speaking up against the white supremascist government at the time, Imam Haron regularily visited black communities living under apartheid in places such as Langa, Gugulethu, and Nyanga, where he was nicknamed “mfundisi”, which means priest.

While he kept much of his involvement in the anti-apartheid movement secret from his wife and children in order to protect them from authorities, Imam Haron developed close ties with both the ANC as well as the PAC (Pan Africanist Congress), both of which were waging an armed resistance against South Africa’s white supremacist government.

Speaking at a public meeting at Cape Town’s Drill Hall in 1961, the imam called the apartheid regime “inhumane, barbaric, and un-Islamic”. It was only four years later, when the apartheid government cracked down on anti-racist activists, that the imam and his family were forced out of their homes along with millions of other South Africans.

In 1969, Imam Haron was returning to South Africa after a secret meeting with Anglican priest Canon John Collins of St. Paul’s Cathedral in London, who agreed to smuggle money to the families of anti-apartheid activists in South Africa. The imam was picked up and detained by apartheid police, where he was allegedly tortured while in imprisonment. Only four months later, the imam was dead.

Although the security police at the time claimed the imam died after accidentally falling down a flight of stairs, Imam Haron’s autopsy showed two broken ribs and 27 bruises across his body – after he had been kept in solitary confinement with daily interrogations about his involvement in the anti-apartheid movement. The apartheid government was no stranger to the use of torture, and the imam’s family are currently demanding a new inquiry into the cause of death.

Imam Haron’s death was monumental in South Africa, with more than 40,000 people marching alongside his coffin for six miles until he was laid to rest in the Mowbray Muslim Cemetery. While his death sent shock-waves across the country, his legacy of solidarity, community outreach, and anti-racism activism remains an empowering inspiration for not only Muslims, but South Africans in general. Victor Wessels, a teacher at the funeral of the imam in 1969, famously stated:

He died not only for the Muslims. He died for his cause – the cause of the oppressed people.”

Apartheid only officially ended in 1994 in South Africa with the election of Nelson Mandela as the first Black president of the country, marking an end to an almost 50 year long rule of white supremacy in the country. As half a century passes since the death of Imam Haron, it becomes imperative on the part of Muslims today to remember the legacy of a man like this, who fought tirelessly and with his life for the equality of all peoples, regardless of faith or race.