When I introduced Imam Hussain to my school

After a year into my job as a secondary school teacher, and not revealing my identity as a Shia Muslim to my pupils, I decided to take the plunge and let it out. I had just experienced the most uplifting period of my life in the form of the Arbaeen Pilgrimage and wanted to do something that reflected the values of Imam Hussain that I just saw manifested in my pilgrimage. What could it be? I thought about it for many months; I witnessed millions of people doing things in the name of the human values Imam Hussain possessed at the pilgrimage and wanted to do my part, but it had to be something I was comfortable with doing.

September 2014 came, I entered my second year of teaching and had gained some kind of respect from the pupils of my school from the previous year and was much more confident. On my mind, however, I still hadn’t fulfilled my vow. It then clicked. As a part of the school routine, each year group (or grade) had to attend an assembly once a week that was led by a teacher on a certain topic they wanted the pupils to think about. For example, if there was a bullying problem in the school a teacher would do an assembly on bullying to the pupils. If we were entering the Christmas period, a teacher would do an assembly to all the pupils of the school on the importance of Christmas. Each week, a different themed assembly would be delivered to every single pupil of the school. So I decided, when Muharram arrives, I will deliver an assembly about Imam Hussain and his universal values.

We showed how he is commemorated by millions of people of all world views and we emphasised that his name should be as well known as Jesus Christ, Socrates, Martin Luther King and Ghandi.

However, I hesitated. This will 100% reveal that I am a Shia Muslim to all the pupils and I felt insecure. What if I don’t do justice to the legacy of Imam Hussain? What if people turn on me? All these whispers were running through my head for several days but then I thought what a hypocrite I am. I had just visited the man who gave his life and his family towards a bigger goal and I am worried about a few complaints. How can I be so unconfident at telling people about Imam Hussain when his stance should appeal to everyone regardless of religion, sect or culture? I proposed my idea to the teacher in charge of assemblies (who isn’t a fan of religion) and he was hesitant: “Mr Hussain, I will let you do it but it better not be one of those boring religious assemblies that are repeated every year. I want it to have a moral message and be something different.” I smiled and promised him something he’s never heard of before and something that definitely had a moral message. He looked sceptical but pencilled me into his diary.

I got my thinking cap on and came up with a presentation (with the valuable aid of a few pupils) to deliver to all 1500+ pupils at my school as well as staff members. I also wanted to make it topical and with the backdrop of the rise of violent extremism, I linked Imam Hussain’s story to how ISIS are the antithesis of morality, much like Yazid’s camp, and how Imam Hussain’s camp are what great humans should be like. We should therefore, also, say no to terrorism and extremism.

Staff members approached me telling me how shocked they were at why they had never heard of Imam Hussain before.

The week for my assembly arrived. I stood in the empty school hall and beamed my presentation onto the projector. With a knot in my stomach, I stood on the side watching the pupils arrive in the hall, very nervous. There was no backing out now. They arrived to the sound of Arabic eulogies about the tragedy of Karbala whilst a slideshow of images of Imam Hussain being commemorated by all faiths around the world in different countries played on the screen. The pupils seemed fascinated at the sheer amount of people being shown in images of the commemoration. They were confused and trying to work out who is this Hussain that is being commemorated. Is Mr Hussain doing an assembly about himself since that is also his name? Once they arrived, the stage was mine and me and my volunteer pupils spoke about Karbala for 10 minutes. We showed images, we showed the power of his influence, we showed what morals we can learn from him and we taught anti-terrorism using Imam Hussain. We showed how he is commemorated by millions of people of all world views and we emphasised that his name should be as well known as Jesus Christ, Socrates, Martin Luther King and Ghandi. The main moral to learn from our presentation was to make the right choice, regardless of any other factors because this is something the pupils could directly apply to their school life.

“Mr Hussain, why have we not heard of this before?”

We repeated this assembly 5 times (one per day to different age groups of pupils) that week. The knot in the stomach preceded each assembly but a huge round of applause followed each one. Each time assembly finished, I wanted to leave the hall before the pupils did so that nobody could give me dirty look or make an unsavoury comment, but I stayed (because Imam Hussain never ran away). It was a good thing I stayed.

“Sir, what an amazing assembly!”
“Sir, this Hussain guy…inspiring!”
“Mr Hussain, why have we not heard of this before?”
“This is the first time I actually learnt something in assembly!”
“I’m going to look into this Hussain man more.”
“Sir, can you do an assembly again next year on Hussain but let me help you do it next time?”

Pupils informed me how much they loved the message and story and I felt a relief. Imam Hussain’s universal message would never let me down, why did I have any doubts? During the following weeks, pupils would walk past me in the corridors and tell me how much they loved the story and learnt from it. Pupils would demand I teach more about him. Pupils saw my wristbands with Imam Hussain’s name on them and were now aware of why I wear them. They would stand with me during break-time and ask me more questions. My workplace has a mixture of pupils from several religions. It goes to show that Imam Hussain’s message transcends sects and appeals to those who love justice and human values. 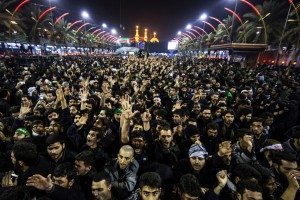 Staff members approached me telling me how shocked they were at why they had never heard of Imam Hussain before. 1500 pupils now knew I was a Shia Muslim and not once has it caused an issue to this day.

So why am I sharing this? Am I trying to show off to the readers at what a great job I have done?
Far from it. I can never repay Imam Hussain; I have done nothing.

Here is what I do want to say. I am a strong believer that you should tell people about Imam Hussain and uphold his values in whatever walk of life you are part of and in whatever capacity you are able to do so. Whether you are a Grand Ayatollah/Mufti, someone who sits on a pulpit, Priest, Rabbi, a taxi driver, a doctor, a lawyer, a sweeper; you should spread the values of Imam Hussain if you love them. Tell people about him through your actions at least, then through words. I choose to do it through the platform of education because I believe it will create a society of thinking individuals and that is what I believe the Imam would want.

In the 12th Imam’s (may God hasten his return) salutation to his grandfather Hussain, he laments the fact time and destiny did not allow him to help out in Karbala. The same applies to Muslims today – we were not there during Karbala and wish we could have done something to help. We can, however, do that today by ensuring the voice of Hussain is heard by everyone we come into contact with.