The Power Dynamics Around Hijab Bans

The power dynamics around hijab, niqab and burkini bans around the world play out against the fundamental questions of religious expression in the public square versus a government’s prerogative to police what women wear – whether that’s banning burkini or hijab or other forms of religious dress or insisting that women have to be fully covered.

The power dynamics around hijab, niqab and burkini bans around the world play out against the fundamental questions of religious expression in the public square versus a government’s prerogative to police what women wear – whether that’s banning burkini or hijab or other forms of religious dress or insisting that women have to be fully covered.

In the span of about a month, we were treated to two polar opposite viewpoints in regards to Muslim women’s right to wear hijab and full-coverage clothing in the public sphere. In Grenoble, France, Mayor Eric Piolle was met with heavy backlash for allowing women to wear the burkini in his town’s public schools, with French far-right leader Marine Le Pen calling the full-coverage swimsuit a threat to French secularism.

In the state of Maryland in the United States, hijabi student-athletes were granted the legal right to wear hijab in sports through a state bill called the Inclusive Attire Act, which allows student-athletes to wear head coverings and other religious clothing without needing any waivers to play sports, the latest in a wave of similar state-sponsored legislation (like in Ohio) as well as changes to various rulebooks as governed by various high school sports associations and governing bodies.

The power dynamics around hijab, niqab and burkini bans around the world play out against the fundamental questions of religious expression in the public square versus a government’s prerogative to police what women wear – whether that’s banning burkini or hijab or other forms of religious dress (in France, various parts of Europe and India and in Quebec, Canada) or insisting that women have to be fully covered (in Afghanistan or Iran during certain time periods).

Which begs the question – what is up with the power dynamics around what women choose to wear and whether or not they wear it for the sake of religion?

In the past few years alone, hijab ban laws and cases have become flash points across many countries, with many of these bans being justified under the banner of secularism or “positive secularism.”

In early 2022 a high court upheld a state government order in Karnataka, India, that banned hijabs in the classroom, stating that the hijab is not “essential” to Islam, setting a dangerous precedent across India. This verdict came against the backdrop of targeted violence against Muslims and continuous conflict in India, in which a situation arose in the latter half of 2021 at an Indian college preparatory school in Udipi, Karnataka, where several Muslim students weren’t allowed to attend classes and were marked absent due to their wearing of the hijab.

In our coverage of this ban, we wrote how the students continued to wear hijab (which they and many female Muslim students before them had done so without any issue), moving the school to ban it, saying that it violated their dress code. Parents of the students filed a petition against the ban, and a local court temporarily upheld the ban. The story garnered national attention when a video of student Muskan Khan went viral, as she defiantly walked away, shouting “Allahu Akbar,” from a group of Hindu men who were flanking her and harassing her on the grounds of her college.

Several months later, a three-judge bench in India upheld the ban, saying it would “hinder their emancipation and go against the constitutional spirit of ‘positive secularism.’” The 129-page ruling, as reported by the BBC, quoted passages from the Quran and books on Islam to argue that the hijab is not an obligatory religious practice:

“‘There is sufficient intrinsic material within the scripture itself to support the view that wearing hijab has been only recommendatory if at all it is. What is not religiously made obligatory therefore cannot be made a quintessential aspect of the religion through public agitations or by the passionate arguments in court,’ the order says.”

So the basis upon which the high court upheld the hijab ban is that hijab is not an essential part of Islam, it isn’t “required,” and it goes against “positive secularism,” a major power play against the freedom of religious expression in a democratic country. We can talk about if the hijab is fard (obligatory) or not, but in a democratic country like India, where the liberty of thought, expression, belief, faith and worship is safeguarded in the preamble to its constitution, that doesn’t even matter.

Similarly, in France (and other European countries), a crackdown on the hijab in the public sector (the burkini and the niqab) has been ongoing for years. In April of 2021, an amendment to a proposed law that would reinforce “the respect of the [French] Republic’s principles” was passed by the French senate. This amendment bans the hijab for minors under the age of 18. Also banned are Muslim hijab-wearing mothers from accompanying their children on public school field trips. 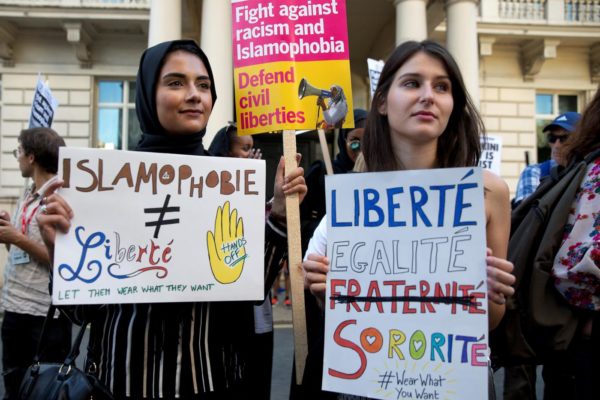 Then in early 2022, A group of 300 French politicians made it their business to decide the fate of a Muslim woman wearing a hijab while engaging in sportsmanship. And in a legislative victory, voting 160 to 143, they passed an amendment proposed by a right-wing group to ban the hijab in sports competitions. Why? Because the French Senate argued that “neutrality is a requirement on the field of play.”

In a motion masked as progressiveness and “forward thinking”, the French Senate pronounced that what was once the key footing for a secular society – to practice one’s faith without judgment – is an obstruction of justice. The language of the amendment says that the wearing of “conspicuous religious symbols is prohibited” to compete in official competitions and events organized by sports federations. But, as Al Jazeera reported, in their written support of the amendment, French senators specifically stated that the amendment bans “the wearing of the veil in sports competitions,” saying that hijabs are a safety risk for athletes when they practice or compete.

Bear in mind that France is set to host the Summer Olympics in 2024, and there are many Muslim women from various countries who compete in full-coverage uniforms and/or hijab.

Juxtapose that against a recent push in the United States to remove rules instituted by various high school sports governing bodies to remove religious headwear waivers from the rule books. In the past two years alone, here at Haute Hijab, we’ve covered at least four such stories (such as this one about high school volleyball player Najah Aqeel)  as well as reporting on other student-athletes who have successfully fought to pass state legislation calling for more inclusivity when it comes to religious attire as part of sports uniforms.

We even put together and presented a resource on hijab and hijab in sports to the National Federation of High School athletics organization (in the U.S.)  ahead of their annual rules committee meetings in 2021. The NFHS is one of a few organizations that write the rules for high school sports across the United States. Our presentation, which supported the work of athletes like Najah and explained the mechanics of sports hijabs and why it is not a safety risk, helped inspire rule changes for high school volleyball, soccer and field hockey and more.

The decision to wear a hijab is intensely personal and should be protected as a fundamental human right of choice – without bans against it or forced wearing of it. The continued focus on banning the hijab and other forms of religious expression and headwear in the public square is part and parcel of a larger thrust of government and political entities to keep power in their hands. And if broader society does not feel for women who have been wrongly oppressed by this decision, then we need to take a hard look at ourselves.

Because this is not just oppression of Muslim women, it is the canary in the coal mine that human rights are at risk.

Haute Hijab
Haute Hijab is the premier hijab and lifestyle brand for Muslim women, with a mission to create a world where every woman feels comfortable and confident. Haute Hijab elevates the experience of hijab while building a robust community of powerful women. Founded in 2010 by CEO Melanie Elturk and Ahmed Zedan, Haute Hijab is inspired by the Islamic value of ihsaan, striving for beauty and excellence in all things by creating products you always wished you had, or didn't know were possible. From performance hijabs and groundbreaking designs to sustainable innovations, we’re obsessed with fusing design, style and technology into hijabs and accessories that are made to the highest standards and place a premium on sustainability and ethical practices.