Our First Qurbani Experience Was Divine

This was our first in-person Qurbani, but won’t be our last

This was our first in-person Qurbani, but won’t be our last 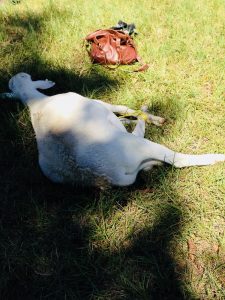 Doing the things that Allah has commanded you to do sometimes can prove challenging. Quite challenging. Slaughtering animals does not sound appealing in a general sense, but once you put it in a religious context, it’s a beautiful thing. This is the mindset and approach we took four years ago when we set out to participate in the animal sacrifice ritual Duhl-Hijjah.

After much discussion and research, we were ready to face our fears and slaughter our own animal. It was scheduled to go down right after Eid prayer. We traveled about an hour and a 1/2 to a small family-owned farm in Shorter, Alabama, that was set up to handle all steps in the process. We were already an adventurous couple so this was another adventure that we would be able to do together, but much more rewarding.

Upon arrival at the farm, we realized that we were amongst many Muslims, of all ethnicities, doing what Allah commanded them to do.

And the camels and cattle We have appointed for you as among the symbols of Allah ; for you therein is good. So mention the name of Allah upon them when lined up [for sacrifice]; and when they are [lifeless] on their sides, then eat from them and feed the needy and the beggar. Thus have We subjected them to you that you may be grateful.

There weren’t any camels in Alabama, but there were goats and lamb. We liked both, but lamb would be the preference.

Helping little Muslim handlers, ranging in age from 10 plus, helped us catch our particularly selected animal and move him to a quiet slaughtering area. As we looked around and saw so many other animals fighting to get away from their handlers or struggling to remain still in anticipation of their circumstance, our little lamb was still. Calm. It was like it had made peace with its destiny. We were asking each other if this was weird or if we had chosen a divine animal from Allah. Animals worship the Lord of the Worlds as well. Did this animal understand the same as Ibrahim’s son that our command was to sacrifice? How could it?

When it was our turn to do the slaughter, because we heard so many other animals crying out, we let the more experienced slaughterer do it. The cut has to be quick and precise so that the animal does not suffer. Our slaughterer realized our knife was not sharp enough and sought out another one. He positioned the lamb just right, facing Qibla and with the neck vein gouging. Nothing is perfect but Allah and Islam, but this was as close to perfect as it could get. We kept reciting Dhikr over the animal until it completely transitioned. Our slaughterer then took the animal for skinning and meat processing.

Although there were many doing this, it would be a complete untruth if we didn’t say we were uneasy by it all. Over 20 years of practicing Islam, and years of intentions to do this hands-on after paying for someone else to do it, took a few conversations. Experiencing something for the first time does not mean that you will be comfortable with it.

Qurbani is a Dhul-Hijjah ritual that happens every year and the rewards of it are of great magnitude. A hadith mentions,

The Companions asked the Prophet, “O Messenger of Allah, what is Qurbani?” The Prophet said:

“This is the Sunnah (Custom) of your father (Prophet) Ibrahim (Peace and Blessings be upon Him).”

The Companions then asked, “O Messenger of Allah, what reward will we get in this?” The Prophet (Peace and Blessings be Upon Him) replied,

“A virtue for every hair (on the animal)” 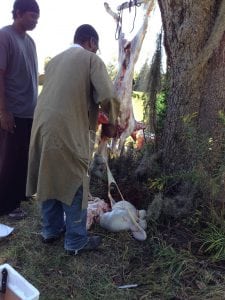 Once you purchase the animal, you’re offered every portion of it, from the skin to the head. We declined the skin and the head and some other not so popular parts. Those were donated. After our meat was prepared and packaged, we wanted to take this time to immediately deliver it to friends and family. We shared 2/3 of our meat: 1/3 went to family, 1/3 went to the needy and neighbors, and the lamb ribs and shanks they went to us. Barbecued and smoked was how we enjoyed them. The fresh meat, really fresh meat, has to be cooked a little longer. We have been so conditioned to receive our meat a certain way that straight from the animal can mess with fragile stomachs.

This was our first in-person Qurbani, but won’t be our last. With technology and organizations such as ICNA Relief and Helping Hands, it’s easy to donate domestically and internationally. The hands-on approach is not for the timid. If you don’t like the sight of blood, because there is a lot of it, you either man or woman up or sit this one out. It’s Quran and Sunnah and the way of the Prophet. We hear and we obey. Now pass the barbecue sauce! 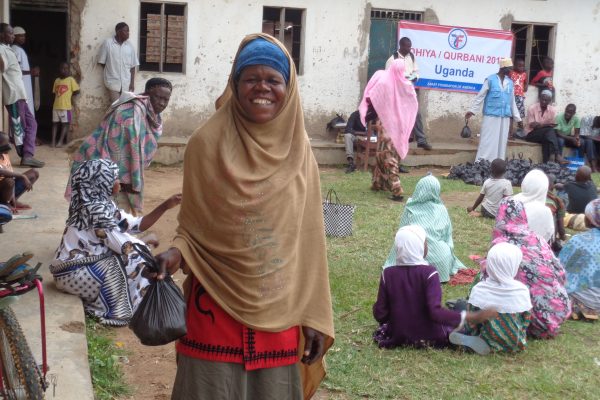