[Photo Essay] “Like a thief in the night.. the truth must come.”

A photo journal of Shia mourning rituals in the city of Manama, Bahrain.

A photo journal of Shia mourning rituals in the city of Manama, Bahrain.

The Islamic lunar calendar begins with a sacred month of mourning — Muharram. This year, 1438 AH, I sat out to observe Muharram’s yearly processions through my rookie attempts at street photography. I would typically whine and moan about the negative practices surrounding the processions — from the excess of food to the general cleanliness of the streets. These angles are ought to be the basic courteous measures one can be mindful of in what is supposed to be a mournful setting. While these practices certainly cannot be ignored, I preferred to focus on a deeper mindset this year: what does it mean to mourn? It is after all the core of the Hussaini commemorations.

In the same light, I cannot help but to first criticise what is now a normal scene in local funerals. A couple of weeks ago, I went to pay my condolences to a friend whose mother passed away. The atmosphere was very close to that of a noisy classroom. Most of the attendees were socialising; blatantly chattering and cracking jokes with one another. Honestly, it wouldn’t be much of a shock to spot some closing business deals. It’s a real shame to not sense a communal sympathy for the family of the deceased. If sympathy is such a hard thing to muster, then the eerie air of death should be enough of a reminder to humble one down a little. To behave well. Keep the eyes down.

With that out of my system, on with the photo series. The shots are sequenced in a way that allows me to express my personal exposure to Muharram rituals every year and relate it to the main question. 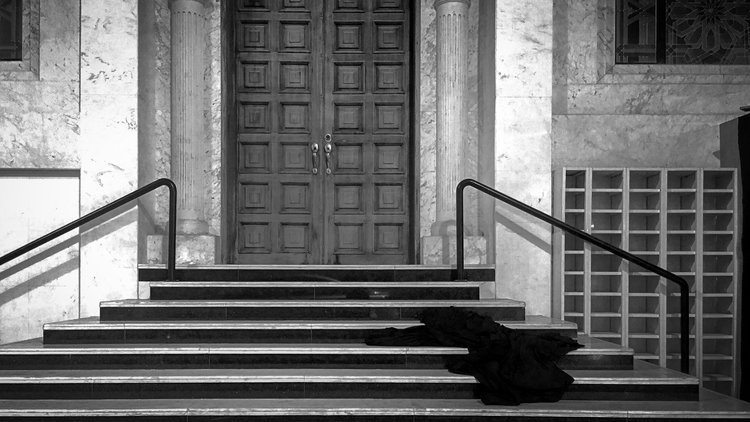 Prepping for the 10-day long rituals of remembrance, the heart of the country —Manama, the capital— gets draped in black clothing declaring the season of mourning. 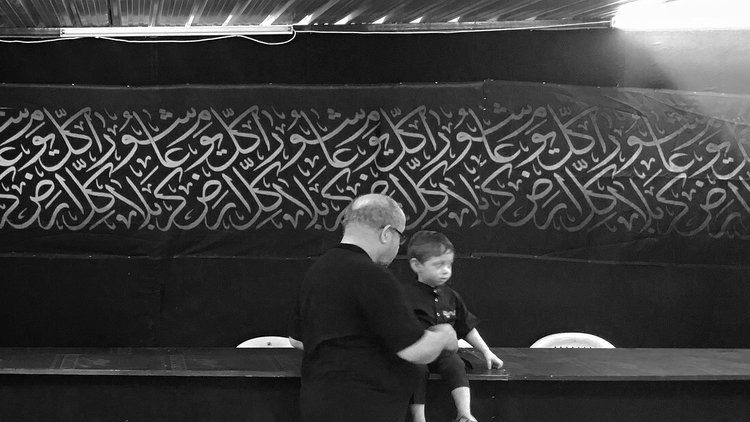 The black flags, the recitations of poetry, and the wailings are all sights engraved in our memories from a young age. The astounded look on kids witnessing the processions for the first time is always an intriguing sight. I feel like walking up to them to tell them how mutual the astonishment is. 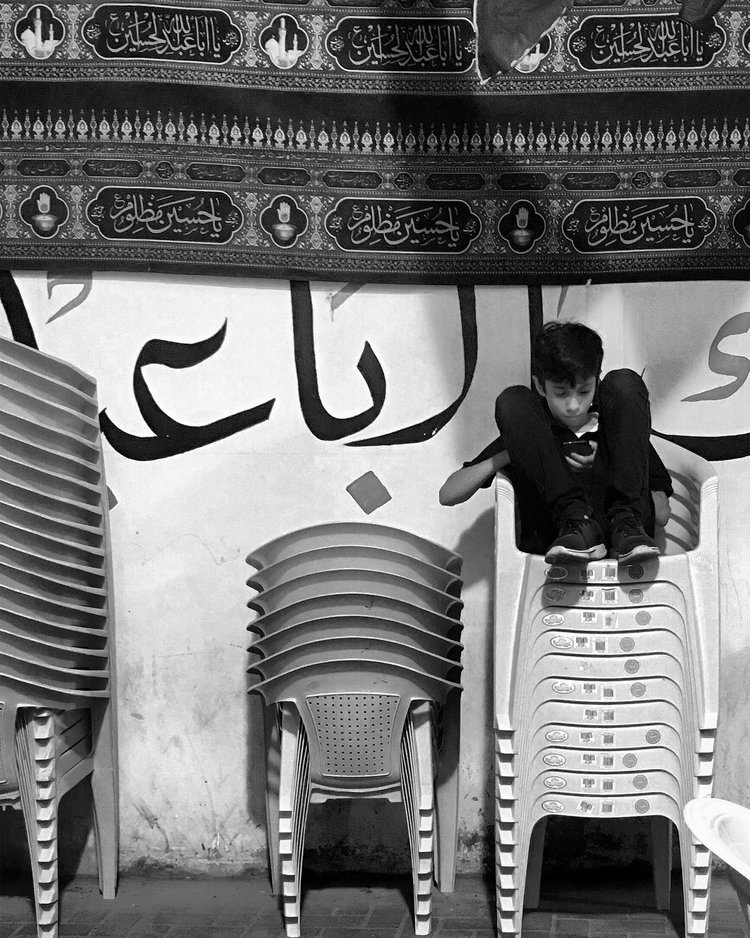 Then we grow up. And all we accumulate from the rituals is the trivialities of mourning; the black attire and the slogans. In my second or third year of university —no longer tolerating my state of incomprehension— I went to a local bookshop and asked for a book that explains the tragedy of Karbala. I remember being royally scolded by the storekeeper for trying to play catch up. After he was done roasting me on how attending Muharram lectures is by far the best way to pick up an adequate knowledge on the different aspects of Ashura, he coldly recommended one book as a starter. 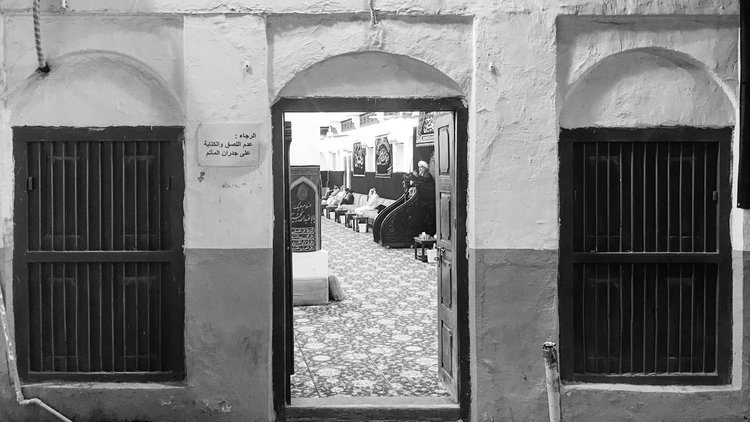 The storekeeper was right. I snoozed my way during Muharram lectures. Though in my defence, I lay the blame on the lecturers. Most lectures tend to solely dramatise events to provoke awes and tears, without giving a fair intellectual dimension that speaks to the mind. Some lecturers even spew their personal plain bigotry that completely contradicts with the ethos of Islam. I wish speakers would start their lectures with a note along the lines of: “Please don’t accept my analysis as truth just because I said so. Also don’t completely dismiss it if it succeeds in challenging your preconceptions. Do your own research.” 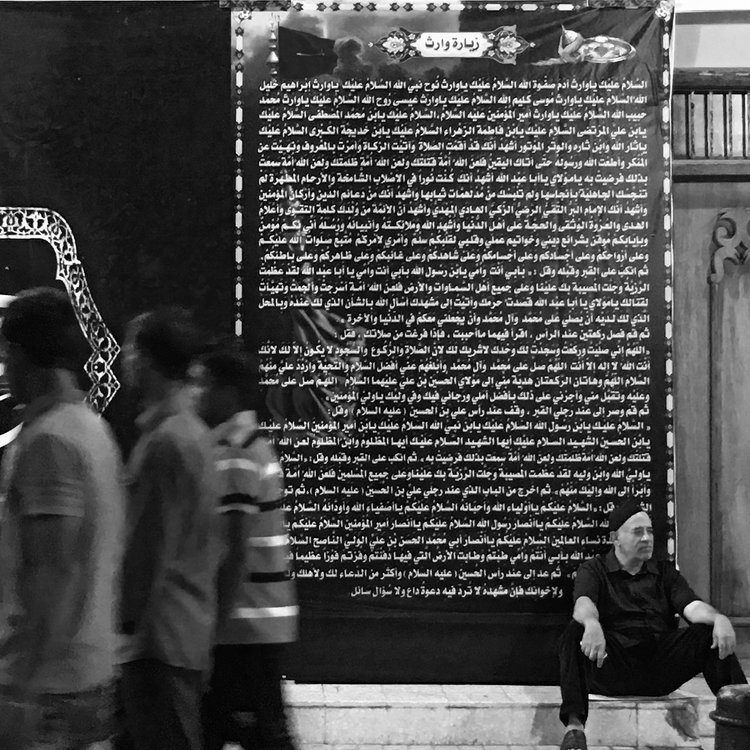 Observing Ashura is an annual pilgrimage and a display of loyalty. There are many formal visitation scripts that have been preserved throughout history that show us how to perform a visit with the respect it deserves. One of which is Ziyarat Warith: Visiting the Inheritor (the inheritor of the prophetic legacy). Stopping only to imagine the responsibility of carrying out a divine legacy is by itself such a heavy burden. So testifying and bearing witness to the distinction of Imam Hussain can only come from scrutiny and sincere conviction.

Confession: I always found it hard to participate in the walking processions —particularly in Manama. The reason being of how loud they turn into. Instead of a prestigious march that oozes with grief and sorrow, most processions feel like an immature masculinity competition of who can beat his chest harder to the rhythm of the tune. It’s too far from mournful. 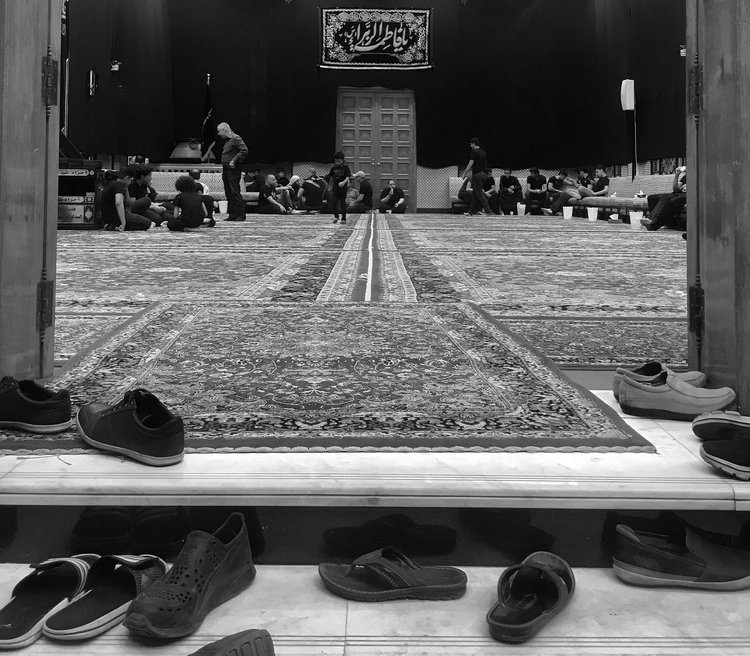 All customary practices aside, flocking to Muharram’s annual lectures has to be the centre of the mourning rituals. It is only through this tradition we get to contemplate over and learn from history. The lineage —the golden lineage— of Ahlulbayt is the embodiment of immaculacy. 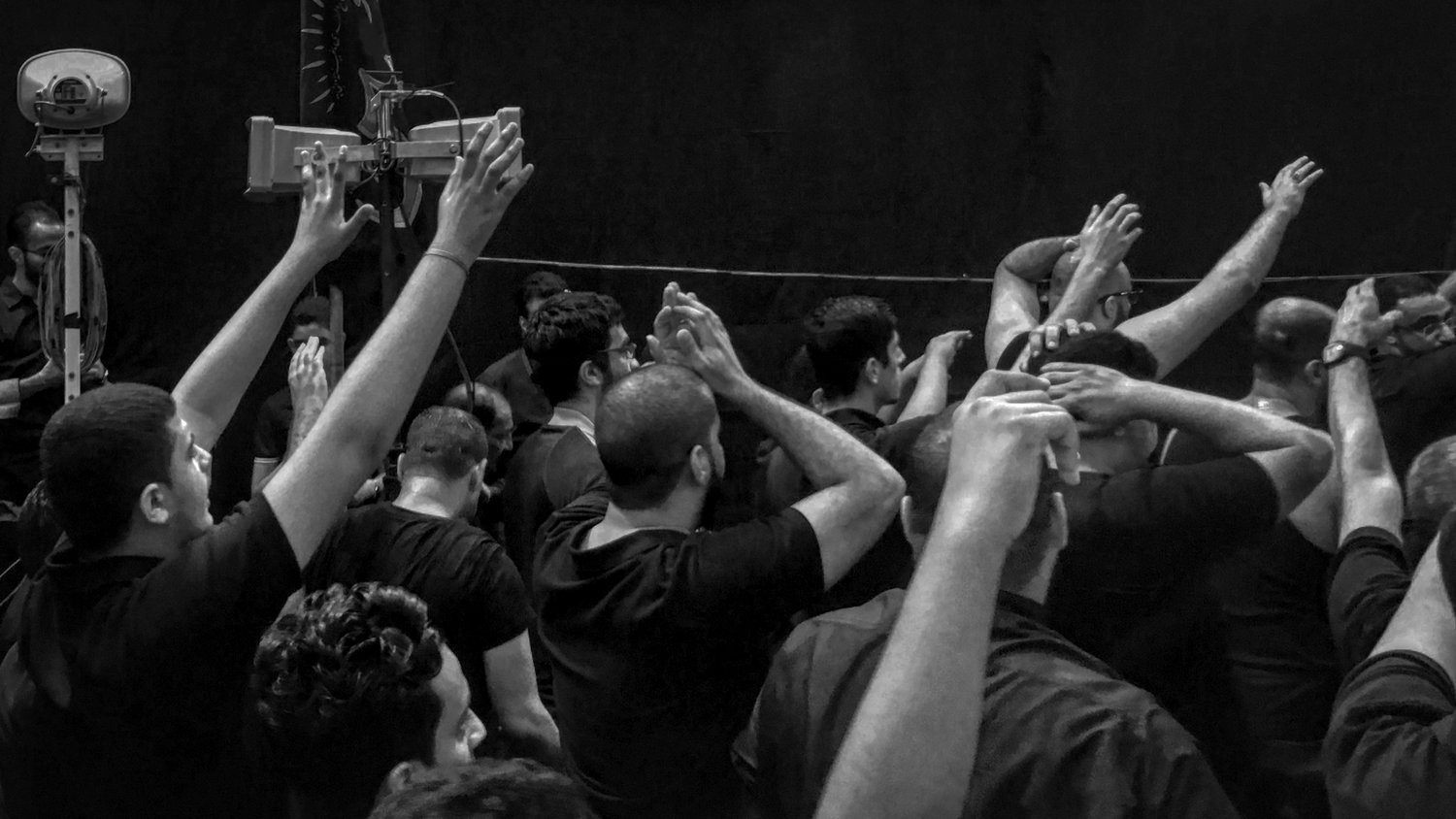 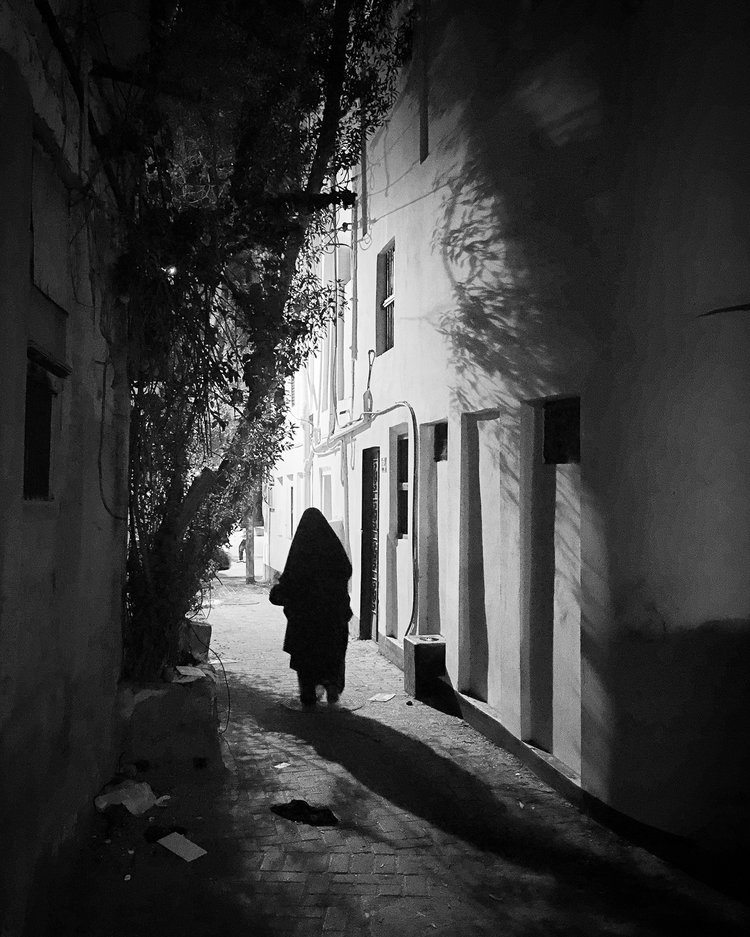 “Beyond this place of wrath and tears
Looms but the Horror of the shade,
And yet the menace of the years
Finds, and shall find me, unafraid.”
— Invictus by William Ernest Henley. 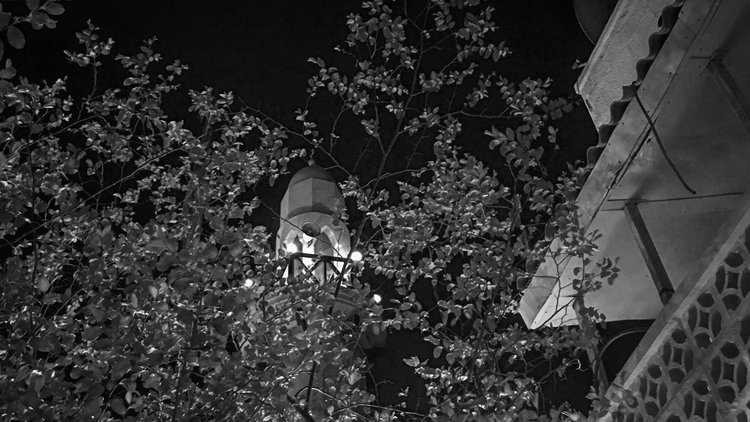 The word of God has been guarded through the sacrifices and the movement of Ahlulbayt. 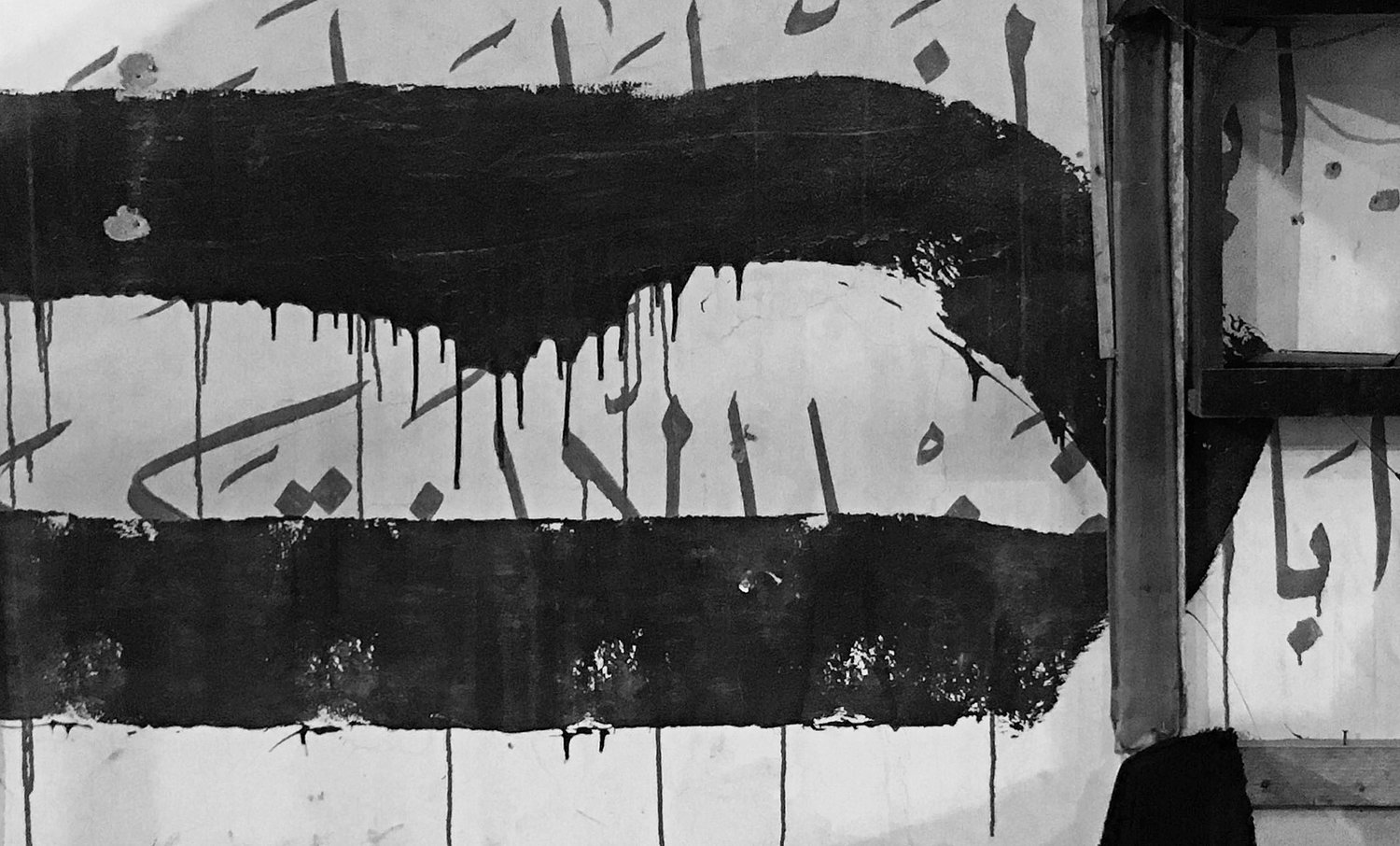 History, however, is often disrespected. It is disrespected by not giving it the gravity it deserves, or worse, by sabotaging it from within with fables and fabrications. The truth, either way, becomes too difficult to read. I visited Mecca and Medina once. I was deeply saddened by how little heritage is preserved. “The city is now surrounded by the brutalism of rectangular steel and concrete structures — an amalgam of Disneyland and Las Vegas.” (Sardar, Z. 2014, The Destruction of Mecca). But the truth cannot stay hidden for long. Amir Sulaiman passionately recited in one of his poems:

It is easy to scope mourning to the pictures associated with it, but that would be a surface-level meaning. I take it that true mourning can only be inferred; exhibited with the reverence of silence. To have —amongst all the distortion— sought for truths and was weighted down by the repercussions. Dr. Ahmed Al-Waeli —a theologian who was ahead of his time— improvised those lines with earnest sentimentality, Translated from Arabic:

“Oh Messenger of Allah,
The one who carried all virtues and mercy to this world,
Look upon us with your soul in these bleak black nights
To see what has become of your Ummah
To see the division that has befallen it
To see the debasement and disgrace that have garbed it
It has distanced from your message
It has distanced from your soul, as the earth to the sky
Until it got ridiculed by the lowest of people
It got ridiculed by the hands of treachery and was beaten so severe a beating.”

This, I submit, is what it means to mourn; understanding the feeling of —in the words of David Foster Wallace— “having had, and lost, some infinite thing.”