#SufiComicsSundays: With so much inequality in the world, why doesn’t God do something?

We live in a world of stark contrasts; a world where the rich are getting richer and the poor are getting poorer. Or better yet, a wealthy businessman spends £3 billion on a yacht made from solid gold and platinum, while 300 million children around the world go hungry every day. 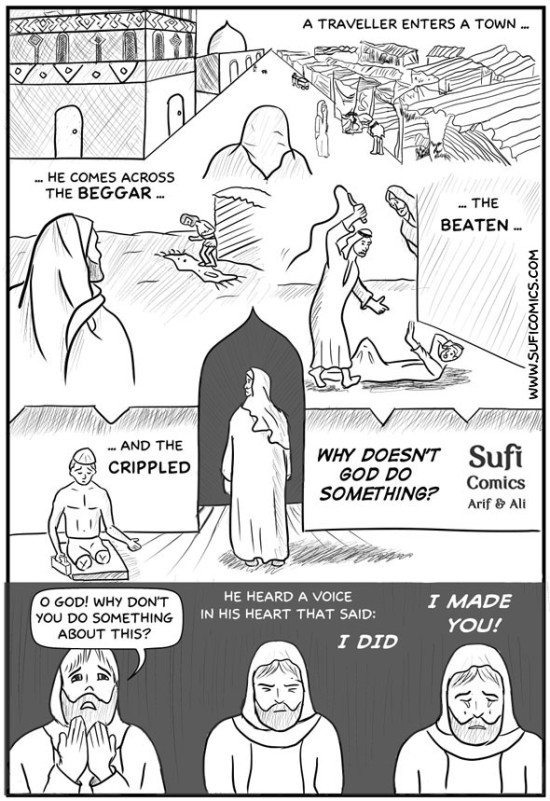 The richest 300 people in Europe and North America have the same income as 4.7 billion poor people.

Citizens around the world struggle for their basic rights and freedoms, whilst powerful and corrupt leaders still rule.

Inequality surrounds from the top to the bottom. We only have to go outside to witness it. And it’s depressing. What can one man or woman do? It seems like only divine intervention can get us out of this mess.

But the Qur’an has something different to say.

“Allah does not change the condition of people until they change what is in themselves.” (13:11)

Society doesn’t reform, till the individual takes responsibility for their actions. Think about it. How can society reform if the individual doesn’t care enough to take any action?

Change begins with ourselves.

It starts with us.

It starts with you.

It starts with me.

Sufi Comics
Sufi Comics' aim is to simplify spiritual wisdom from Islamic traditions. They contain nuggets of practical advice to help you to nurture your soul and find inner peace. Get a free copy of 40 Sufi Comics ebook from: http://get.suficomics.com