“You do not live on the earth, you are passing through it’’ – Jalaluddin Rumi, Persian Sufi poet of the 13th century.

Present-day Muslims in every corner of the world are undergoing turbulent times of unease and trial. Civic wars, economic decline, humanitarian crisis, deprivation of basic needs, hunger and social injustice, floods of refugees, and the formation of an image of Muslims as someone begging for help and assistance – all this shapes the daily life of Muslims.

To add, there are also reproaches in underdevelopment, economic stagnation, and a failure to meet Western civilization standards and trends. Westerners are setting a demarcation wall saturated with the spirit of the West: democratic values, women’s rights, and an eco-friendly approach to things.

Regarding the last reproach, should Muslims be eco-Muslim? Or is he(she) already programmed to be so? To put it differently, does being Muslim automatically presuppose being eco-Muslim?

Developing the last thesis, I would rather insist that Islam bears an eco-friendly nature. A harmonious relationship between nature and man can be positively established.

It sounds not as utopian alongside the post-industrial and technological trends of contemporary societies, but this possibility is proved throughout the historical development of Muslim lands.

So should Muslims wait for Greta Thunberg to appear among them who will raise awareness of thinking ecologically?

The answer is negative.

The environmental tendencies are already inherited from previous generations and thus are imprinted in Muslims’ mentality. Muslims in their historical development have never polluted their reputation in settling colonies, exploiting nations, using child’s labor (as in the zeniths of Industrial Revolution in England).

Modern Muslims must be proud of their ancestors in al-Andalus, Muslim Spain from the 7th to 11th centuries. One of brightest examples of the so-called eco-tend is the development of agriculture. Andalusian Arabs actually pioneered methods of cultivating crops and introducing new plants (eggplant, caffe, limon, lime, apricots, orange and fig trees). To name just few more: watermelon, spinach, and hard type of wheat – a basic for the widely known pizza.

As unvarnished evidence to it serves the Spanish words that bear Arabic origin. The adaptation of the Eastern seeds to the Western climate went through carefully prepared stages: an irrigation system to avoid droughts typical to hot summer periods, engineering innovations: the floodgate, irrigation ditch, waterwheel, and water mill. Again, the Spanish words reflect its Arabic roots.

The spirit of the ‘’harm-me-not’’ approach was explicitly seen in these innovational ideas. To take the example of the watermill: In 1492 the Spanish Catholics who restored their dominance over Granada, the last Muslim fortress in Spain, were unarmed and disoriented to take care of abandoned fields. Their poor agricultural experience was not comparable with the Arab heritage of cultivating the land. The Muslims taking care and improving fields for better crops djd it not in an aggressive way, but did it in line with amanat principle. The Spaniards failed in taking care of the land as amanat for not treating it as amanat.

Muslims call themselves as a creature of Allah who lives among billiards of other creatures. Muslims must therefore finds themselves in nature and within the borders of nature.

Nature, ‘’all between heaven and earth’’ (3:6) metaphorically formulated in Al-Qur’an, is a common home to dwell in. The proper attitude to it is already placed in Quranic verses.

Nature is spread around in abundance and beauty, earth is fertile and plants grow in every kind (50:7-8). All is a bestowed mercy from Allah for man. Nature is a deep reservoir of Allah’s signs to discover which man is instructed.

Due to the capacities of the mind of man as ‘’man of understanding’’, we see things differently and for example, the alteration of day and night is regarded as one of amazing Allah’s miracles (3:191). Nature can be taken as amanat for man.

‘’Indeed, in the creation of the heavens and the earth and in the alternation of night and day, and in the ships which sail in the sea with that which profits men, and in the water which Allah sends down from the sky and quickens therewith the earth after its death and scatters therein all kinds of beasts, and in the change of the winds, and the clous pressed into service between the heaven and the earth-are indeed Signs for the people who understand‘’ (2:164).

The accent is laid on sky, wind, and clouds that serve on the earth but not serve the needs of man that presupposed the warranted possibility for further exploitation. Here finds itself the evident difference with the Biblical vision of man as the ‘’crown of God’s creation…that can sound the heartbeat of its Creator….reflects God’s own relational richness…’’ (Genesis 1:29-31). The dramatical human and natural costs of the brutal process of colonization launched by Christian European nations have found its justification in sacral texts.

Contrastingly, there are no hints on aggressive imperatives in prescriptions of how Muslims should treat the earth. The gnoseological aspect is read in every word, man is rather coming closer to knowing Allah through exploring the earth.

Man goes ‘’through nature’’ as a curious observer, not an obsessive exploiter. How can man be an exploiter in the earth where Allah knows about everything: ‘’And there falls not a leaf but He knows; nor is there grain in the deep darkness of the earth, nor anything green or dry’’ (6:60).

Man is, thus, a temporary guest, a lonely stranger, someone who inherits in status of an inheritor the natural resources around and someone who is obliged to transmit them to the generation coming after. The illustrative ayat in this degree is 165 from 6th sura:

‘’He is the One Who has placed you as successors on earth and elevated some of you in rank over others, so He may test you with what He has given you. Surely your Lord is swift in punishment, but He is certainly All-Forgiving, Most-Merciful’’.

As it is seen the key term is خليفة ‘’khalaifa’’, but it is variously translated even by generally accepted translators. So, man in relation to nature can serve as “successor’’(Dr. Muhammad Khattab), “one who inherits” (Muhammad Asad), ‘’His agent’’ (Yusuf Ali), ‘’viceroy’’ (M.M. Pickthall), or “overlord’’ (T.B. Irving). These two last translations resonate the political aspect of man’s role on the earth. Surprisingly, why did British (M.M. Pickthall) and Canadian (T.B. Irving) translators – both converts to Islam – point out the aspect of a legitimized political power in definition of man?

Historical analyses manifest the circulation of a highly pretentious view of a political leader of the Muslim umma – sultan or khalif – as Allah’s viceroy starting from the Abbasids dynasty. The khalif henceforth became not a successor of the Messenger of Allah, but a successor of Allah. The title – man is khalif meaning ‘’successor’’ – that directly derives from the abovementioned ayat,  is attributed to everyone – the title is apolitized per see.

But still a slight linguistic inquiry sheds a light on aptness of English word ‘’successor’’. Man is a humble successor, a modest walker passing through the earth. If man fails in usage of nature and it will turn to merciless misuse so, as the following line of this ayat conveys, God’s trial comes immediately:

“So He may test you with what He has given you’’.

What is given for time is considered generally as something entrusted and is termed ‘’amanat’’. There are two Quranic verses that cover explicitly the ethical side of this act (8:27 and 23:8): ‘’not to betray amanat’’ and to be ‘’faithfully true’’ to amanat.

This is telling us not to betray God’s trust in man as a ‘’successor’’ on the earth. Man is chosen and exalted above other God’s creatures, man possesses consciousness and free will, thus, higher responsibility causes higher demands, among them is taking nature as created by Allah, where millions of signs hidden, man must study nature for getting closer to Allah’s miracles.

Nature is thus a long way for Muslims to come through not to litter during whole process, but to be careful and curious in every taken step to be able to hear miracles around.

To remind in conclusion that without adamant faith in the heart, genuine curiosity in setting research questions, and inexorable persistence in seeking answers, Muslims could never reach what is termed the Golden Age of Muslim Civilization, or the period of ground-breaking and truth-opening discoveries in the sciences from astronomy till optics in 8-14 centuries.

In the theological sense, Muslims will not allow themselves such deviations in the form of deism, for God creates the world and intervenes no more, or pantheism or putting the sign of equality between God and God’s creatures. Moreover, in daily life contexts, such phrases like ‘’look we see the spreading of viruses, nature punishes man for its exploitation’’ or “nature did it that I had such a  pretty baby” should not slip from a Muslim’s mouth.

Muslims should never forget other Rumi’s words: “The world is a mountain, in which your words are echoed back to you’’.

Careful treatment of nature – like entrusted amanat – echo back in the careful outcomes such harmony and calmness.

Arabic Influence on the Spanish Language 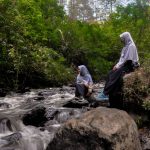