Muslim woman pictured on Westminster bridge after attack speaks out

The Muslim woman who underwent criticism online for seemingly ignoring an injured man after the Westminster attack has spoken out.

We all saw the picture of the hijabi women seemingly walking by an injured victim on the afternoon of Wednesday 22nd March. Unfortunately, we also saw the Islamophobic and racist rhetoric that came once the image hit social media.

The picture, which will not be shared here out of respect for the woman, was met with unforgivable comments on social media from far-right and anti-Islamic accounts.

Through their support service, TellMAMA was given a statement by the Muslim woman about what really happened. Here it is below in full:

“I’m shocked and totally dismayed at how a picture of me is being circulated on social media. To those individuals who have interpreted and commented on what my thoughts were in that horrific and distressful moment, I would like to say not only have I been devastated by witnessing the aftermath of a shocking and numbing terror attack, I’ve also had to deal with the shock of finding my picture plastered all over social media by those who could not look beyond my attire, who draw conclusions based on hate and xenophobia.

My thoughts at that moment were one of sadness, fear, and concern. What the image does not show is that I had talked to other witnesses to try and find out what was happening, to see if I could be of any help, even though enough people were at the scene tending to the victims. I then decided to call my family to say that I was fine and was making my way home from work, assisting a lady along the way by helping her get to Waterloo station. My thoughts go out to all the victims and their families. I would like to thank Jamie Lorriman, the photographer who took the picture, for speaking to the media in my defence”.

The sharing of the photo online has caused her distress and fear, hence why we have not published the photo.

Photographer Jamie Lorriman, who took the photo, told The Independent, “I wish there was something I could do about it being misused and misinterpreted… It’s people who clearly have an agenda they want to push and will just put whatever they think out there.”

A wonderful response Tweet to the reaction also went viral: 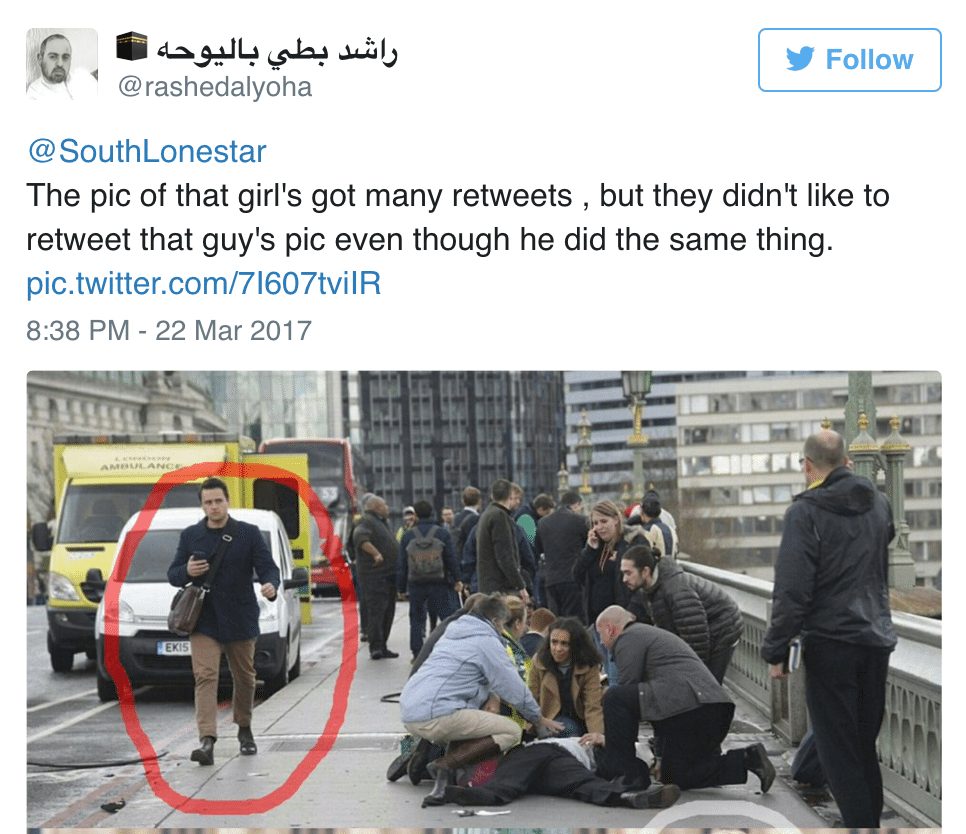