On Wednesday 14th June, London woke up to the tragic news of a fire in Grenfell Tower, a high-rise residential block of 150 apartments in Kensington, West London. The police have confirmed the deaths of 17 people so far, but that number is expected to rise significantly as search and rescue efforts continue.

Local community groups, Londoners across the city and in particular Muslim organisations, have rapidly responded to the disaster in a bid to provide the families affected with as much support possible. Hundreds of thousands of pounds were raised within 24 hours and support centers close to the incident are overflowing with donations of food, clothing and bedding.

Local charities are asking now solely for financial donations towards organizations that are supporting the victims.

Community groups have been working tirelessly since the news broke to offer their support. With hundreds of residents with absolutely nowhere to go, the local sports centre has been transformed into a place of refuge and support for the displaced. Coordinated by various different individuals and groups, a number of Muslim charities have been extremely active on the ground working alongside the likes of the Salvation Army, British Red Cross, Sikh communities, Christian faith groups and many more.

Muslim Aid is one of those charities that has been offering support to the families affected. They have collected over 60 tonnes of supplies as well helping to raise over £73,000 alongside Islamic Relief. What is staggering is that as we are in the month of Ramadan, most of their volunteers would be fasting. Madiha Raza, their senior media coordinator was blown away by the energy levels and morale amongst the volunteers:

“The incredible generosity of the Muslim community was even more pronounced given that most of them were fasting and temperatures during the day soared to the mid 20s. This however, did not shake their resolve as they continued to work hard throughout the day until dusk, without food and water to help the families in need.”

Penny Appeal have also been active in helping at Westway Sports Centre which has been set up as a rescue and refuge centre for all the displaced families. Volunteers have worked tirelessly throughout the day and night to help to sort and transport the tonnes of donations that have come flooding from all across the city and beyond.

The response from medical volunteers has also been phenomenal. Health professionals including dentists, pharmacists, doctors, psychiatrists, and even students have all stepped up to offer their time and expertise.

Annie Shamsi, a Chartered Psychiatrist utilised her experience in dealing with trauma victims in Greece and Iraq by offering written and practical advice for volunteers on the ground dealing with emotional wellbeing and support.

Dr Munir Datoo liaised directly with the Out Of Hours Service to recruit volunteer doctors from the Muslim community and the response was incredible.

One Doctor who tried to volunteer said:

“They don’t need doctors at the moment, they emailed me back to say they had been overwhelmed by the response”

Students and professionals in the local area, including some on annual leave, have offered to stay on standby as and when required.

Helping to feed the 300+ volunteers this evening at Westway Sports Centre are the World Federation of KSIMC, another Muslim charity with their office in North-West London. They’ve been working closely alongside Penny Appeal and are providing dinner/iftar this evening for everyone at Westway.

Shabbar Dhalla the Vice President of the World Federation of KSIMC had this to say: “In the face of this horrible tragedy, it’s inspiring to see individuals and organisations across the board uniting for a common cause.

People looking to help have had to be turned away at Westway as there are just so many people volunteering. It’s truly inspiring!”

At a community level, Mohamedali Gokal from Hujjat Islamic Centre in North-West London was part of the team coordinating the collection of over one hundred kilos of supplies from his local community in just a few short hours.

“In the few hours since we recieved news of the fire, the mobilisation was just astonishing. We sent round a message to community members on WhatsApp and next thing we knew one lady had set up collection sites in different areas across the community. Initially it was just family and friends but by the of end of the day we recieved goods from people of all backgrounds: Muslims, non-Muslims and some who had travelled from far off. It was overwhelming.”

An hour before the scheduled Ramadan program began at the community centre, volunteers began flooding in asking if there was anything to be done. People offered to donate money, help organise collections and even drive to deliver food where it was needed. Everyone was desperate to do all they could to help. 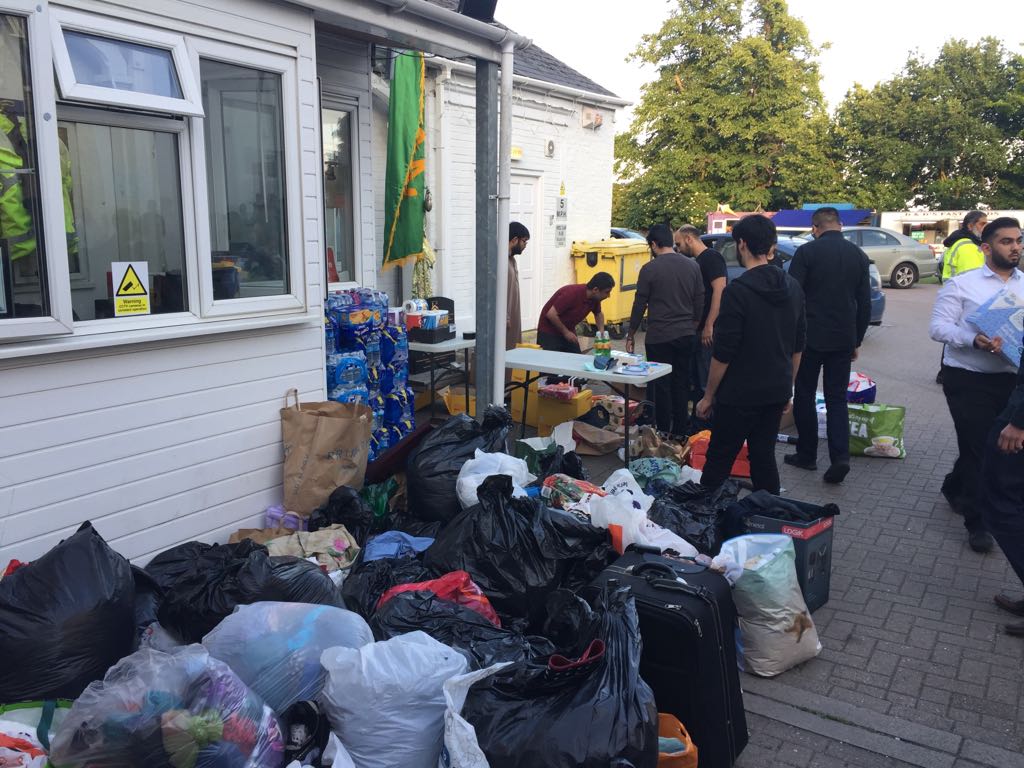 “Every few minutes we are getting phone calls from members of the community asking what they can do to help. People are volunteering to take time off work to go anywhere their assistance is required!”

Mohamedali told me about three volunteers who drove around West London all night to deliver food and bedding to different centres whilst they themselves were fasting. Some of these volunteers were on the road at iftar time and only made it back home after midnight. Hujjat is just one example of the many community centres across London that have been orchestrating an aid effort.

Early on Wednesday morning a video surfaced (below) of a local resident praising the ‘young Muslim boys’ who were amongst the first on the scene and ran into the building to help save people’s lives, as well as handing out bottles of water to people who managed to escape.

As both a Londoner and a Muslim, this event has been particularly heartbreaking. But seeing ordinary Londoners and Muslims rallying together in this difficult time serves as a rare moment of inspiration and hope in humanity. I would like to salute the efforts of the emergency services and volunteers who have given up their time and comfort to help families who have lost their homes and loved ones.

The difficult task of picking up the pieces of their lives is only just beginning. But together we can make a real difference.