The struggles of being a Muslim feminist

I was in a different college class when my new Spanish lecturer walked in. She announced to the class that she was a feminist. As a young 19-year old at the time, I had a false view on what feminism was. I thought it meant Western women telling the rest of ‘us’ (women of colour and of diverse cultures) what to do and what not to do. I was under the impression that feminists were extreme women who wanted all women to be like them, dress like them, and think like them.

Unfortunately, a lot of minority women, including Muslims, are left on the side lines by mainstream feminism.

My lecturer once singled me out in class as being ‘oppressed’ during a discussion on people’s different views. At the time, I was surprised. Admittedly, I was sporting a baggy shirt with a scarf that covered my hair, but I still felt very uncomfortable to be categorized as the odd one out just because of my outfit. Also, she never asked my point of view on my choice of clothing. That’s when it hit me – she had labelled me as ‘oppressed’ without even asking my opinion on the matter. I understood why she would have thought that I was a victim of oppression; there’s always a news story about women being forced to cover in the Middle East- but I wasn’t from the Middle East, nor was I oppressed.

In fact, I remember thinking that I was being ‘oppressed’ by her because she was labelling me unfairly without even asking me what I thought of the issue. It is no one’s right to speak on my behalf, I can speak for myself. Feminists have fought for centuries to have their own voice so that men don’t speak on their behalf. Similarly, I did not need someone who didn’t bother to find out what I thought, to speak for me. That incident really impacted my life and I still remember feeling the lack of belonging based on what I wore and who I was: a Muslim woman wearing a headscarf.

I still feel this way, even nowadays, but in a different context. With years, my knowledge on feminism expanded passed my previous misconceptions as I realized it was about women’s struggle for equal rights. I started identifying myself as a feminist because I have always been proud of being a woman. But then I noticed that mainstream westernized feminists such as European Feminist movement FEMEN would not recognize me as a feminist. In fact, I would be someone they’d actively protest against, all because I was a practising Muslim woman which couldn’t coexist with being a feminist, according to them. But I choose to differ, for who defines what it means to be a feminist? There are many branches within feminism, such as intersectionality, which fights for the struggles of non-white women of a lower economic class and recognizes that different women may have variations of struggle due to being of a specific gender, race and class. 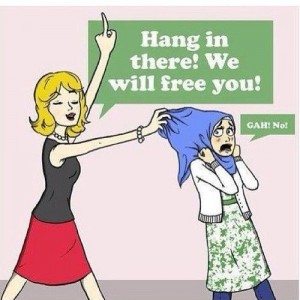 o my struggles as a Muslim woman may be different to that of a French FEMEN protester, but at the end of the day, aren’t we all women fighting for the same principle, which is for all genders to be treated equally? Then why is there still a disagreement between some mainstream feminists in regards to treating other feminists who may have “different” belief systems and ways of dressing? As a feminist, I believe every woman has a right to do what she wants, out of her own choice. If I as a woman choose to practise my religion and cover my body, that is my own choice. No one has the right to judge me, just like I do not have any right to judge anyone who practises differently.

Unfortunately, a lot of minority women, including Muslims, are left on the side lines by mainstream feminism. This is due to differences in belief systems, which should not be the main concern. My Spanish lecturer identified as a strong feminist, but ironically did not let me have a say regarding myself. She stereotyped me instead of letting me feel equal and respecting my viewpoint, even if it may differ from hers. The umbrella of feminism should include everyone, no matter their beliefs or dress code; and respecting each other’s way of living as well as fighting for the same cause of equality. But if, within the umbrella, there’s a conflict because one feminist labels another and thinks they are “right”  (there is no “right” type), then we cannot unify and fight for equality.

Let’s face it, being a feminist in itself is kind of tough, as we are fighting against the media’s representations of women. We are not getting equal pay checks, and being stigmatized as we’re called “feminazis” on social media. But being a Muslim feminist is even tougher. Not only do we go through all of the above, but sometimes we also have to face prejudice from our fellow feminists. Many of them want to ban the head veils we wear but no one asks us what we want. This causes resistance from Muslim women like me, who are comfortable with what they wear. The problem is that instead of asking Muslim women why they cover up or do whatever they do, there’s a stigma that contributes towards developing negative generalizations and misconceptions. It is sad when everyone sticks to their own ignorant prejudgments without opening our minds to new perspectives. Because of that, some Muslim women such as Nadia Chan choose not to identify themselves as feminists even though they may be advocating for women’s rights.

Nadia, a London based Muslim-prisoner’s rights and anti-racism campaigner as well as a women’s rights advocate, states that she does not like to be classified as feminist as she believes its very Eurocentric.  “With regards to mainstream feminists, engaging with them on any level is a struggle for me, ultimately they don’t recognise their privilege and hypocrisy and for that reason I do not engage with them” she says. She campaigns for women’s rights but feels attacked by mainstream feminists because of her religion.

“As a Muslim woman, I’m frustrated that we are continuously faced with attacks from the white feminists – whether it’s other dress sense/dress code, or our fundamental beliefs. White feminists can be very ignorant,” states Nadia. She believes that mainstream feminism has been used as a tool to promote “every possible imperialist agenda like bombing brown women so they’re ‘safe’ and make it okay to preach racist stereotypes about Muslims.” Nadia also feels that she does not need mainstream feminism to empower her, as her faith already has.

The important thing to remember is that no matter what religion one is from, or what kind of clothing one wears, or what culture they practise, we all fall under the banner of equality and all have our own right to choose whatever we want to do.

Whether one agrees or disagrees with Nadia and the like, the main issue is that her view of feminism was formed in a negative light. This was due to mainstream feminists protesting to ‘liberate’ Muslim women without letting Muslim women have any say, and making assumptions that generalize all Muslim women without recognizing their individuality, freedom of choice, and personal opinion. Ironically, this is the opposite of ‘liberation,’ as it is forcing women to do what they may not be willing to do. This is a struggle for Muslim feminists like me, who passionately want to be included in the feminist club but are left out because we are made to feel different as our perspectives don’t seem to count. Instead of being welcomed, it seems like we are under attack for letting our beliefs and dress-code ‘oppress’ us. But who is a better judge of how oppressed one is, if not they themselves? And if one doesn’t feel oppressed (may be even empowered like Nadia claims) by what they believe in, no one else can keep pushing a label of oppression over their heads.

The important thing to remember is that no matter what religion one is from, or what kind of clothing one wears, or what culture they practise, we all fall under the banner of equality and all have our own right to choose whatever we want to do. So my advice is: next time you see a Muslim woman skip the assumptions and save your generalizations. Instead, go up to her and ask her what her views are before negatively labelling her. You never know, you may realize that you both have different ways of doing things, but share a similar ultimate goal.

Is Western Feminism Oppressing Girls And Women With Hijab?