Was that documentary REALLY what British Muslims think?

All week there has been widespread discussions about the results of a survey carried out by ICM for Channel 4. Yesterday evening, the documentary ‘What British Muslims really think’ finally aired and what became immediately apparent was that the sample of 1,000 or so Muslims polled was anything but representative of the entire 2.7 million British Muslim population. Furthermore, the documentary chose to paint a harsh picture of the statistics to fall in line with the argument and narrative put forward by Trevor Philips, who is ironically the former chair of the Equality and Human Right Commission.

Alarm bells began to ring from the offset when it was explained that interviewers would be surveying in area which had over a 20% Muslim population. By their own admission this would not be representative of 49% of the British Muslim population (those who don’t live in areas so densely populated by Muslims). That’s the views of almost one and a half million Muslims not being taken into account at all, yet the results are still brandished as ‘What British Muslims really think’.

ICM interviewed a sample where one fifth of the population was Muslim, and said that anything less wouldn’t offer a range (of opinions and beliefs?). Essentially, because these areas that are so densely populated by Muslims, are often constructed of one ethnic group or a group of people who are part of the same community and share the same beliefs and values; it’s like going to a little village in the middle of England. You’d expect that by and large the inhabitants of that town would share the same values. The very sample that ICM chose to poll restricts how broad a spectrum of responses they would receive.

It is also worth noting that according to the 2011 Census data, the one thousand people surveyed were not ethnically representative of the Muslims population of the UK, as pointed out by the Metro: 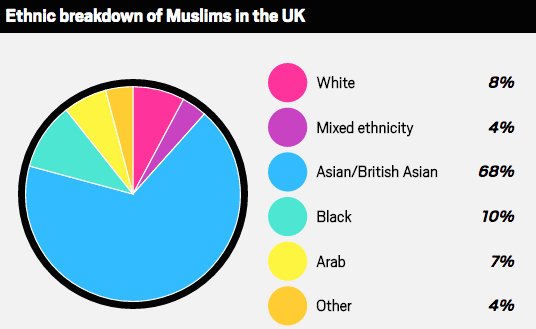 As you can can see, White and Arab Muslims were under-represented and in contrast, Asian/British Asians were largely over-represented by the poll.

“We understand the poll draws answers from areas where Muslims formed more than 20% of the population,” an MCB statement to HuffPost UK said.

“These happen to be some of the most deprived neighbourhoods in the UK with a disproportionately high number of people with a Pakistani or Bangladeshi ethnicity.”

“Choosing specifically to poll in areas that are poor and more religiously conservative, skews the results and makes it indicative of these areas and not of British Muslims nationally.”

Finally, during the interviews with British Muslims; when it came to the sensitive topic, they were handed a piece of paper and a blank envelope to place their answers in. This was to ensure they gave an honest answer, not just what was socially acceptable. In contrast, the control group (representative of the entire UK population) was polled via telephone. The assumption can therefore be made that in the control group, people would/may not have been entirely honest in their responses, to avoid ‘shame’ and would be embarrassed to voice their unsavoury opinions openly to the interviewer.

Whilst the sample is clearly unrepresentative of the entire British Muslim population and slanting towards areas of social deprivation, it’s still worth looking at the results and their findings. Trevor Philips and Channel 4 chose to look at and interpret the results in a pretty negative light, however it’s often just a matter of perspective.

For instance, more than a third of Muslims polled would report individuals who they suspected of seeking to participate in terrorism abroad to police. This was higher than the 30% in the control sample. Other polls have even found that 94% of British Muslims would report someone they knew who was planning an act of violence to the police. Naturally the fact that the poll found that a greater percentage of British Muslims would report than the control group was omitted from the documentary.

It was also found that of those polled, the overwhelming majority (96%) had no sympathy for terrorism and that support for ISIS was at just 3%. Furthermore, 47% agreed that Muslims need to do more to tackle extremism. There is clearly less of a problem with ‘extremism’ than is often made out in the media and by the likes of Mr Philips. The infamous headline from The Sun about “1 in 5 Brit Muslims’ sympathy for jihadis” definitely comes to mind.

96% of British Muslims have no sympathy for terrorism. #WhatBritishMuslimsReallyThink pic.twitter.com/w1jJdkBgty

The poll also shone a light on several issues such as gender roles in marriage, homosexuality and polygamy and found that relatively high percentages of the British Muslims polled had views which were considered by the documentary makers to highlight the growing ‘chasm’ between British Muslims and the rest of the population. As British society becomes more liberal and accepting of homosexuality and gay marriage, it’s apparently perceived to be almost un-British to have a view that is the contrary. That logic should raise the alarm about another group in the UK – the Evangelical Christians – whose population is estimated at two million. With a survey finding that 63% of Evangelicals believe that same-sex marriage is wrong, maybe it’s time we clamp down on these religious beliefs and impose British values on them too?

Interestingly, according to Ofsted, one of the ‘fundamental British values’ is “mutual respect for and tolerance of those with different faiths and beliefs and for those without faith.” Whilst the percentage of Muslims polled identifying as ‘British’ was higher than control sample, it’s ironic that Muslims in the UK are constantly under the microscope and our beliefs and values are constantly called into question by journalists, politicians and policy makers.

In the documentary title, if you were to replace the word ‘Muslims’ with ‘Jews’, ‘Hindus’ or ‘Sikhs’, you can imagine the outrage and anger from those minority communities (and rightly so) for being viewed as ‘the other’, but sadly the British Muslim community have become normalised to this. Documentaries such as this one, neither serve the purpose of speaking for British Muslims, nor work to build bridges between people of different backgrounds. It simply works towards alienating, isolating and marginalising Muslims further and fueling hatred at both ends of the spectrum.