Wearing Rings and Gemstones in Islam: Philosophy and Benefits

Most if not all Muslims agree that the Holy Prophet (pbuh) wore at least one ring, and this is something that is followed by Muslims all over the world.

Rings and gemstones have a special place in Islamic culture and history. Most if not all Muslims agree that the Holy Prophet (pbuh) wore at least one ring, and this is something that is followed by Muslims all over the world.

This article will seek to examine the Islamic philosophy and benefits of wearing a ring and a gemstone.

The Ring of the Holy Prophet

There are numerous hadith that mention that Prophet Muhammad (pbuh) wore a ring.

It is said that he acquired a ring of silver with Muhammad Rasoolullah (Muhammad, Messenger of Allah) on it, saying:

“I have acquired a ring of silver and engraved on it Muhammad Rasool Allaah, and no one should have an engraving like this.” 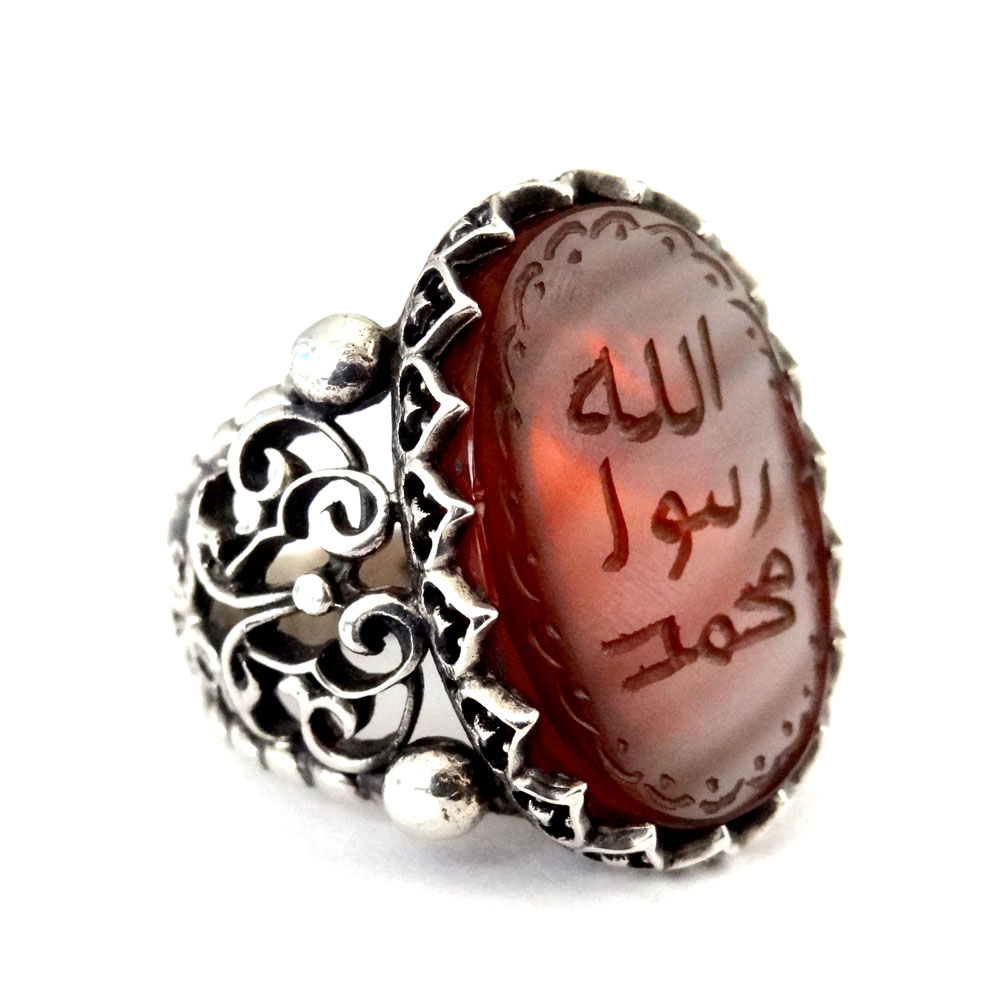 The Holy Prophet would specifically use this as his seal on letters. Another hadith affirming this says:

“When the Prophet (peace and blessings of Allah be upon him) wanted to send a letter to the Romans, he was told that they would not read any letter unless it had a seal on it, so he took a ring of silver. It is as if I can see it shining on his hand, and engraved on it were the words ‘Muhammad the Messenger of Allah.’”

While men are prohibited from wearing a gold ring, it is deemed mukruh according to some schools for either men or women to wear an iron, steel or brass ring (1). Other schools don’t deem it mukruh to wear an iron ring, but state that wearing a ring of silver is better. (2)

How to Wear a Ring

Among Sunni Muslims, there is a disagreement as to whether the Holy Prophet wore it on his left or right hand. According to Hanafi, Malaki and Hanbali schools, it is better to wear a ring on the left hand. Multiple reasons are cited, one of which being the following hadith:

It was narrated that Anaas (may Allah be pleased with him) said: The ring of the Prophet (blessings and peace of Allah be upon him) was worn on this – and his pointed to the little finger on his left hand.

Other arguments include it being the way of the Sahaba, with many reported to have worn rings on their left hands (3), as well as the fact that it would have been easier to use for stamping seals when holding a paper with one’s right hand.

The Shafa’i school of thought recommends wearing the ring on the right hand, citing the below hadith:

It was narrated from Anas ibn Maalik (may Allah be pleased with him) that the Messenger of Allah (blessings and peace of Allah be upon him) wore a ring of silver on his right hand, in which there was an Abyssinian stone, and he used to put the stone facing towards his palm. 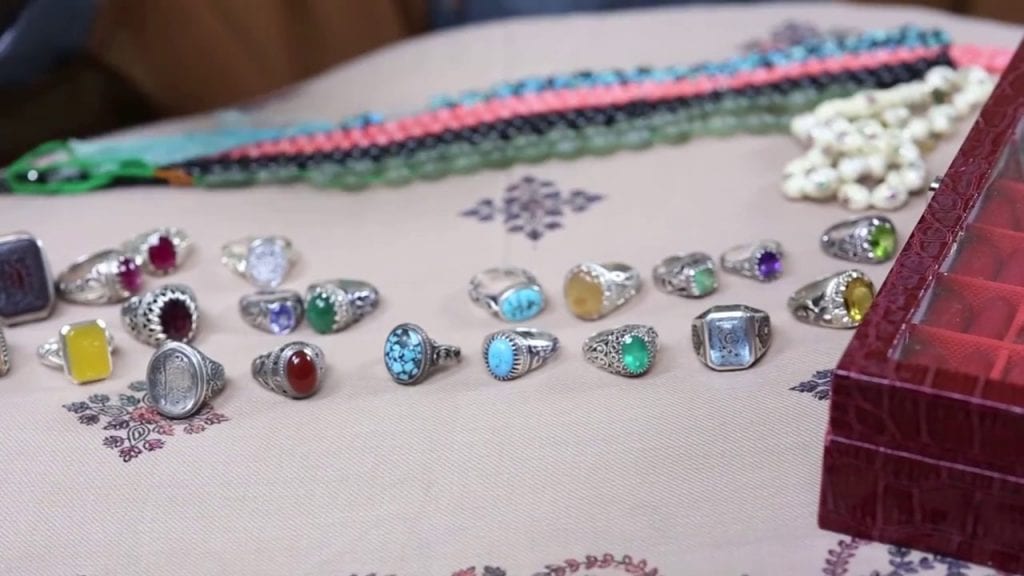 Besides other similar narrations, the argument of the school is also that the Prophet (pbuh) would always start with the right in daily tasks of adornment, such as putting on shoes and combing hair. Some also point out that there are also hadith that prominent Sahaba wore rings on their right hands, perhaps suggesting that wearing a ring on either hand is recommended (4).

Hadith suggest that the Holy Prophet wore the ring on his index finger. A narration attributed to Imam Ali says,

“The Messenger of Allah (blessings and peace of Allah be upon him) forbade us to wear rings on these two fingers” – and he pointed to the middle finger and the one next to it.

In Shia Islamic tradition, according to one narration, wearing a ring on the right hand is one of the signs of the believers (5). Imam Jafar Al-Sadiq says that a ring should be worn at the end of the finger, where it joins the palm. (6)

In another hadith, the Holy Prophet asks Imam Ali to wear a ring on his right hand so that he may be counted among the Muqarrabeen (those near to God). (7)

Many of the companions of the Prophet had engravings on their rings. Abdullah ibn Omar had his name engraved on his ring, while Hudhayfah and Abu Ubaydah had Alhamdulilah (praise be to Allah) on theirs. Imam Ali had a ring saying Allah Al-Malik, Allah the Sovereign (other sources mention it read, Allah is the Master of the Kingdom, or similar). (8)

Imam Hassan and Imam Hussain also had their rings engraved, with Al-Hasan’s reading: ‘Verily, All honour (as a whole) belongeth (only) to God’, and al-Hussains: ‘Verily God accomplisheth His purpose.’ (9)

Gems have a special place in Islam. One example of this is Al-Hajar Al-Aswad, the Black Stone, which sits by the Kabah and which Muslims are keen to kiss and touch.

Some believe that gems have the power to cure diseases, both physical and metaphysical. The finger is a direct link to the heart, and, according to some experts in the mysticism and scientific properties of gems, it is the energy of the gems that transfers itself from the stone into the body. (10)

The hadith mentioned earlier by Anas ibn Malik confirms that the Holy Prophet indeed wore an aqeeq stone (quoted as Abyssinian stone, also known as agate) on his ring. This means it is of the sunnah to wear an aqeeq stone.

In Shia literature, there are numerous ahadith on the benefits of gemstones, including aqeeq. 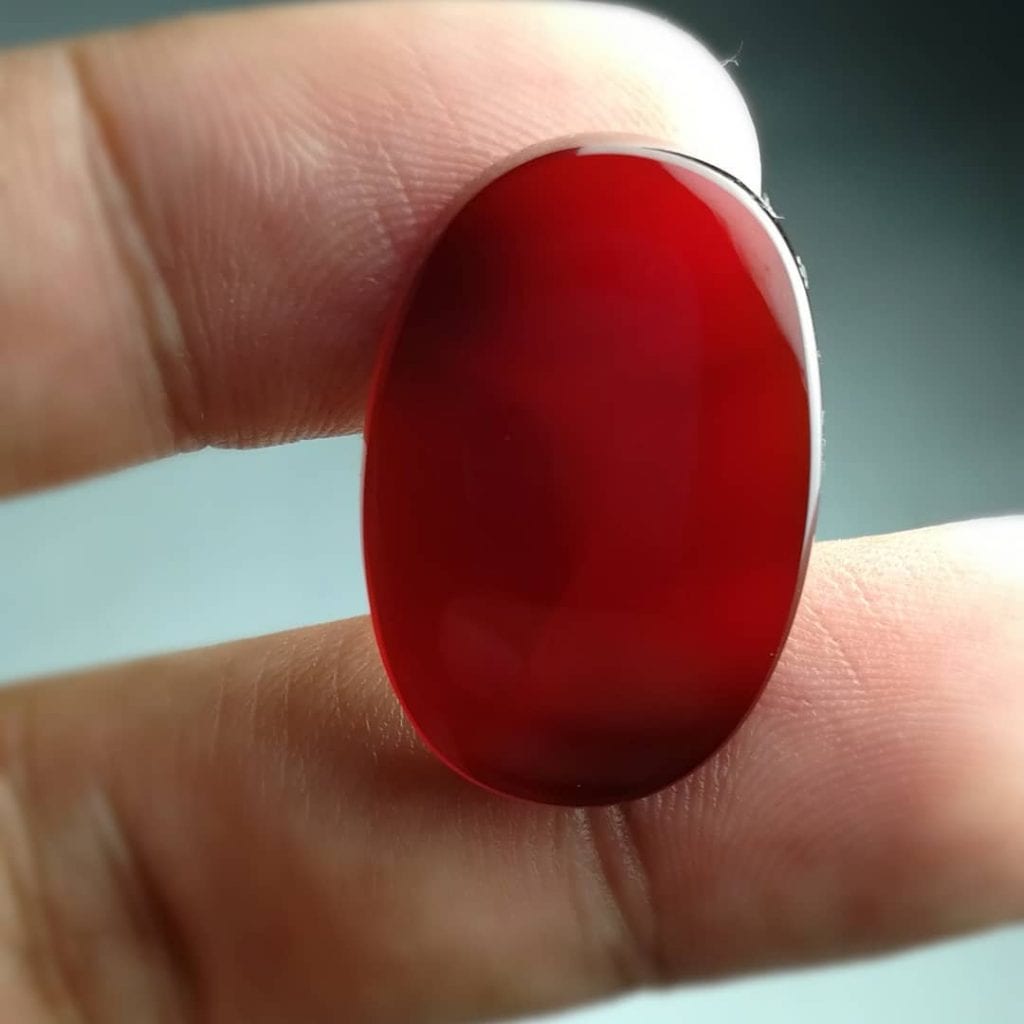 Aqeeq takes away poverty and dissolves difference from one’s heart.

It is also narrated from Imam Jafar Al-Sadiq,

It is also said that aqeeq helps calm the temper, protect against difficulties, helps lessen sorrow, bring luck when travelling and strengthens concentration among other qualities. (11) 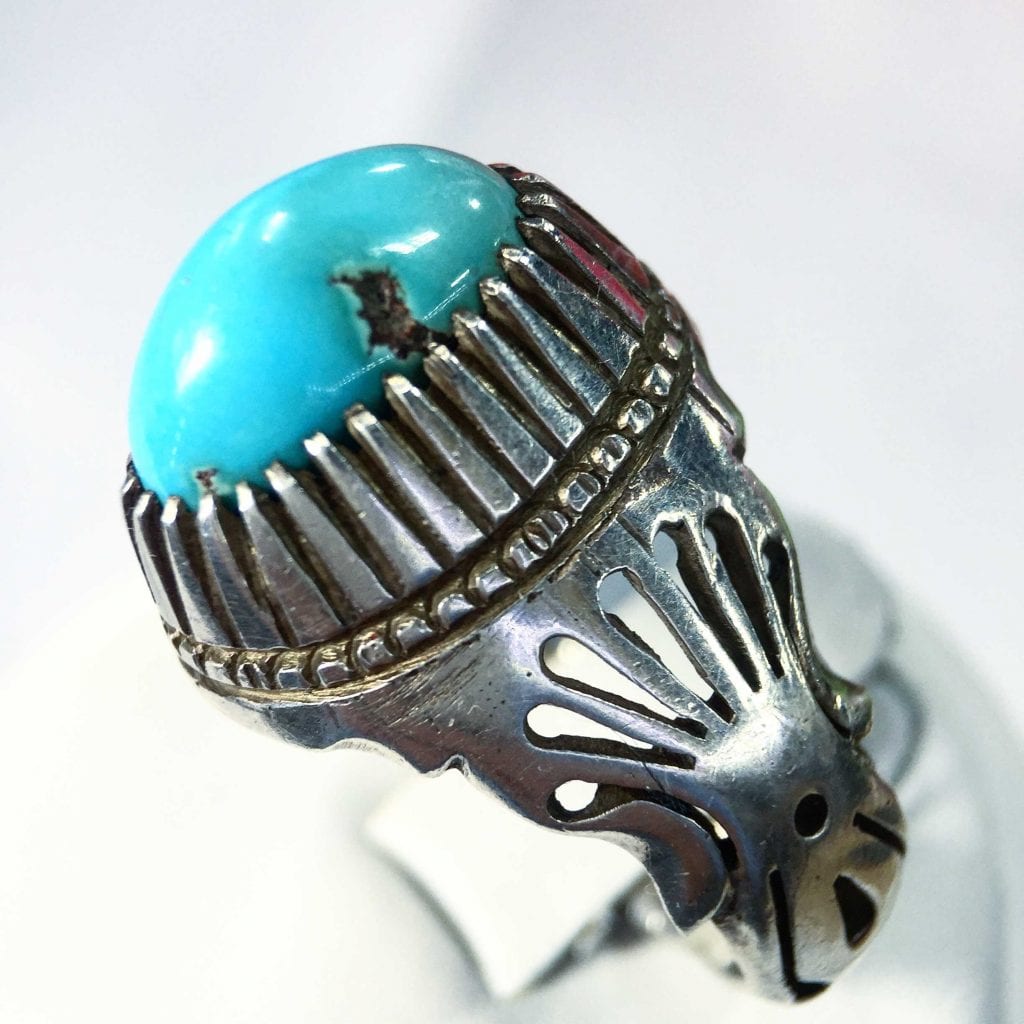 Another stone that ahadith recommend to wear is Feyrooz (Turqoise). A hadith from Imam Ridha states,

It is narrated that Imam Musa Al-Kadhim wore a Feyrooz ring with the engraving Allah, Master of the Kingdom. (12). Famously found in Nishapur, Iran, the best kind of turquoise is those whose colour is sky-blue (13). Imam Ali is narrated to have said that “it protects a believer from misdeeds”. (14) It is also said to protect its wearer against the evil/jealous eye (hasad). 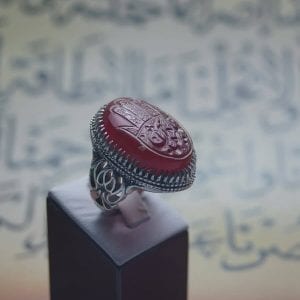 Other stones recommended by Imam Ali Al-Ridha are Yakoot (Ruby), which he said stops worries, Zaberjad (Jade), of which he said the same, and Zamarrud (Emerald), which he said turns the poor into the rich. (15) The Holy Quran refers to Yaqut when it says:

“As though (in Good looks) they are like Rubies and Coral.”

According to some experts, the benefits of ruby include the prevention of blood loss, the helping of curing blood disease and heart disease, the protection of its wearer from nightmares, and the bringing of light (noor) to the eyes of those who gaze on it. (16)

Imam Ali has said that Zamarrud eradicates difficulties by the order of Allah. (17)

Hadid is another stone recommended in times of difficulty. When someone came to Imam Jafar Al-Sadiq fearing for his life, Imam Sadiq told him to wear have a ring of Hadid Seeni made, with ‘I seek the refuge of the Almightiness of Allah. I seek the shelter of the words of Allah. I seek the shelter of the Prophet of Allah’ engraved on one side, ‘I have brought faith on Allah and his Books. I myself rely on Allah and his Prophets’ engraved at the back, and ‘I stand witness with all submission to there being no Creator except Allah’ engraved on all four corners. (18)

Muslims differ on the extent to which gemstones can aid or have an effect on those wearing them. Some limit the ring that is recommended to be worn to a silver ring, based on prior mentioned hadith, while others limit it to an Aqeeq/agate ring, since the Holy Prophet is narrated to have worn it, and see no benefit in other gemstones.

Regardless, all Muslims believe in the benefit and divine reward of wearing a ring in general, and, based on the Muslims of history narrated to have worn if not praised numerous rings and gemstones, it has been and will continue to be a beautiful and important part of the Islamic identity.