Sometimes you hear a story that serves to counteract the relentless negativity towards religions that washes around us on a daily basis.  More recently it is Muslims who have bore the brunt of this, with almost a third of schoolchildren believing that Muslims are “taking over our country”, and the fact that British Muslims face the worst job discrimination of any minority group.

I feel it is important to pass on to others a very special family story in an attempt to straighten out what can be a highly skewed view of humanity.

My mother’s first cousin, always known to me as Auntie Lilly, turned 105 in March.  She received her second birthday card from the Queen – in case you’re not aware, you get one at a hundred, then another at 105 and one every year after that if you request it!   Lilly came here as a Jewish refugee from Germany in March 1939, working first as a domestic servant and later marrying and having a daughter.  She lived in the same three-bedroomed, semi-detached house in Willesden Green, in north-west London, for the past fifty-four years.  For the past twenty-five, since her husband Joe died, she has managed on her own.

When she was ninety-nine and a half she fell and broke her hip.  Everyone thought she would have to make a dramatic change in her lifestyle; she would certainly need to go into an old-age home.  Auntie Lilly, however, had other ideas.  After quite a considerable period of hospitalisation and rehabilitation, she returned to her own house and was once again climbing the stairs to her bedroom.

Her only child, Regina, married to an American, lives three thousand miles away but they speak twice a day on the phone and on Facetime and she visits her mother several times a year, often bringing other family members with her.  For the past eleven years Regina has been given huge support and relief from anxiety about living far away from her mother from another source.

When Lilly was still a sprightly ninety-four and pottering one day in her front garden, she got chatting to the new neighbours who had just moved in next door. They were an extended Pakistani family of fourteen. The parents, Mohammed and Shamin Islam, had first come to England in 1977.   Having lived for a while in Middlesbrough, they moved in 2002 to Kilburn and then on to Willesden Green.  They were highly observant Muslims who prayed five times a day.  The women wore the hijab and, in keeping with their traditions, could not be alone with men who were not family members.  An essential part of their religious belief and moral code was an immense respect for elderly people, no matter what their religion.  The youngest member of the Islam family, a little girl of about two, took to Lilly immediately and began to call her “grandma”. From that day onwards they became fast friends and adopted her as their own.

Mohammed would pop in frequently to do odd jobs in the house and garden or just to chat over a cup of tea.  Shamin and her daughters would bring food they had cooked and check up on her on a daily basis.  They would keep in regular touch with Regina to reassure her that Lilly was being well looked after.  At Lilly’s 100th birthday party, held in a restaurant, her Pakistani neighbours were honoured guests and had pride of place at the top table.

Until just before her 105th birthday Lilly was still independent and managing to cook and look after herself, even if she did complain of being a little slower than previously.  When I visited her I would take my grandchildren and she would watch with delight as they played in her garden.  She always insisted on giving each of them a five pound note when they left, saying that she couldn’t get out to buy presents.  Her daily routine was a regular one and she was always cheerful, positive and interested in the lives of her visitors.

Recently, she began to find life more difficult.  Her wonderful neighbours started to come every morning to help her to wash and dress herself and then again in the evening to help her to get to bed.  When she became too weak to climb the stairs, two of the girls managed to move her double bed downstairs to the front room, settled her in it and then called Regina on Facetime to show her.

On her 105th birthday three members of the family, Imresh, a young married woman, her two-year-old daughter, Zayna, and her sister Taneem, came in with a very special birthday card.  On the front was a large photo of Lilly and around it were photos of various members of their family.  Inside was written: To Grandma.  We love you.  I watched as the little girl presented it to her with a huge hug and a kiss. 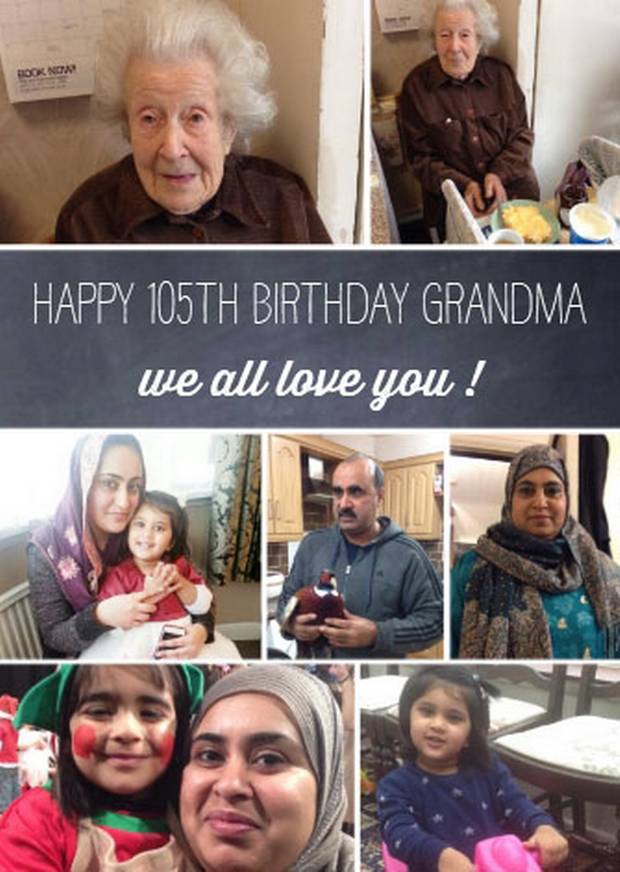 When Lilly became more poorly, Regina stayed to look after her, but it was a job for more than one person. So Shamin and her daughters took it in turns to help her twice daily, as they had done before.  Seeing the love, care and respect they had for her removed all notions of a barrier between age groups, religions or races.  They are simply the best of good neighbours who have become close and immensely valued friends.   Regina knows that she owes them a debt she will never be able to repay, and that they will remain in touch for the rest of their lives.

Auntie Lilly died on 26 March 2015.  She passed away peacefully in her own home with her daughter beside her.  In accordance with Jewish tradition she was buried the next day, in the Jewish burial ground at Bushey in Hertfordshire.  Her son-in-law and two grandsons arrived just in time for the funeral, having flown in from America.  Lilly’s regular Pakistani minicab driver, Iqbal, picked them up from the airport, took them to Lilly’s house and then to the burial ground.  He attended the funeral and refused to take any money for his fare that day.

At the service were Mohammed and Shamin, he dressed in white tunic and trousers and she in her traditional shalwaar kameez and scarf.  Lilly’s Iraqi neighbours also attended, wanting to mark their special relationship too.  Traditionally, when the coffin has been lowered into the ground it is customary for the men to take turns in shovelling earth onto it.  Mohammed, Iqbal and the Iraqi friend all did so, continuing to give to Lilly in death the same love, honour and respect they had given her in life.

In a world in which we hear much about conflict, differences and divisions, this story of a truly loving relationship between an elderly Jewish lady and her Muslim neighbours has succeeded in lifting my spirits and renewing my faith in the essential goodness and kindness of human beings.

The Importance of Mutual Respect in Marriage: An Islamic Perspective