It was her anniversary and the memories had come flooding back: “I just feel so alone”.

It was her anniversary and the memories had come flooding back: “I just feel so alone”.

(This is the second part of Dr Khaki’s experience in a Rohingya refugee camp. You can read part one here)

Our company for the next mornings trip to Jamtoli camp was a jovial bunch, who were happy to share their experiences. Talk turned to the refugees and I asked why the women had so many children – sometimes 5 or 6 – when their future provisions seemed so uncertain. One doctor told me he asked a female patient the same question and she told him: “It’s because we’ve seen our children be killed, and we worry now that they won’t survive”. Another told him that as a single mother in the camps felt very vulnerable and she hoped they would be a “source of protection”.

The drive to the camps proved to be a long and arduous journey, with numerous NGOs treading the same path; dust kicking up as vehicles vied to overtake rickshaws who were vying to overtake other rickshaws, who were vying for customers. Forty-five minutes into the journey, the farming landscape was significantly changing, the rice fields and greenery had made way for makeshift shelters visible either side of the road. As our journey progressed, it became evident that all farming had been abandoned, trees had been uprooted and land had been cleared to give way to what appeared to be a sprawling, quite overwhelming Rohingya “city”.

A wave of activity engulfed our vehicle and the road as the scale of the situation became evident; children were running free or huddled in groups; endless women were queuing for medical attention; young males were leaving long lines with rice parcels atop their head; men and women were waiting for their turn at the latrine; adults and children, nude, were showering in the open. The car bumbled along more carefully with the burst of the humanity that had appeared, and I noticed that the road names had been replaced with NGO’s signposting their services – to date 147 unofficial NGOs are providing the only support the Rohingya have received. The scale of the camp has necessitated organisation and each new settlement area receives an alphabetical “postcode”. At the rate the Rohingya are being forced out of Myanmar, they will run out of letters soon. 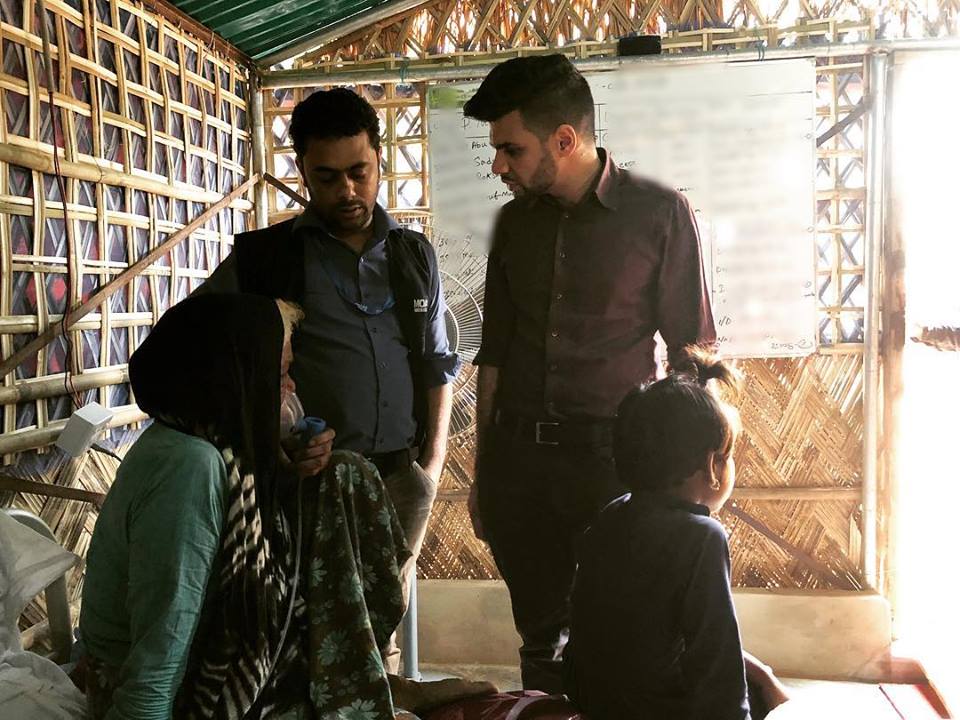 The morning’s clinic began with some observation, but the numbers attending were escalating by the minute. A cursory glance at attendance figures for the last few days revealed an average attendance of 209 patients. The doctors were having difficulty coping; observation time was over. We took the third doctor’s room and a bundle of 15 sheets was placed down, whilst patients now huddled their seats around our doorless bamboo room. A wry smile formed on my face – it was becoming a Monday morning clinic at the surgery, just without any staff…or tea…or doors. After a run of 7 patients, the clinic coordinator had had enough of translating and brought Jahangir, a lovely, well-spoken boy to translate. I enquired between patients as to where he was from and why he was volunteering. He told me what else could he do, he is actually a Rohingya refugee. A refugee? How was his English so good? “My father worked very hard in Myanmar, he had four shops, and he wanted us to become educated and learn and always encouraged us to study. All that has changed now though…” His voice trembles, he isn’t able to meet my eye and I don’t have the heart to ask him to go on. I tell him that he’s one of the best translators I’ve worked with – he is – and that I appreciate his help as part of the medical team. He beams at me and double’s back to the waiting room, grabbing the other doctor’s patients notes and re-directing them all to me; it was worth it.

We continued to see patients, and each story was as heartbreaking as the last. No presentation was a simple problem or a long-standing issue; every problem was a result of past trauma; physical and psychological – the young man with the broken hand running for safety; the lady whose husband was killed and was struggling to manage with her children. Then came a smiling sixty-year-old lady called Noora – the patient who will never leave me – asking for multivitamins. She came in with a wide smile, told me she was eating well, felt well but just knew that she needed multivitamins. I smiled as if North London had come to Bangladesh. She smiled again and I asked her about the multivitamins. She said I was cheeky for asking her why she needed them, and I asked her why she was so desperate for them. She paused, looked at me intently and said: “Well actually, I’ve hardly eaten since I’ve been here”. Why? She was no longer smiling as her bottom lip betrayed her and she began; her husband and son had been killed in front of her eyes – she had made it out alive but she was missing them sorely. It was her anniversary and the memories had come flooding back: “I just feel so alone”. I held her trembling hands and her tears began to flow as I fought back my own. Through sobs, she told me I reminded her of her son, that he too was cheeky. I told her she was the same age as my mother and she teased me like my mother; maybe I could be her distant son. She smiled and said yes, she’d like that. We stared at each other for a few seconds before she bristled up, wiped her tears, fixed that beaming smile and said: “As you’re my son now, how about those multivitamins?”

We broke for prayer and I joined the Rohingya menfolk in the prayer congregation; barefoot, side by side, bowing in humility to the same God. It was a humbling spiritual experience, and I took time for an extra prostration to thank God for his blessings and for an extra prayer for the Rohingya, my face wet with tears. Driving home that evening, we saw the construction of more camps; there appears no let up to the influx. Dinner that evening was spent finalising the next few days training seminars. Long after my wife fell asleep in exhaustion, I lay awake; my thoughts dominated by Noora, just 55 minutes away, her life and love snatched away in a moment.

The next few days were spent at a training facility, training doctors and healthcare staff from different NGOs across a plethora of areas, including triage and emergency treatment, history, and examination skills, and resilience and self-care. We discussed changes to practice, amendments to clinic infrastructure, how to train allied staff and how we would follow up on these sessions. The doctors shared their stories and experiences, discussed cases and partook in role plays and it was humbling to receive such positive feedback on the final day from the unsung heroes who serve the Rohingya population day in and day out. Reflecting this back to the doctors, one told me it was his honour to serve, recalling his most cherished memory – the moment a grateful mother asked him to name her newborn child: he chose “Fatima”.

As our last day of teaching came to a close, we allowed ourselves a walk along the beach to see the sunset. It had been a grueling schedule, but we could take some rest. But, for the Rohingya, it is an ongoing struggle. In a moment of quiet introspection, my mind wandered back to the mirth and laughter of those children we met. I scrolled through my photos and my eyes fell upon a poster on the school wall that had previously escaped my attention but now seems more poignant than ever. On the poster, the lyrics to a gospel song have been hand drawn, like a Rohingya mantra, suggesting hope for the future: “We shall overcome; we shall overcome; we shall overcome someday; oh deep in my heart, I do believe, we shall overcome someday”. Perhaps it’s my time spent with this most resilient of a population, perhaps it’s the beaming smiles and endless enthusiasm of the children, but I can’t help thinking that perhaps this is more than a song lyric, perhaps it’s a prophecy. I hope and pray it is, even if above, the storm clouds are gathering.

Dr Mohammed Abbas Khaki
Dr Mohammaed Abbas Khaki is an innovator, motivational speaker, media personality and award-winning doctor who volunteers around the world doing medical relief work. He has started to document his experiences of his page: www.instagram.com/doctormakk