The Rohingya Muslims: Understanding the plight of statelessness

According to the United Nations, the Rohingya Muslims of Burma are “the worlds most persecuted minority.[1]”

Let that sink in.

Consider the recent oppression against the Yazidi community in Iraq.[2] Or the 1,900 Shi’a killed in Pakistan in just three years.[3] Or the elimination of Hazara Muslims from Afghanistan.[4] For the United Nations to put, on record the treatment of the Rohingya in a world decimated by persecution in such terms, speaks volumes.

Thanks to international agencies and social media, documentation and awareness of the suppression undergone by the Rohingya has increased. However, much of the underlying reason for their victimisation has gone undiscussed; that is the plight of ‘statelessness’, the fact of having no nationality recognised by any state in the world. 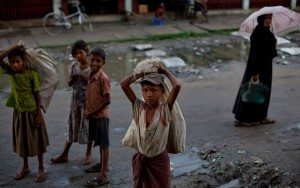 Imagine living in a country in which you do not belong nor are you legally residing. You do not have citizenship, rights over your own possessions, have no formal protection from the government, no access to an embassy, no right to entitlements or welfare and cannot vote to change your situation. You are excluded by society altogether. Now imagine this situation, but that you are in fact excluded by every country in this way. You are cast adrift by all 196 nations of the world. This is statelessness. To belong nowhere. And there are more than 15 million people estimated to be stateless in the world today.[5]

It is because the Rohingya Muslims are stateless and devoid of being afforded their Human Rights that, they are being so exploited and massacred with impunity. Despite this global mire of statelessness, many have not been introduced to its dilemma and do not understand its implications nor how we can assist in securing the most elementary of Human Rights for the Rohingya – a legal place to reside in this world.

This blog series is dedicated to understanding the plight of statelessness in International Law. It will focus on the following questions

1) What is the condition of the Rohingya Muslims?: Their history and cultural entity; the conflict with the Rakhine Bhuddist Monks

2) What is Statelessness?: Its history; how do people becomess stateless; who are stateless and how does it affect communities

3) Why does Statelessness persist?: How do countries benefit from maintaining statelessness; what has the International Community done to avoid and assist stateless people; what is the role of organisations like the UNHCR?

4) What does Islam say about Statelessness?: Examples of citizenship from the Prophet Muhammad (s); importance of serving the downtrodden and needy; how does Islam envision a State, nationality law and governing a global popultation?

5) How do we eliminate future Statelessness?: Envisioning a more approriate world for all peoples; suggestions toward reform of International Law; solutions for statelessness; how to practically assist the Rohingya and be involved in the ending of statelessness

This bi-weekly series will, God-willing, focus on statelessness as a global phenomenon, International Law and its reformation toward a world that does not exclude any group due to their ethnicity or faith. We aim to achieve a comprehensive introduction to the plight of Statelessness, providing solutions for Statelessness that can be adopted and partaken in and to commence a movement to assist in the patriation of the Rohingya Muslims as full members of the Burmese society, no longer living without their basic Human Rights.

In part 2 we will present a brief history of the Rohingya Muslims and the genocide committed against them by the Rakhine Bhuddist Monks.

You can find Part two of this blog series here: The history of the Rohingya Muslims and the development of their plight