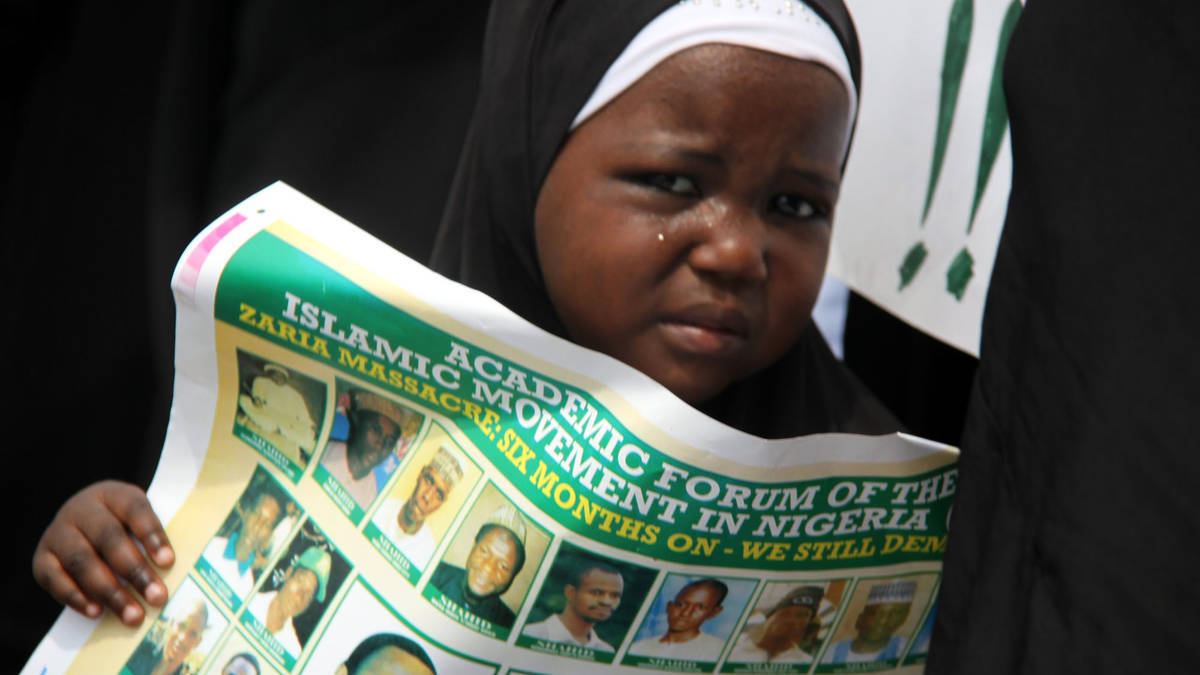 Genocide.
According to the Oxford Dictionary, the term genocide is defined as: “The deliberate killing of a large group of people, especially those of a particular nation or ethnic group.” This is an accurate depiction of the current state of affairs in Nigeria today, the most populous country in the continent of Africa. Expectantly, this widespread genocide is targeted towards a minuscule minority, the Shia.
I cannot express how distraught I felt after being made aware that on the 10th of Muharram, Shia Muslims across Nigeria were yet again, like every year, slaughtered and attacked by terrorists. The Islamic Movement in Nigeria (IMN) has constantly been targeted by the Nigerian Army, and other terrorist organizations – despite being a peaceful group that wish to practice Islam freely. Expectantly, the West shows no concern over the transparent violation of basic human rights; the right to freely practice your religion, by the Nigerian government.
On 12th October 2016, our Nigerian brethren were mercilessly killed on the day of Ashura – one of the most important days of the Islamic Calendar – the day mourners around the world remember the tragedy that befell on the family of Prophet Muhammad (pbuh). Hundreds of Shia Muslims took part in the annual Ashura procession, and some that participated never returned, for Mosques were set on fire, tens of believers were killed, approximately 300 individuals (including children) were violently arrested and over 100 were brutally injured. These are not just numbers; these are innocent lives stolen by merciless individuals who do not fear God. Although their tragedies aren’t “worthy” of broadcasting, courtesy of the mainstream medias Eurocentric standards of priority, their struggles remain of paramount to us.  Through numerous social media platform, our brothers and sisters residing in Nigeria have been calling on anyone with a conscience to help. So why are we not answering their call? The Qur’an explicitly tells believers:

“O you who have believed, be persistently standing firm in justice” (4:135)

We have no excuse to be silent.

Furthermore, it is explicitly clear that the media in the West has an agenda to not cover these incidents effectively. Western governments, institutions and international bodies constantly discuss human rights, they almost immediately release statements of condemnations when terrorist attacks take place in the West – but when it comes to the Nigerian regime that continues to commit massacres without end, the western governments stay silent. Where were the world leaders that travelled to Paris after the Charlie Hebdo incident? Where was the United Nations? Where were the statements from NGOs and international bodies? The silence is truly deafening. But more so, the silence from Muslim leaders and communities across the world is heart breaking. Shia Muslims are being left isolated when they are butchered. We forget that regardless of sects and ideologies, we all believe in the same God, we pray in the same direction and we all follow the same Prophet (pbuh).

We should be defending and protecting our fellow brethren.

This is not the first time our brothers and sisters in Nigeria have been attacked. At the annual Al-Quds procession in 2014, over 40 lives were taken, the sons of Sheikh Zakzaky were martyred, and followers of the IMN were abused and arrested. Equally, in December 2015, the leader of the IMN, Sheikh Ibraheem Zakzaky and his wife, were arbitrarily arrested by the army. The incident that took place in Zaria, was arguably one of the bleakest days in history – members of the army surrounded the residence of Sheikh Zakzaky, shots were openly fired by the military, women and children were killed instantly, but I don’t remember hearing echoes of condemnations. I don’t recall worldwide protests being held. I don’t remember news anchors discussing any aspect of the incident.

We should all collectively condemn this silence.

Hundreds of unarmed members of the movement were attacked, murdered and then later buried in mass graves. The military forced the women to remove their hijabs before leaving their homes, and children were killed in the presence of their loved ones. 10 months on, justice has still not been served, the government has still not been held accountable for the murder of hundreds, and Sheikh Ibrahim Zakzaky still remains in solitary confinement. How morally bankrupt of a global society are we to go berserk for the right of a few ill-intentioned bigots to draw a mockery of praiseworthy spiritual figures, yet not facilitate for a single procession against the brutal massacre of Nigerian Shias? Is the right to life of more importance or the right to mock? Can the West really be considered to being “progressive” when the aforementioned question is left unanswered?
So you might question why are Shia Muslims being targeted by the regime in Nigeria? Well the answer is quite simple, there is a distinguished parallel between the Saudi regime and the Nigerian regime. Both countries systematically discriminate against minorities (in this case being the Shia). Shia voices are constantly repressed, and innocent men, women and children are systematically incarcerated. Sheikh Nimr Baqir Al-Nimr, a renowned human rights defender was beheaded by the Saudi regime in the first week of 2016 after suffering in solitary confinement for over four years. Similarly, Sheikh Zakzaky was forced into solitary confinement in the last days of 2015 – the link is evident.
Our honourable scholars and their followers are being targeted by regimes influenced by Zionists. The Nigerian regime has a close relationship with Israel, likewise the Saudi regime has grown closer to the Israeli regime than ever before and the blood of innocent continues to spill – in Yemen, Syria, Iraq, Palestine, Nigeria, Pakistan and in many other countries around the globe. These atrocities being committed against believers are being perpetrated by those that are enemies of Islam – media outlets such as BBC, Fox and CNN will not draw attention to these massacres and attacks against Muslims because it goes against the narrative they must follow and adhere to.
There are a countless lessons we can learn from the events transpiring in the world today; we should directly demand our governments and leaders to provide adequate justification for their silence when our brethren are killed, awareness should be raised on the social media platform until justice is restored, vigils and demonstrations should be organised not only to show solidarity with our brethren but to exemplify that we will not be silent witnesses to such atrocities, and most importantly, knowing that the religion of Islam is under attack now more than ever, it is therefore incumbent upon us to stand up and protect ambassadors of Islam from being maligned, persecuted and slaughtered. It was our beloved Prophet (pbuh) that taught his community about protecting fellow brethren, it was Imam Hussain (as) that sacrificed his family to protect Islam – nothing should stop us. We are exceptionally fortunate, despite any difficulties we face, we are able to practice our religion freely, we are not being killed, we have the freedom to speak up for people whose rights are being violated – and this is something we should try to prioritise as much as we can, for we will be held accountable by the Almighty on the day of reckoning.
For more information, watch this video for an analysis of what is happening in Nigeria
[youtube id=”rO8sDi9C0V8″]

Afreen Rizvi
Afreen Rizvi is currently pursuing a degree in Law and Social Justice at a UK university. In the last 7 years, she has actively participated in numerous political campaigns and initiatives, specifically concentrating on the human rights violations of minorities in Saudi Arabia, Nigeria, and Bahrain. Presently, she is working on projects focused on Islamic activism that will equip Muslim communities with the knowledge and tools needed to build momentum towards lasting change.