Why as a 2nd generation immigrant I took Brexit personally

“This is not the Britain I was born and brought up in.”

“This is not the Britain I was born and brought up in.”

For those who know me personally, they know that my political knowledge is probably as comprehensive as that of a six year old. Simply and quite selfishly put, I didn’t really care what happened in the world. As my ingenious cousins would continually discuss free trade, red tape and the single market, all I wanted to do when I got home from work was to change the blaring poignant images running on Sky News to Richard Hammond racing the Bugatti Veyron with the Euro Fighter Typhoon on Top Gear re-runs.

I wanted to turn a blind eye to the pending elections last year, what’s the big deal anyway, I thought to myself. And this mind-set continued, no matter how much Brexit was thrown in my face; radio, TV, social media, colleagues at work etc. I kept running from it because it was excessive and stressful and unnecessary in my already hectic life. I kept turning a blind eye from it till I saw Jo Cox’s face pasted over social media on 16th of June 2016. I kept turning a blind eye till I realised that she was killed in a political attack due to her support for the Remain campaign. I kept turning a blind eye till it dawned on me that her two young children would now grow up without a mother. Albeit a week before the election, I woke up to the reality that was slowly yet surely coming to fruition.

I wholeheartedly agree that there were many robust and thorough arguments to exit the EU and people had every right to make their own informed decision of what camp they wanted to support. However, were our hearts and eyes so blind to the hate campaign that formed the core foundations of the #voteleave campaign headlined by racists such as Farage, Gove and Johnson? The forefront of the entire campaign was based on vile, racial and misogynistic slurs. What was even more absurd was the Nazi style propaganda Farage displayed with his infamous poster of a swarm of Syrian refugees walking towards shelter – an eerie facsimile of Hitler’s poster of the Jewish refugees. 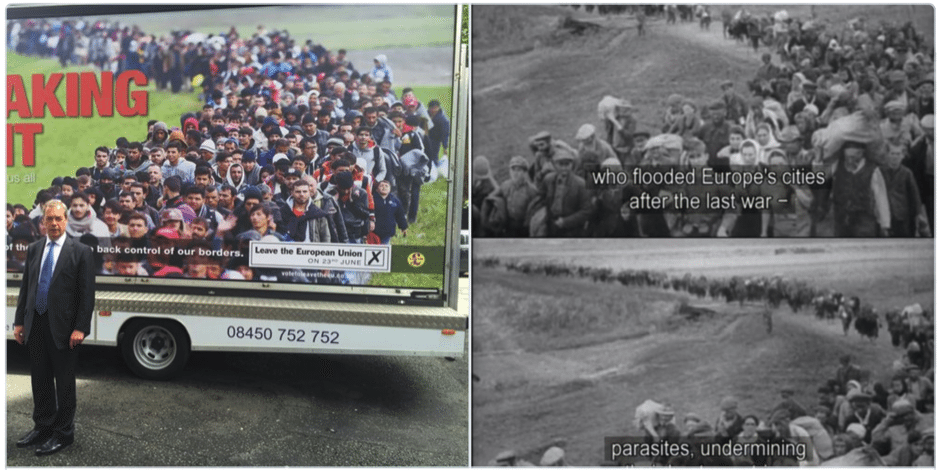 Yet that’s still not why I took Brexit personally, what was personal for me was that members of my own community were supporting the likes of Farage and Johnson. People I had grown up alongside were supporting this “Britain First” campaign where immigrants were viewed to be the root of all evil, affecting the so-called “greatness” of Britain; taking our jobs, raising the crime rate, causing long GP wait times (ridiculous, I know) etc. Absolute absurd allegations without any substantial backing – can someone please show me any stats which prove that the reason we have long waiting hours at GP’s is because of these “Europeans” and/or “Syrians” coming in rather than our ever-increasing own desi population on indefinite stay visas? Or any stats to show that we are less likely to get a good job because all these immigrants are taking them…have you ever considered that perhaps your son Mohammad’s high school diploma from West Middlesex College is not as competent as Andrej’s Masters’ degree from the Technical University of Slovakia?

My grandparents were immigrants in this country, who came to England in the 1960s from Pakistan & India – making me a second generation immigrant. England gave my grandparents a chance to create a better future for themselves and their children, where education was not a rarity, rather a norm, where a career wasn’t an exception rather, an achievable stepping stone for the chance of a better life. It gave our family (and a lot of other families like ours) the most beautiful and blessed of opportunities to reach our potential that many others perhaps never got back home.

Thus, I was shocked at the arrogance of some of these same individuals in our community (and unfortunately, in my family too) to support Farage’s view, chanting lines such as “Make Britain Great” and/or “Get these Eastern Europeans Out,” a continuous series of never-ending vile spiel. I couldn’t for the life of me comprehend how being immigrants OURSELVES, we had the right to stop others getting the same opportunities our grandparents were given? Why? Because we came here first? Where did all this arrogance and self-importance stem from? A clear warning in the Quran that holds steadfast:

“Oh Mankind! Surely Allah has removed the pride and conceit that existed within you during the days of Ignorance in relation to your fore-fathers. Surely all of you are from (Prophet) Adam and Adam was (created) from mud. Surely the best servant of Allah is that servant who has consciousness of Him.”

Where has this taqwa (consciousness) of Allah (swt) gone? Ironically, there is this misconception as a generation that we have progressed from our fore father’s times of jahiliyyah (ignorance) yet when push comes to shove, our old-school opinions remain the same. Every time we sneer and disparage others why do we forget the creator who is ultimately watching us. Imam Ja’far al‑Sadiq (a.s) reported from the Prophet (saw) who said: “Whoso­ever possesses in his heart ‘asabiyyah (prejudice in any of its forms such as tribalism, racism, nationalism) even to the extent of a mustard seed, God will raise him on the Day of Resurrection with the (pagan) Bedouins of the jahiliyyah (the pre‑Islamic era).” [Al-Kulayni]

So why do we not stop to reflect?

It is more crucial now more than ever before to put aside these ridiculous cultural and racist dogmas and think of the impact our actions can have on the wider community. What example are you setting for your children and your community when you stand in allegiance to discrimination against immigrants and refugees in this country? What is making your actions any different to what Trump has just tried to do with the refugee ban that almost took flight in the USA?

When Thomas Mair butchered Jo Cox to death on the 16th of June 2016, he shouted “Britain First. This is for Britain, Britain will always come first.” Mairs’ actions clearly represented the disease and filth that formed the crux of the #VoteLeave campaign for many.

This is not the Britain I was born and brought up in.

What truly makes the Britain I grew up in “Great” is in her generosity and impartiality in welcoming so many families with the chance of a better life, offering bounteous opportunities to all its citizens regardless of race, religion or culture, be it paving the way for London to elect its first Muslim Mayor or the ability to openly practice one’s faith in peace and harmony without the fear of being persecuted.

It was this Britain that voted for the #Remain campaign to continue to allow the country to flourish with the diversity of its inhabitants, one of the signs of Allah (swt)… “is the creation of the heavens and the earth and the diversity of your tongues and colours.” [30:22]

Thus, albeit us all trying to find a balance, one should be conscious not to blur the lines between what’s logical to what’s humane.