Are President Emmanuel Macron’s new laws a fight against radicalisation or Islam in France?

Macron stated that “Islam is a religion that is in crisis all over the world today, we are not just seeing this in our country.” But these measures have been criticised by other leaders as creating further divisions and could increase the prevalent Islamophobia which already exists in France.

French President Emmanuel Macron has vowed to introduce tougher laws to fight against ‘Islamist separatism’ in order to defend France’s secular values. This is a country with over 6 million Muslims currently reside in France, making it the largest population in Western Europe.

Macron stated that a minority of France’s Muslims were in danger of forming a “counter-society”. According to the Secular Society, there are 3 defining key features which define secularism:

France’s government is by law already separated from religious organisations and institutions, which is referred to as laïcité. The legislation, which Macron intends to propose to parliament in December 2020, strengthens this existing law. It will include restrictions on Muslim students being homeschooled, stricter monitoring of sports, cultural, community organisatons, a ban on imams being sent to France from other countries, and the funding of mosques being heavily scrutinised. The new measures will also include a ban on the wearing of religious symbols for transport employees.

Macron also stated that “Islam is a religion that is in crisis all over the world today, we are not just seeing this in our country.” But these measures have been criticised by other leaders as creating further divisions and could increase the prevalent Islamophobia which already exists in France.

Macron also believes it is necessary to “liberate Islam in France from foreign influences,” naming countries such as Turkey.

The Turkish foreign ministry initially responded by saying: “To think that they can discipline immigrant societies by introducing concepts such as ‘European Islam’ and ‘French Islam’ under the pretext of ‘enlightening’ the religion of Islam means acting in the opposite direction of humanitarian and legal considerations.”

Turkish President Recep Tayyip Erdogan on Tuesday also said, “Macron’s statement that ‘Islam is in a crisis’ is an open provocation beyond disrespect…Who are you to talk about the structuring of Islam?” he asked, accusing Macron of “impertinence”.

Critics have also accused Macron of using Islamophobic language in a tactical move to appeal to right-wing voters in the upcoming elections. Macron’s party did not win any major victories in local polls in February 2020, and during this summer, President Macron reshuffled his cabinet that included ministers from right-wing parties.

The repression of Muslims has been a threat, now it is a promise. In a one hour speech #Macron burried #laïcité, emboldened the far right, anti-Muslim leftists and threatened the lives of Muslim students by calling for drastic limits on home schooling despite a global pandemic.

Macron also stated the problem of radicalisation was partly a result of the “ghettoisation” of French cities and towns where “we constructed our own separatism.”  There have been many ethnic minority Muslim men from these so-called ‘ghetto’ cities who have taken part in the yellow vest movement and experienced police brutality.  An investigation by the French publication Street Press reported that 47 unarmed men died between 2007 and 2017.  It was disproportionately black, Arab and Muslims who died or experienced violence.

The rights of Muslim women in France have particularly diminished. Women are not even allowed to have personal autonomy to cover their own bodies when swimming due to burkini bans. France is also enforcing mandatory facemasks to protect people against coronavirus but it is still committed to a burka ban – meaning women are simultaneously forced to cover and yet are not allowed to cover.

Macron has also never condemned satirical and offensive images of Prophet Mohammed (swt.) Even halal business owners who refuse to sell non-basic essentials such as wine and pork have been forced to closed down.

If the foundations of secularism means freedom to practise one’s faith and no fear of losing equality, then why are French Muslims continually facing obstacles to lead their lives without reprimand? 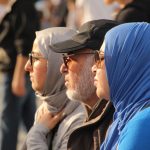