The eviction and violence, experts say, has a history behind it and was an outcome of relentless xenophobia rooted in ethnic nationalism and Islamophobia.

Slain Moinul Haque’s family is now homeless. They have been pushed to a temporary shelter on the other bank of the river (Photo Credit: Kazi Neel)

NEW DELHI — An eviction drive on 20 September 2021 by authorities in a village in Assam, a state in eastern India, left at least 800 Muslim families homeless. The civil administration, aided by police and the paramilitary, dismantled hundreds of homes besides demolishing three mosques – claiming that the land of around 600 hectares was being illegally occupied by the people.

Three days later on the 23rd of September when the authorities again came to demolish more homes in Dholpur village, the people came out and protested. The police swung into action and used strong force – leaving at least two Muslims dead and around 20 injured.

A video of the violence that went viral on social media shows a lonely man carrying a stick, approaching a pack of cops who then aim assault rifles and mercilessly shoot him in the chest. As he goes down, the cops beat him with sticks. A cameraman also jumps in and brazenly stomps on the lifeless body of 27-year-old Moinul Haque. The other slain has been identified as 12-year-old Sheikh Farid. 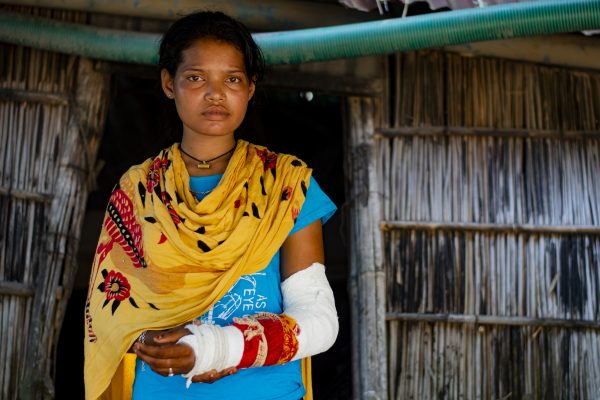 The video of the gory violence sparked massive outrage in India and abroad, triggering a wave of protests by Muslims and rights groups across cities and towns. They demanded legal action against the cops and officials responsible for the carnage, even as the government promised an independent probe and arrested the cameraman who has been identified as Bijoy Baniya, a photographer who was hired by the government.

Sarma, the Chief Minister, reportedly condemned the act of the cameraman and expressed regret over it. He also ordered a judicial probe into the violence but activists say this is “not enough”.

According to local reports, when Haque saw the police hitting a woman he got angry and picked a stick to chase them away. The police retaliated with a rain of bullets.
On Twitter, activists hailed him a hero for defending his people and home.

“What drives a person with a stick to run into a hail of fire? His humanity” wrote Adil Hossain, a researcher and journalist.

On Tuesday a group of Muslim activists held a protest demonstration in the Indian capital of New Delhi, demanding justice for those killed by police and also rehabilitation of the evicted.

Ashraful Hussain, a lawmaker in Assam from an opposition party that finds support among Muslims, was the first to share the video of police violence on Twitter. He said: “There is a lot of fear and tension. After their homes were demolished these people do not have any alternate arrangements for shelter. They are facing a lot of problems. The families whose sons were killed are in grief.”

‘Terror Force’ of fascist, communal & bigoted Govt. shooting at its own citizens. Also, who is the person with camera? Someone from our ‘Great Media’ orgs?

The appeal of these villagers, against eviction, is pending in the High Court. Couldn’t the Govt wait till court order? pic.twitter.com/XI5N0FSjJd

The eviction and violence, experts say, has a history behind it and was an outcome of relentless xenophobia rooted in ethnic nationalism and Islamophobia.

Hussain also said the government was playing a politics of “otherisation”.

“The violence is an outcome of a long legacy,” he said. “It is a cocktail of xenophobia and Islamophobia. Here Muslims have been made sub-human and they feel alienated.”

A large section of ethnic Assamese consider Muslims as “illegal immigrants” of Bengali origin, despite having lived in the region for decades. They look at violence against Muslims with glee and have launched campaigns for their expulsion.

The xenophobia nurtured over a century is the reason behind the societal approval to recurrent violence and dispossession of Muslims from their homes, said Abdul Kalam Azad, a human rights researcher, who is currently writing his Ph.D. thesis on Assam’s citizenship crisis at VU Amsterdam.

The violence against Muslims in Assam dates back to the 1940s when 12 Muslims were killed for resisting evictions. “Ever since Muslims have been subjected to physical and structural violence throughout the post-colonial history of Assam,” said Kalam.

Both Hussain and Kalam referred to 1983 when thousands of Muslims were massacred — the Nellie massacre — in ethnic violence in the state. “A place called Chaolkhuwa Chapori close to the current eviction site was attacked and an estimated one thousand Muslims were butchered,” Kalam recalled.

The bloodbath took place during an agitation by locals who championed ethnonationalism and campaigned for the disenfranchisement of Muslims of Bengali origin. In 2019, the government concluded a controversial exercise of a citizenship test in the state and published a citizens register called the National Register of Citizens (NRC), which left out nearly two million people, rendering them effectively stateless. Interestingly, despite exaggerated claims by Hindu nationalists, most of the Muslims were able to prove their citizenship.

Back in Dholpur, a photojournalist who visited the evicted families said they are now living under tents of tarpaulin sheets on the bank of the river with no access to drinking water and sanitary toilets. 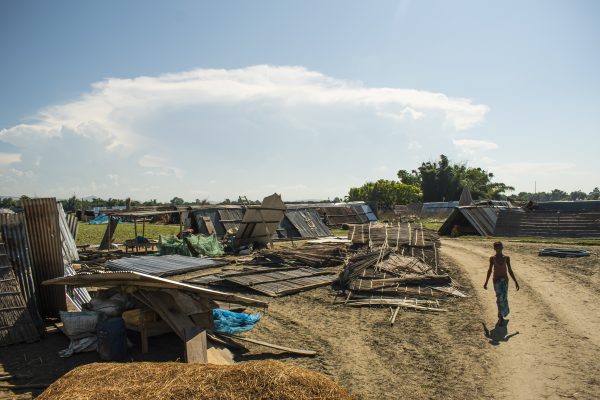 The evicted families have taken shelter under tents by the river bank with no access to drinking water and sanitary toilets (Photo by: Kazi Neel)

A delegation of Muslim groups visited the families and provided them food and relief material. One student organisation said they will take responsibility for the education of children of slain Moinul Haque.

The delegation also met the officials and demanded fair justice and compensation for the families.

It remains to be seen what will be the fate of the millions of Muslims currently living in the state of Assam.