Defeating Pamela Geller and the Islamophobes

Islamophobia is an industry. A really big industry. After all, how can the channelling of people’s hate and frustrations not generate income? Some people watch American Idol auditions hungry to see some poor hopeful get rejected if not humiliated outright. In the same way, certain people also watch the Muslims eager to see cracks in our house. It is a perverse and sadistic desire, nothing less. The captains of the Islamophobia industry know this all too well and hence they keep pumping in Islamphobic rhetoric to their hungry masses.

I believe Islamophobia is a form of racism. While Islam is a set of ideas, it is also a cultural identity embraced by over a billion people. It is one thing to criticise Islam as a set of ideas. That would simply entail disagreeing with the set of ideas which Islam brings. One may think that there is no God, for example. Or perhaps disagree with moral issues such as alcohol consumption which the vast majority of Muslims believe is forbidden. That would be a disagreement and perfectly acceptable. However, there are elements of racism masking themselves as ‘objective’ criticisms of Islam and Muslims. One can easily detect them by statements such as ‘Islam says this’ or ‘Muslims do that’. They are intentional depictions of anything and everything Islamic as vile affronts to the human race. It was this kind of racism which led to the murder of one Mohammad Saleem from Birmingham, UK. Mr Saleem was a peaceful citizen coming home from a mosque when he was attacked and killed. If you see his picture, he bears more than a passing resemblance to Anjem Choudary. The latter is a vile Islamofascist who makes excuses for acts of violence perpetrated in the name of Islam. The Woolwich murderer Michael Adebowale was a close associate of Mr Choudhury.

My point is, when it comes to violent repercussions against Islam, the perpetrator does not stop to ask. Mr Saleem looks very much like Mr Choudary and that was enough for his murderer to act. His murderer would not stop to ask about Mr Saleem’s theological ideas or whether he subscribed to political Islam. By this logic, anyone who fits the ‘Islamic’ image could be a potential victim. In the early days post 9-11, even a Sikh was killed by an ignorant Islamophobe! Not long after the 7/7 attacks in London, a Brazilian man was wrongfully killed. Violent Islamophobia does not care even for one’s religion or lack thereof, it is unbridled racism against anyone with ‘that’ look.

Returning to Pamela Geller and her cohorts, their latest stunt was the ‘Draw Muhammad’ competition in Garland Texas. This event was quite obviously designed as an affront to the Traditional Muslim disapproval for visually depicting Prophet Muhammad. This event would have probably gone totally unnoticed if not for the fact that two gunmen attacked police officers in the parking lot where said event was held. This was the incident that made that event newsworthy. 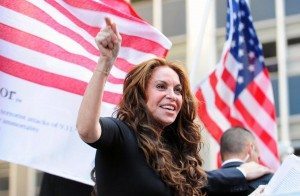 Geller organized the event under the auspices of the ‘American Freedom Defence Initiative’ and styles herself as a defender of freedom of speech and expression. This freedom does not extend across the board but that should not be our concern. Rather our concern should be how we ourselves act towards events such as these. Our reaction determines who the general public will side with.

In my understanding of the Quran vis-à-vis the issue of the visual depiction of the Prophet, there simply is no prohibition. There is even no such prohibition to depict Allah himself although the Quran does say that no vision can encompass Him (6/103). In early Islam, there are numerous depictions of the Prophets by Muslims themselves before a conservative climate set in somewhere along the way and made it prohibited.

Whatever our beliefs are, we must try to understand that there is a rest of the world and these five billion people operate upon a set of values different to our own (and lets not forget our own differences!). What Ms Geller and her cohorts want and need is for Muslims to react against her diatribes like the two gunmen mentioned above. Let us not give them that pleasure.

Instead, what we Muslims need to do is a conscience ‘blanking’ of these folks. Leave them to their own devices. Their activity can only affect us if we give them so permission.