Has the African-American Muslim voice been replaced by an Arab-American one?

[pullquote]This is a race issue and until we as a Muslim community address anti-Blackness, the issue is here to stay.[/pullquote]As Islam takes center stage in America, again, many different political and historical narratives are being disseminated. The “Black Lives Matter” hashtag has gained prominence over the past few months on social media, shared in protest of Black lives being devalued time and time again by the US justice system. A few days ago, a new incarnation was born as the “Muslim Lives Matter” hashtag began to circulate in response to the murder of three Arab-American Muslims. As well intentioned as this may be, it begs the question – do Black Muslim lives matter? To illustrate, I recall in January 2015 when 2,000 Nigerian Muslims were killed, and the response from the Arab Muslim community was at best kept to a murmur.

I also noticed the narrative attached to the “Muslim Lives Matter”. There was an emphasis on the victims being students, community service volunteers, and overall good people. This sort of narrative was void from “Black Lives Matter”, as emphasis was on Black lives in general. But how do we understand the complex relations between the two, especially considering the deaths of Nigerian Muslims? Which comes back to my question, do Black Muslim lives matter? To answer, we must first explore Black Muslim history.

The political entity known as The United States of America has an indigenous Muslim community who happen to be West African Muslims brought to America as slaves. In fact 15-20 percent of slaves caught in the slave trade were Muslims and some among them, Muslim scholars. Omar Ibn Said, from present day Senegal, found himself captured in 1807 and enslaved in North Carolina. While enslaved, he wrote his autobiography in Arabic beginning with Surah Mulk from memory, going on to describe his experiences as a slave in America.

There were even communal African Muslim communities in America. Sea Island off the coast of Georgia is a prime example. Sea Island was a mix of Muslims and non-Muslims where Islamic practices thrived. The Muslim community was able to have autonomy as the environment was not suitable for the white slave owners. Friday Jummah prayer was held and sadaqah in the form of rice cakes were distributed. The second generation of Muslims on Sea Island were truly the first “African-American slaves” who grew up in a mixed American and Islamic environment. 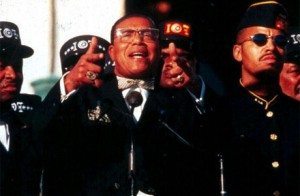 The Nation of Islam was the second wave of Islamic resurgence. Although the Nation of Islam may not be orthodox Islam, it did address Black grievances through Islamic ideals and frameworks. It was formed in 1930, a year after the onset of the Great Depression. During the Depression, The Nation of Islam used Islamic symbols to unify the Black community by focusing on Black economics, education, and systematic oppression under the umbrella of Islam.

In 1965 the US passed new immigration laws which brought a new wave of Arabs to The United States. With this arrival of immigrants also came a different version of Islam to many African Americans. Not only was Islam changing, but what Islam addressed changed also. Islam was no longer a “Black religion” addressing Black problems in Black communities. Islam and Muslims in America turned to a more international stage as Palestinian issues and the 1975 Lebanese Civil War drew more American Muslim attention than Black economics and police brutality. The Black Muslim voice was not only hushed but deemed un-Islamic. When Arab Sunni Islam met the Nation of Islam, Blacks had to choose between orthodoxy and a political voice. Arab Sunni Islam had history, books, and most importantly to some, the correct way to practice Islam. As The Nation of Islam’s membership dwindled and more Black Muslims took to Arab Sunni Islam, the Black Muslim voice also dwindled.

As we are reminded that Muslims lives matter and think of the victims of Chapel Hill, we as humans should be saddened and outraged. But ultimately, why did 2,000 dead Nigerian Muslims not spark the same outrage? Many will defensively proclaim that Nigeria is not in America and therefore has less attention. But neither is Palestine, and its international status did not prevent the massive pro Palestine protest in Washington DC in the summer of 2014, where Black Muslims and Christians, such as myself and Cornel West, spoke out. This is not an, international vs domestic issue. This is a race issue. And until we as a Muslim community address anti-Blackness, the issue is here to stay.