“I’d break down the fences and let the refugees walk across on my back if I could.”

An aid volunteer who visited Greece to work in one of the refugee camps documents her journey into the unknown and her experiences during the stay.

Greece. An island-filled, idyllic holiday getaway spanning 50, 949 square miles. Once considered the cradle of Western civilization, it is no longer the postcard picture-perfect locati

on it was born to be. Do not mistake, it still retains its breath-taking beauty – one drive along a Thessaloniki highway will show you that – but its history is now marred with one of the greatest humanitarian tragedies of our time.

Crippled by an economic crisis, abandoned by its European neighbours in dealing with the largest influx of migration since WWII, it is burdened by stories of hardship at every turn. But as the stars shine the brightest in the darkest of nights, the hearts of the survivors of the Aegean Sea, the locals, and the volunteers are the purest one will find.

But what is it like, practically, in this molten pot of emotion, where you experience the best of humanity in the most dire of situations? I have been asked that question more than I can recount, and a deserving answer I am yet to conjure. Nothing will comprehend the real life experience, but I hope that through sharing a few excerpts of my daily Idomeni diary, I can give you a little window into what life was like on the ground.

Monday 11th April: On arrival, our two hour journey to Polykastro turned into six. After missing the bus drop-off, our saviour came in the shape
of a German volunteer who had recently graduated law school. She gave us an introductory low-down to life on the ground, delivering it with the memorable quote of the day: ‘I’d break down the fences and let the refugees walk across on my back if I could; it’s the duty that tails my privileged existence’.

When our team found us, we got a window-seat tour of the Idomeni area: EKO camp, Park Hotel (volunteers base), BP station, Hara Hotel and onto Idomeni. Seeing the camp for the first time, in the darkness of night, was rather surreal. We were introduced to our team members who were disbursed amid refugees, huddled around a camp fire dug out by Salam, and given a tour of our base by newbie Afghan-American, Waleed. He had arrived the day before, the day of the teargas attacks by the military, and recounted the day’s events with a somewhat haunted look.

Wednesday 13th April: 26 volunteers got arrested in one day for minor things such as using walkie-talkies and performing U-turns in the camp. Police target volunteers in an aim to deter them from carrying out their work – people are only able to stay in Idomeni due to the aid they receive. Though, from what I’ve seen, it’s pretty futile trying to get in the way of a volunteer’s will to help.

Thursday 14th April: Visited Diavata camp to help teach English; the tents were better, there seemed to be more order, but I couldn’t shake the feeling of it being like a human enclosure. No child should grow up desensitised to the presence of men in military uniforms. We came back to Idomeni to hear about ‘NATO military drills’ which entailed flying fighter jets over the camp. The children  were terrified, grabbing frantically onto their parents, running into their tents. Why would you do such a horrific thing and perpetuate fear in a camp full of people with PTSD?

Invited for dinner – and what a feast! Such a young family, shared stories of home back in Syria, so much heartbreak, but they spoke with such love and animation… The eldest brother cracked so many jokes we started to cry from laughter.

Hit by how broken the families at the camps are. The family who shared the tent with our host were at the border when it was closed, four of them made it through and six of them didn’t. If only they’d been at the border 30 minutes earlier they’d all be together in Germany right now. They didn’t want to be in Europe. They would do anything to go home. Home, however, is now an ISIS stronghold, and they had to risk their lives just to leave: ‘ISIS on the ground, government in the sky – what is one to do caught in this limbo of violence?’

Saturday 16th April: Voluntourism is a real thing, and it is the bane of a NGOs life. If you read any stories of refugees fighting for food etc., please bear in mind that 98% of the time it’s due to those distributing being utterly clueless. Sometimes people can do more harm than good, even if they mean well. This is also the moment to insert the disclaimer that not all military personnel are heartless, thoughtless policy imposers, hell-bent on making the life of everyone on the ground as difficult as possible. Some are, however, some go out of their way to bend/turn a blind eye to the breaking of regulations.

Sunday 17th April: A grApril:oup of Afghan’s are planning on leaving today so we headed to the warehouse on the way to Idomeni to pick up clothes – praying for some decent walking shoes amid the myriad of brogues (utterly useless footwear for people in a camp). Trying to cultivate anything to make their journeys to the border on foot a little easier. No doubt they’ll be caught and brought back to the camp next week.

We played another game of football, the classic Idomeni pick-me-up. Held a meeting with Idomeni Cultural Centre, and the refugees who had set up their own makeshift school in area D of the camp, to discuss collaboration and resources. At the end of distribution, we were invited for coffee by a family who were burning the figurative midnight oil. We were wrapped in blankets – which they refused to have for themselves – and fed copious amounts of freshly brewed Arabic coffee. My Arabic only got me through about 30% of the 2-hour stories, but it didn’t matter. There were moments when I knew they knew I couldn’t understand them, but there’s no language barrier to direct eye contact, a holding hand and an arm around a shoulder. This family represented every bit of kindness I had seen at the camp so far.

Monday 18th April: Yesterday was rough but today is a new day. Took our elective case to a doctor’s appointment in Thessaloniki; a girl in the waiting room insisted we take her place and see the doctor first when she realised we were from Idomeni. These little acts of kindness from locals really give you hope. Returned to the camp to news that a man had been accidentally run over by a police officer. Entered past MSF and saw him being lifted into the ambulance; with one glance I realised he was a fatal case, we’re just praying he pulls through.

Tuesday 19th April: At the camp early to have breakfast with everyone. I was holding my passport when Nasser asked to have a look. As I passed it over, I had a sudden realisation that the only thing giving me the right to roam anywhere I wish on this content – while keeping him stuck on this side of the fence 300m away – is this booklet of paper. If that isn’t privilege of birth, I don’t know what is.

Wednesday 20th April: The wind is relentless this morning. The whole camp is on lock down. I never considered wind as such a destructive element before today. NGOs are hastily stocking up on tent supplies awaiting the anticipated torrent of requests in the wake of people’s destructed temporary abodes. Once the wind died down we got back to building and our church is officially complete! The importance of prayer areas amid such desperate environments cannot be stressed enough. Receiving the comments of gratitude from the refugees gives such a sense of accomplishment – today we made a difference.

On our way home, (at 3:00 am) we pass a group of 20 refugees on the motorway. They had been walking for 12 hours non-stop. ‘They’ included two elderly persons, a disabled individual, three children and a new-born. We turn our car to seek permission from the police on the bridge checkpoint to allow us to drive them to the camp and save them from another hours walk, yet, regardless of our pleas we are refused. The pure frustration at the lack of human compassion, and ones blindness to the indignity of some regulations, is all-encompassing.

Thursday 21st April: Things took a turn at the clinic with the presentation of a Hepatitis B case. Fear of being ostracised in the camp or separated from her children had caused the patient to suffer with her symptoms for a week before her brother convinced her to seek medical attention. After a merry-go-round of consultations with the different medical organisations at the camp, we arranged for appropriate emergency referral of the patient and her family. We played one last game of football en masse. Finally got the volleyball net set up. Time for one last twilight walk around camp, or as it now feels… home.

Tuesday 26th April: Goodbyes are the worst. “The sadness of our current state, deprived of our homeland and forced to live in these horrible conditions, is exceeded only by the sadness caused by the departure of volunteers whom we come to love and accept into our families.” How lucky am I to have something that makes saying goodbye so hard?

Idomeni has now been closed for a month, and its close to 10, 000 refugees are scattered throughout the Thessaloniki area. But though this metropolis – where we saw both weddings and funerals, where the local falafel vendor was a daily face and the ‘duty free’ the heart of shopping – this hub of hope, is gone, its population still reside in military camps, camps which vary greatly in their quality, and who desperately need volunteers.

I thought I had only been in Greece for 15 days, but in reality, my mind and heart had been there since last September, when I began following the boat reports landing in Lesvos religiously while planning awareness campaigns in Leeds. If it is not in your means to physically be present in Greece, or any other country along the refugee road of travel (spanning from Lebanon to Calais), get active locally. Chances are your city will by now have their fair share of refugees, so get involved and volunteer at your local charities that help process asylum applications and, later, integration into society. Participate in campaigns and educate yourself and others in the real scale and facts of the situation; right-wing politicians are capitalising on people’s fears through miss information – we have already seen it with Brexit – and you cannot effectively stand up to such misconceptions if you do not know the answers yourself. Donate to trusted NGOs or sponsor long-term volunteers, enabling them to stay and carry out the work on the ground. There is something for everyone to do to play their part. This is the largest humanitarian crisis to hit our continent since WWII. This is going to be a chapter in the history books of our future generations.

Don’t you want to make sure you’re on the right side of history? 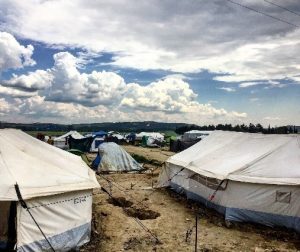 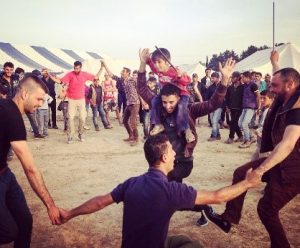 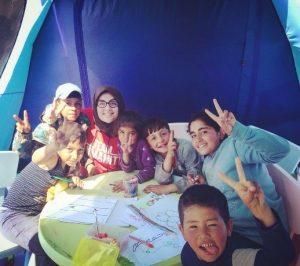 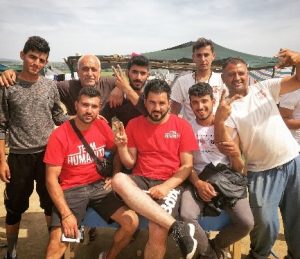 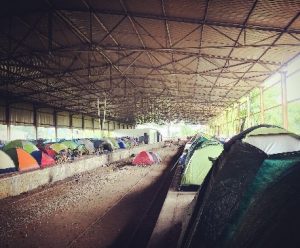 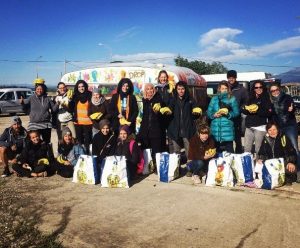 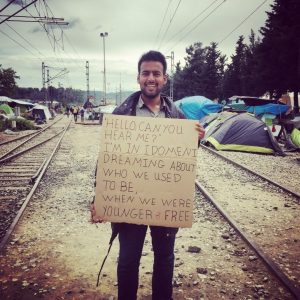 Why The Syrian Refugee Crisis Matters