Islam to be largest religion by 2070 – growing at more than double the rate of world’s population!

There will be more Muslims than Christians in the world in less than sixty years, new research revealed. The religion’s share of the world’s population will equal the Christian share – at roughly 32 per cent each – in 2070, analysis by the Pew Research Center showed.

The number of Muslims will increase at more than double the rate of the world’s population, which is expected to rise by 35 per cent in the next four decades. By 2100 around one per cent more of the world’s population will be Muslim than Christian, with the largest proportion of followers in India. Several countries are also projected to have a different religious majority by 2050. The number of countries with a Christian majority is expected to decline from 159 to 151, the report claimed. 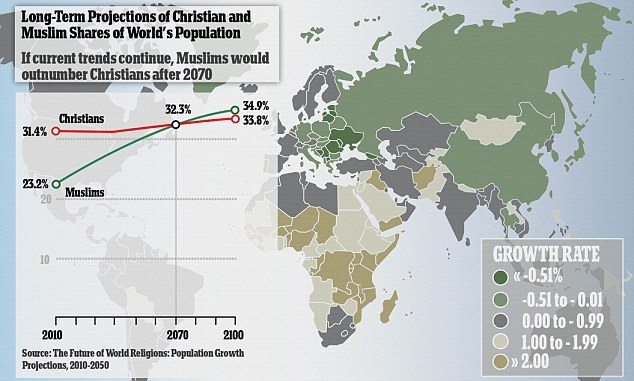 Less than 50 per cent of the population will be Christian in the United Kingdom, Australia, Benin, Bosnia-Herzegovina, France, the Netherlands, New Zealand and the Republic of Macedonia. By 2050 Muslims will make up around ten per cent of Europe’s population.

The Pew Research Center’s report said: ‘Religions with many adherents in developing countries – where birth rates are high and infant mortality rates generally have been falling – are likely to grow quickly. ‘Much of the worldwide growth of Islam and Christianity, for example, is expected to take place in sub-Saharan Africa.’

The data also revealed that the number of atheists, agnostics and those who are religiously unaffiliated will decline from 16 per cent of the world’s population to 13 per cent in the next four decades. Buddhism will also decline, with its followers decreasing by 0.3 per cent.