“Yes, Ramadan is a communal time of year for Muslims. But that does not give you the right to insinuate that Muslims will break/flout the law during the lockdown.” 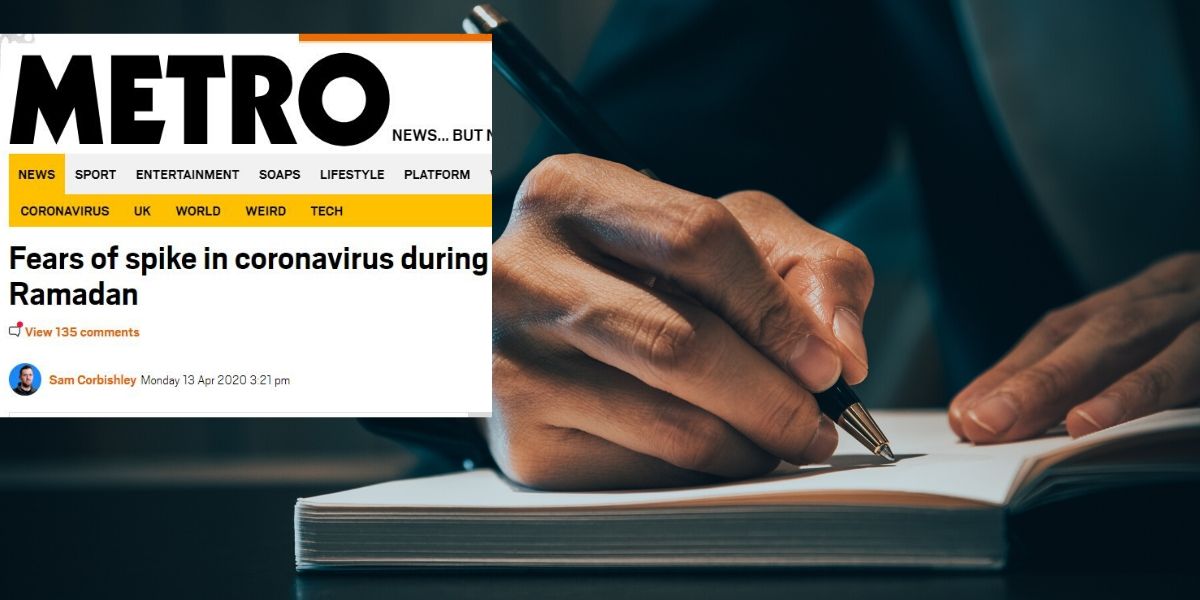 “Yes, Ramadan is a communal time of year for Muslims. But that does not give you the right to insinuate that Muslims will break/flout the law during the lockdown.”

An open letter in response to The Metro’s latest piece, titled “Fears of Spike in Coronavirus During Ramadan”:

During this time of national and global emergency, newspapers still pursue their vindictiveness and vendetta against millions of Muslims across the world. Unfortunately, I have been reading very damaging articles which have been suggesting that Muslims will spread Coronavirus, Muslims are to blame for COVID-19, or the recent article by the METRO which suggests Coronavirus cases will rise during Ramadan.

This is not acceptable, and not only was this article inflammatory but it stirred hatred and caused much hurt to the Muslim community. Following this highly discriminative article, I made a complaint to the METRO, however I am yet to hear back from them.

I spoke to my good sister Mariam Shah regarding this; one thing that struck me the most was her motto in life: “You don’t need to shout (or swear) to be heard”- its inspiring to see her so positive despite all the hostility against Muslims in the media. Her positive attitude and ethos are clearly reflected in this letter she wrote:

“Thank you Sam Corbishley (Metro News) for your anti-Muslim article. You are quite clear in your aims to create and incite hatred towards Muslims. I just wanted to clarify a couple of things:

So dear readers, please don’t let inaccurate, misleading articles like this one allow you to fear or hate Muslims. Please use your common sense and challenge this narrative – we are in this together. Muslim doctors, nurses, and key workers are fighting on the front line too you know.

Edit: The Metro has since responded to the author’s formal complaint email: “Please be assured that from the outset, [we] do not tolerate racism or discrimination and we have looked into the concerns you have raised…We stand by our coverage as a fair and accurate report on plans for the celebrations [of Ramadan] and we do not agree it incites hatred, is toxic, or inflammatory.”