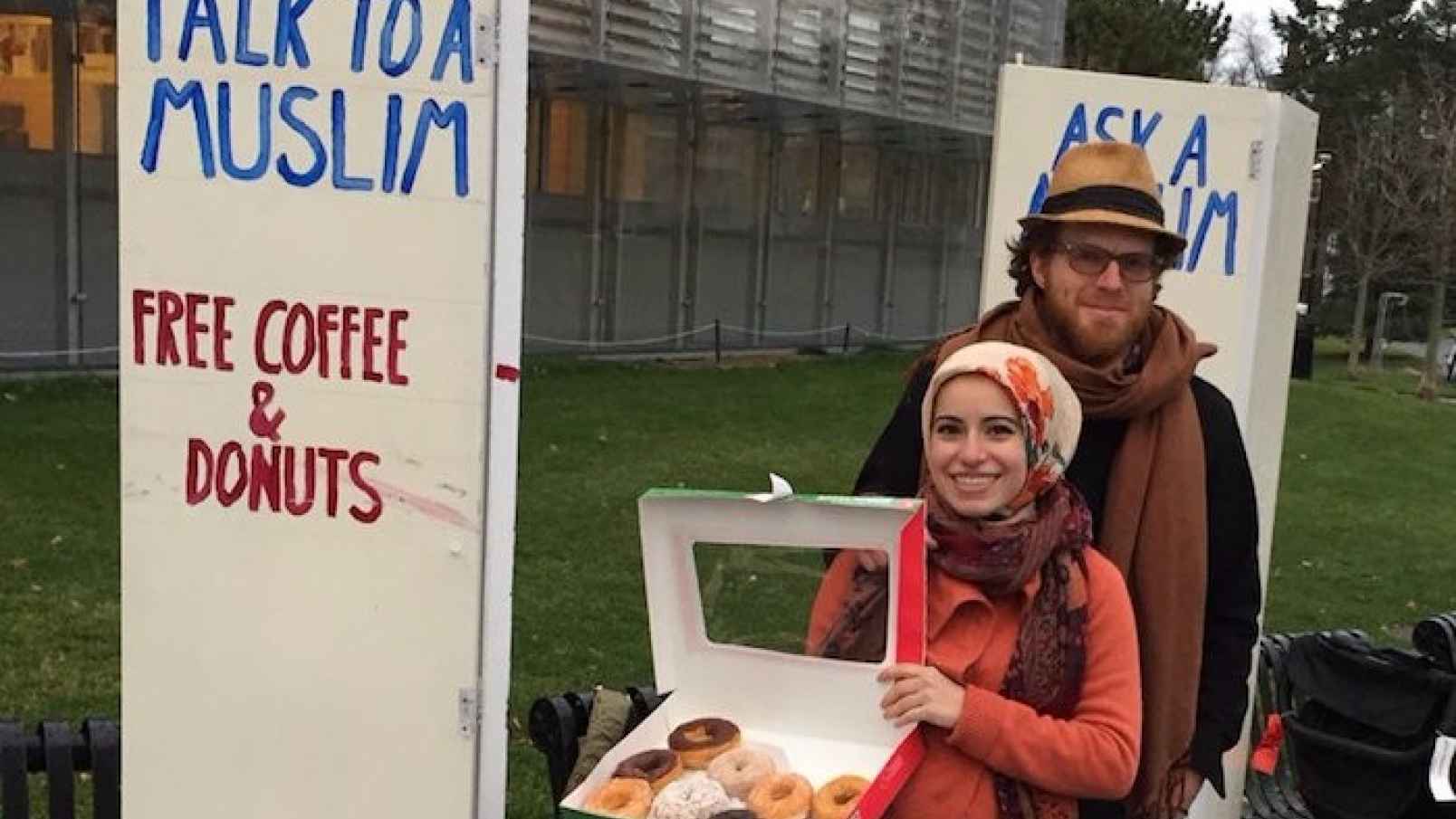 With the rise of Islamophobia and hate crimes throughout the world, the need for open dialogue is becoming increasingly important. Mona Haydar and Sebastian Robins are a young married couple who hope to conquer fear through fellowship and understanding with their “Ask a Muslim” initiative. By setting up a booth outside the Cambridge Massachusetts Library and passing out free donuts and coffee to the passersby while inviting them to ask questions about Islam, they’re tackling Islamophobia one person at a time.

Q: Salaam alaykum, Sebastian and Mona, it’s a pleasure to meet you. Where did the idea for “Ask a Muslim” originate? What did you hope to achieve?

Sebastian: WaAlaykumSalaam! (And peace be upon you as well!) Many years ago I saw a story about an Iraqi-American man who traveled the country with a simple white booth reading, “Ask An Iraqi.” It really stuck with me – the simplicity of it, the timeliness, the vulnerability of his actions, the innocence. I loved the idea of letting others lead with questions and being open to dialogue.

After the San Bernardino attacks, and the equally horrific responses to the tragedy, we felt paralyzed with fear and hopelessness; feelings that I think were widely shared. We felt like we had to do something, but not only did we not know what to do, we felt afraid to leave the house.

Mona: We had to get out and do something. We thought donuts would be a good place to start!

Q: Were you pleasantly surprised by the huge (and mostly positive) reaction from your initiative? How did the negative backlash affect you?

Sebastian: Yes, we were completely surprised! We had no idea it would reach such an audience and strike such a cord. And it’s been great. At the same time, the press and attention we’ve gotten only underscores what a fragile time we’re in: Muslims are afraid of being Muslim; conversation, curiosity and dialogue aren’t happening; we’re afraid of offering up a cup of coffee to a stranger, and even more afraid of taking one.

To be honest, most of the negative backlash is coming in the comments section of the online news articles, and it’s really hard to take some of them seriously. Luckily we can find humor in the negativity most of the time.

Mona: When my Facebook page went crazy with shares and likes, I was shocked. I thought what we did was pretty unremarkable and have since realized as a result of the huge response that people LOVE love and want more of it in their lives. We offered that in the form of free conversation over donuts and coffee. We all just need a little more love!

Q: Sebastian, as a convert, do you think you’re changing some people’s perception of what American Muslims look like?

I don’t know. I hope so. I have this funny fantasy that people will meet me (I’m White), and say, “You’re a Muslim? Really? Oh, I guess I don’t hate Muslims after all, I’m just racist.” Because I think this is where a lot of the anti-Islam sentiment is coming from: thinly veiled racial bigotry, hidden behind so-called religious differences, or fears of national security, or concerns about refugees and the economy. We’re afraid of (and mostly don’t like) people who don’t look like us, and somehow it’s become acceptable to hide that behind “creeping Sharia,” terrorism, and immigration. But am I changing any of that? Probably not. People come up to the booth to talk to Mona and think I’m just there mooching donuts. [laughs]

Q: Mona, do you ever get frustrated by how some questioners are unwilling to hear you out?

I work really hard at trying to be positive all the time and it really helps me out there when talking to people. I try to see where they’re coming from in their unwillingness. Is there pain there? Grief? Sorrow? I try to feel into that, and more often than not that empathizing gets us into a place of real connection. If I can take myself and namely my ego out of the equation and feel their fear or hurt then maybe they can see my humanity and kindness. That’s where we should start. Compassion is the key in all these interactions. I’m doing this to grow more understanding and compassion for others inside myself first and then maybe compassion can grow in others for me and my community.

Q: What do you wish for the future of Muslim and Non-Muslim interaction?

Sebastian: For one thing, that there was more of it! Anti-Muslim sentiment is at an all-time high, yet most non-Muslim Americans have never even met a Muslim. And many Muslims aren’t visible to non-Muslims: out of fear or because they live in tight communities or because their actions and presence are ignored by most media outlets.
What I learned from doing the “Ask A Muslim” booth, and from the responses online, is that there are thousands, if not hundreds of thousands of people of all traditions and cultures, who are hungry for dialogue, who are craving some sort of healing, who are appalled by what our so-called “leaders” and candidates are saying.

Mona: I wish for more togetherness in our daily lives as well as in the terminology we use. There shouldn’t be such a term as “non-Muslim.” There are Muslims, and there are people of other faiths, cultures, ideologies and traditions. I wish for more open palms turned to the sky appealing to the Creator; for more love. I wish for that appeal to manifest in the hearts of our children, who we can raise, with the help of God, to have a good opinion of everyone and see all people as potential beloveds.

Q: What would you like to say to those people who wish to help promote peace but don’t know how?

Sebastian: Try something. Try anything! I don’t mean to sound corny, but it really is the small things that make life beautiful. And, to be honest, we set up our booth as much for ourselves as for anyone else. We were tired of being afraid and paralyzed. We were tired of waiting for someone else to save the day. Of course we’re not really saving the world with this booth, but we’re meeting great people, giving them some hope, and getting some hope and light in return.

If we were living in, say, Tuscaloosa, Alabama, we probably wouldn’t have set up a booth. Maybe we would have tried to support the nearest MSA, or find the closest re-settled refugees and bring them a meal. Or donated to an aid organization. Maybe we would have sent roses and chocolates to Ted Cruz and Marco Rubio with a loving note attached.

If people don’t know how to start, have them call us – we’ll give them something to do!

Mona: Start with your neighbors. Do you know them? If not, introduce yourself. Give gifts. If you do, get to know them better! Do they have enough food every night? What do they do for fun? Give more gifts. Be the best neighbor anyone could ever wish for. Shovel snow off driveways and leave them books of poetry at their doorstep. Invite them over for tea. Love starts in our homes and peace is just one element of love.