Hollywood and hate narratives: Can Jack Ryan save us all?

Hollywood and hate narratives: Can Jack Ryan save us all?

At a time when 50% of U.S. adults (Pew Forum) maintain a view that Islam is not part of mainstream American society, it was unfortunate to see how the broader Muslim characters in the series were again portrayed as creepy immigrants with an anti-west agenda. 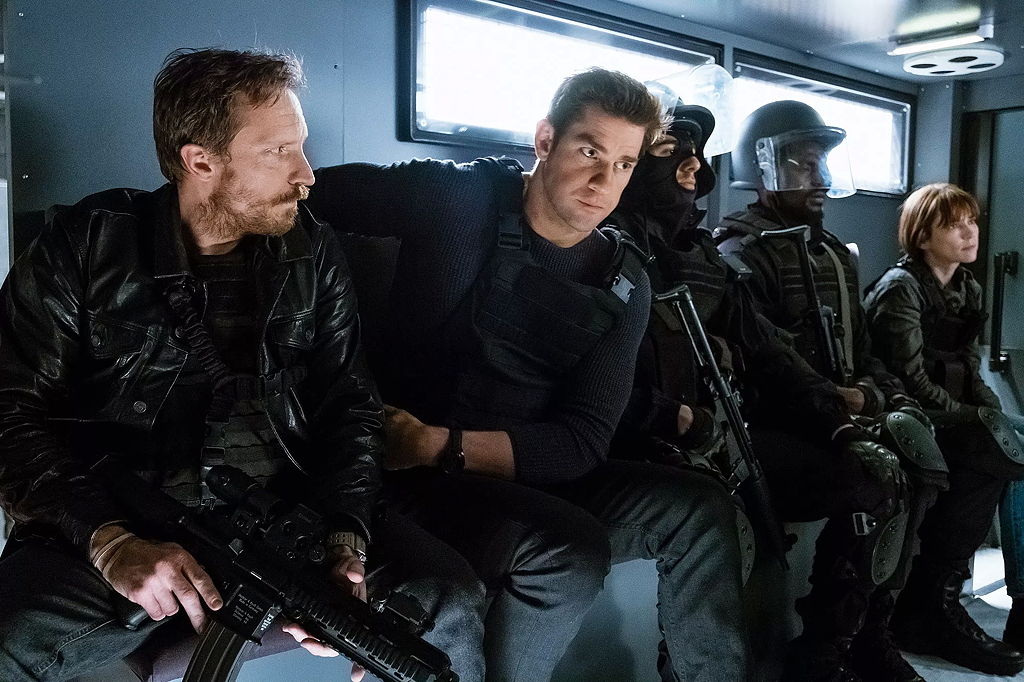 At a time when 50% of U.S. adults (Pew Forum) maintain a view that Islam is not part of mainstream American society, it was unfortunate to see how the broader Muslim characters in the series were again portrayed as creepy immigrants with an anti-west agenda.

In a few weeks, Season 2 of ‘Tom Clancy’s Jack Ryan’ will be released on Amazon. Critics continue to discuss how Hollywood’s mainstream cultural productions portray Muslims and other minorities.

There aren’t many contemporary instances of screenwriting that deal judiciously with raw faith phobia, racism, and prejudice. Season 1 of ‘Tom Clancy’s Jack Ryan’ took a stab at it during a time when showrunners, writers, and producers find it convenient to not deal with real-life prejudice and racism. The looming question remained: was it is just another sanitized version of Homeland? An overwhelming majority feels it was.

Hollywood narratives historically have effortlessly toed our foreign policy. Anticipation remains the raison d’etre of a well-written story, and here it seems to work best and translate into success when the story does not offend the status quo. However, there are some fine examples over the past decades that continue to shine because of their sheer simplicity and audacity in dealing with some of these issues rather than tiptoeing around this. Whether it is Jeffrey Nachmanoff’s ‘Traitor’, or Regina Roses’ ‘12 Angry Men’, the conceit was in how blatant and yet conflicting the tackle was.

One of the lesser-known examples that continues to generate passionate discussions across the online social communities is the emotional response offered by Araztoo Waziri (Pej Vahdat), a Muslim scientist, to Finn Abernathy (Luke Kleintank) in an episode of Bones (2005-2017). Finn offers to take over Araztoo’s work as the forensic team realizes the remains they were trying to identify could be those of a 9/11 victim. As Clark Edison (Eugene Byrd), an African American, and others huddle around the remains, television audiences are treated to a rare minute of an unadulterated lesson in history.

Finn: Is this too difficult for you, Arastoo? Because I’d be more than happy to do as much as needed to ease your load.

Arastoo: Why would it be more difficult for me than anyone else?

Finn: Because of— because you share the same religion as those men.

Arastoo: Is it too difficult for you to work with Dr. Edison?

Arastoo: You share the same religion with men who cherry-picked the Bible to justify slavery.

Arastoo: But still, your words have meaning, don’t they, Mr. Abernathy? Those assumptions you made, those quick generalizations. What about the vengeance and the bloodshed in the Old Testament?

Arastoo: If he’s not old enough to know, he’s certainly old enough to learn. The Crusades, the Inquisition— are these events guided by a religion of peace? No, they were guided by self-important men who think they know more than the God they claim to worship. This was not the work of religion. It was arrogance. It was hypocrisy. It was hate. Those horrible men who hijacked those planes, hijacked my religion that day, too. They insulted my God. So, no, this isn’t too difficult. It’s a privilege to be able to serve this victim, to show him the care and love that was so absent that day.

Finn: * Deep breathe* Thank you…sir. I’m sorry. And thank you for taking the time to set me straight.

This was 2013. Meanwhile not in some parallel universe, in the same space, Homeland (2011- ) continued its diatribe against minorities focusing primarily on Muslims. One wonders when would the screenwriters realize that brainwashing only further erodes what we’re all working towards. US foreign policy has always dictated mainstream media and the villains have gradually changed in the past decade. What started from characters from the USSR, eventually turned into the all-too-familiar villain from the Middle East. The attempt by the showrunners of Bones (2005–2017) just two years after 9/11 to introduce Vaziri, some say, has been instrumental in initiating a conversation in fleshing out more nuanced Muslims characters.

The past few years have seen a gradual increase in the emergence of political idealists as villains across all forms of content. This dynamic shift hearkens back to the exceptionally well written Arlington Road (1999). The same shift was evident in Season 1 of ‘Tom Clancy’s Jack Ryan’. While the show did eventually resort to a Muslim antagonist, Mousa bin Suleiman, it did make a feeble yet noticeable effort to bring a certain nuance to the character. Given Tom Clancy’s political and religious affiliations, this was expected. There is still a sense that show-runners and producers should acknowledge the polarizing narrative they end up perpetuating with the content they put out.

Much has already been regurgitated about how Muslims have been depicted in Season 1 of ‘Tom Clancy’s Jack Ryan’. There’s obvious contention about how clear the narrative was against Muslims. At a time when 50% of U.S. adults (Pew Forum) maintain a view that Islam is not part of mainstream American society, it was unfortunate to see how the broader Muslim characters in the series were again portrayed as creepy immigrants with an anti-west agenda. As if years of covert and military interventions overseas have absolutely no bearing on one’s mental health or life trajectory.

Even with a backstory to Suleiman’s character, (he was orphaned during the Lebanese war, and shared a passionate relationship with his brother) he was still the same Muslim terrorist who remains a threat to the American way of life. It granted legitimacy to the base which cheered how the conversation about gun violence is overblown, and how vulnerable we remain to acts of terror perpetrated by Muslim terrorists (Catholic church attack … really?). We were then led to believe how the only respite is in the form of a brooding gun-trotting white saviour. All the while as the writers haphazardly tossed in a subplot where a drone pilot was so repentant about taking an innocent life that he travels all the way to Syria to meet his victim’s family, and offers his ‘casino winnings’ as restitution for bombing and killing their only son.

The only saving grace of this sequence was when he was actually in the house that he has seen from afar for months. The exchange between him and the father was poignant and shed a light on how devastating war can be. Still, portraying the drone pilot again as the white saviour when Sulaiman’s wife Hanin was being attacked was ludicrous – very anticlimactic for Hunain’s character as she traversed across the country on her own with her kids. The narrative again being that a drone pilot sitting comfortable trading bets with a colleague could be considered a casualty of war. As if American Sniper (2014)  wasn’t traumatic enough? To (over) compensate, James Greer (Wendell Pierce) was portrayed as a Muslim convert who is genuinely conflicted in his faith. Quite unlike the character in Tom Clancy’s books, where the Greer character is not Muslim.

Despite all the criticism, there’s evidence in the series that villains are not just mindless assailants, but that their motivations have their origins somewhere in American hegemony being pushed across violently by our own war machinery. This hostility towards the west has its genesis in a backstory; particularly in the loss of a loved one, in the case of Suleiman. As his actions are clearly shown to be motivated by revenge and not because of religion, one wonders how many of us watching would be able to discern this nuance?

Much has changed since the 2016 elections. America continues to struggle. Last year at a congressional hearing, a senior official of the ADL testified that 39 out of the 50 extremist-related attacks last year were perpetrated by white supremacists who were radicalized by different online resources. In contrast, there was just one instance of a violent attack by a 17-year-old in Florida who claimed to be inspired by ISIS. Perhaps this is the conversation we needed? It seems like Hollywood is finally asking itself: will replacing POC/Muslims as villains as opposed to the threat of actual guns make or break the system? After all, Miss Sloane (2016) failed miserably at the Box Office (less than $60,000 on opening weekend) despite being critically acclaimed in initial screenings.

As Hollywood grapples with these questions, we’re at the proverbial fork. Fight-or-flight. Characters in mainstream media should be more than just a sum of their skin color and religious upbringing. Many times fate plays an important role in a character’s trajectory. To believe otherwise is naive. But showing a group of people protesting against an invasion, and leaving out the context of their grievances is not odd in the grand Hollywood tradition. We need more stories that explore the ethos behind conflict because Messianism is not an Islamic franchise, despite what ISIS would want us to believe.

‘Tom Clancy’s Jack Ryan’ has clearly made an attempt to rummage through this mess at a time when most mainstream content focuses on a ‘us-vs-them’ narrative. One can hope this is just the beginning.

Azfar Rizvi
AZFAR RIZVI is a New York-based filmmaker and a Hollywood technical consultant for productions involving diversity, Islam and South Asia. He is currently assisting a Fortune 500 navigate through policy and content for India and Pakistan. @Twitter: AzfarRizvi