The British government is responsible for the alarming rise in Islamophobia, according to IHRC (video)

Britain is turning into a ‘Stasi state’ subjecting its Muslims to ever increasing levels of repression, according to a new report to be published next week

Since well before 9/11 the British state has come to view Muslims as a suspect community that is incapable of internalising a level of deferent loyalty that the state does not expect from any other social group, according to the report.

Viewed in this light, Muslims are subject to discriminatory policies that are at once punitive and also designed to drag them to the state’s politically expedient notions of what constitutes national identity.

Special attention is given to the government’s PREVENT anti-extremism strategy which the authors say is demonising and alienating Muslims. Through detailed analysis to the PREVENT strategy and the Channel programme, the authors detail the way surveillance focused specifically on Muslims means they are assumed guilty of terrorism by association. With an overview of headlines in popular media, the report highlights embedded stereotypes and coded discriminatory language. The Muslim minority becomes victim to the social attitudes of the majority – learned through government policy and the media they consume – and this is then expressed in acts of hatred, hostility and violence.

This is the second such study the authors have undertaken in the UK and it takes into consideration age, religiosity and visible Muslimness as well as income and work status. Comparisons are also drawn with the findings in 2010 and the results are alarming.

Between 2010 and 2014 the number of people who reported seeing Islamophobia directed at someone else spiked from 50% to 82%. In the same period the number of people stating they had witnessed negative stereotypes about Islam and Muslims jumped from 69% to 93.3% suggesting these experiences have become almost universal for Muslims.

The authors blame the worsening conditions on what they call a ‘hate environment’ that has been deliberately whipped up by the media, politicans and the commentariat, the purpose of which is to ‘otherise’ Muslims and legitimise discriminatory treatment of them through official policy.

They state: “The hate environment created by negative political and media discourse, mutually constituted with laws that discriminate including the CTS Act 2015, work together to create a hate environment within which the negative experiences of hated societies are produced and as this research shows, in the UK context, have worsened over the five-year period.” 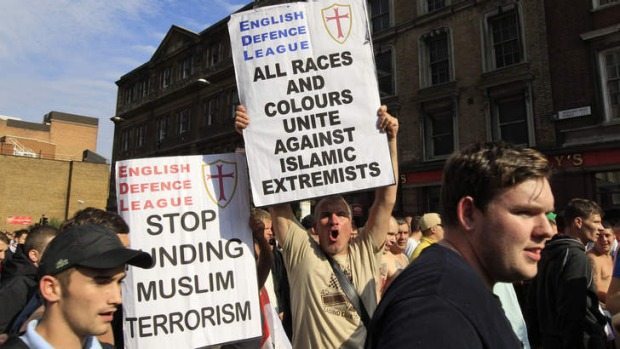 The recommendations listed are several. Action has to come outside the Muslim community, from the centres of power, in order for the current discourse to change. There must be media regulation in terms of dealing with structural inequalities and systemic racism. There is a need for stronger relationships between Muslim organisations and alliances between groups that have campaigned against prejudice. A drastic change in government strategy towards British Muslims is required and at the very least a structural understanding of racism has to be developed.

Rowan Williams the ex-Archbishop of Canterbury said: “This report offers a structural analysis of contemporary British Islamophobia, demonstrating how policies and media representations have generated an environment in which Muslims are seen as worthy of hatred….What is described here is a serious reproach to our society’s most humane ideals and values.’