While the fear of religious extremists has reached a new high over the last few years, you might be surprised to learn how many instances of terrorism in the EU over the past five years were actually religiously motivated.

According to statistics from Europol, less than two per cent of all recorded acts of terror were perpetrated with religious motivations, with an even smaller number being committed by Muslim extremists.

Estimates suggest only around two per cent of all terrorist attacks were committed by Islamic groups or individuals.

For example, out of the 152 terrorist acts in the EU in 2013, only two were religiously motivated. In 2011, none of the 174 attacks were ‘inspired’ by religious organisations.

The reason for this is that the majority of terrorist activity concerns ethno-nationalist organisations, who often commit acts of terrorism that have low, if any, casualty rates, meaning they do not get extensive news coverage. 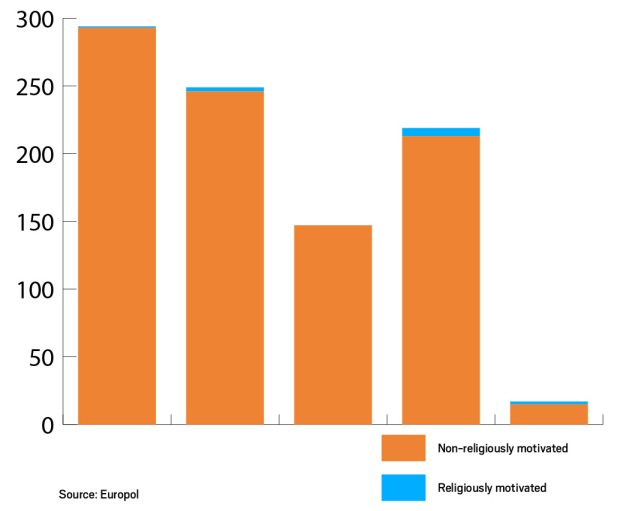 Islamist terrorist groups are also far less of a danger than they nationalist counterparts in the USA, with researchers at Princeton University finding that Islamist extremists were responsible for only 6 per cent of attacks between 1980 and 2005.