Islam’s Take On ‘An Eye For An Eye’

This is not the first time that Western civilization has convinced us, without substantial backing, that something is inherently wrong.

There is no hiding or denying the fact that, yes, Islam does believe in the principle of “an eye for an eye”. However, before you begin to pass judgment on this action with any preconceived notions, be objective for a moment; suspend disbelief. This is not the first time that Western civilization has convinced us, without substantial backing, that something is inherently wrong.

The discussion here has everything to do with the balance of justice and what it, as a loaded term, means in Islam. Firstly, common sense for all can dictate that if someone wrongs you, you have a right to react. It’s merely the law of nature: for every action, there is an equal and opposite reaction. Of course, mercy and forgiveness are always on the table, but in being wronged, you still hold the fundamental right to be compensated something if that’s what you desire. What that something amounts to is the real question at hand.

The Barbarism of ‘An Eye For An Eye’

A prime example of why assigning working definitions to ideals like justice, in this way, can be seen in one of the worst atrocities to strike the United States in recent history: I’m talking about 9/11.

The 9/11 attacks were absolutely atrocious acts of violence that resulted in the loss of approximately 3,000 innocent lives and another 6,000 severe injuries. America, as a nation, bled from the tragic experience and continues to mourn the event to this day. In the same year, 2001, America responded by launching the “War on Afghanistan”, an operation that persisted for 13 years and triggered an effective apocalypse in Syria and Iraq. Many of the cataclysms that have befallen the Middle East since are traceable to this one invasion, not to mention the 26,000 deaths that it wrought and further 29,000 injuries it procured. Are you seeing how the numbers compare?

Let’s take it even further. Do you recall the night before the Paris attacks, when Beirut was bombed in a double suicide attack killing 40 and wounding another 239 innocents? You certainly didn’t receive the option to upload a Facebook frame to demonstrate your solidarity with Lebanon. What must have been going through the minds of the citizens of that country when the world dismissed their tragedy as passive news? Had their blood become so cheap? Where were the lit monuments bearing the color of their flag to honor their lost lives? This disassociation subtly engendered by the West perpetuates to the hearts and minds of people often beyond their greater awareness.

America has crafted this image of itself as the victim for 17 years now. Yes, they were attacked and there is not a single person that can deny the intensity of the offense, but hasn’t America found supposed justice many times over in bombing the Middle East into oblivion? And here we were thinking an eye for an eye was barbaric.

The Islamic Conditions For ‘An Eye For An Eye’

The primary verses of contention when considering ‘an eye for an eye’ in Islam are:

“As for the thief, both male and female, cut off their hands. It is the reward of their own deeds, an exemplary punishment from Allah. Allah is Mighty and Wise”

“The punishment of those who wage war against Allah and His messenger, and strive with might and main for mischief in the land is: execution, crucifixion, cutting off the hands. That is their disgrace in this world and heavy punishment is theirs in the hereafter.”

In addressing this, first it should be noted, for non-Muslims specifically, there is no compulsion in religion and so the governing laws of the Quran are not applicable to them. Though practicing Muslims may condemn actions of hostility committed against them, like the ridicule of Prophet Muhammad by the satirical company Charlie Hebdo, the matter is ultimately moot as they may only go so far as to condemn their actions in words. As it is, people are only of two kinds: either brothers in faith or equals in humanity.

Second, the distaste you may feel in reading the two above verses is demonstrative of the way in which the popular media misconstrues Islamic beliefs in order to create a viewpoint of Muslims that aids their created narrative. After all, the greater the public divisiveness, the more “Breaking News Alerts” and, most importantly, the more money. This is the verse that immediately follows the one above:

“But if the thief repents his crime and amends his conduct, Allah turneth to him in forgiveness; Allah is Oft-Forgiving, Most Merciful”

Remember, punishment exists because responsiveness is a necessity in a just society and because Islam is a religion of logic and order; a religion for all time. However, mercy and forgiveness are always on the table! In fact, Allah prefers this. He says:

“Those who give in times of hardship, those who control their rage and pardon other people – Allah loves the good doers.”

An important feature of criminal law in Islam is that victims have the option to choose between mercy and claiming compensation; all situations are different and should be carefully assessed by the individual who is wronged, with the freedom to choose how to react remaining assured. The Holy Quran says:

“Never should a believer kill a believer, but if it happens by mistake, compensation is due: he should free a believing slave and pay compensation to the family of the deceased, unless they remit it freely…for those who find this beyond their means, fast for 2 months by way of repentance to Allah.”

“The law of equality is prescribed to you in cases of cold murder. The free for the free, the slave for the slave, the woman for the woman. But if any remission is made from the family of the slain, then grant reasonable demand and compensate handsomely. In the law of equality, there is saving of you that ye may restrain yourself.”

Perhaps the single-most overlooked concept in Islam is that of forgiveness, which is entirely a shame because it is a constant theme throughout the faith.

“We ordained therein for them ‘life for life, eye for eye, nose for nose, ear for ear, tooth for tooth, and wounds equal for equal. But if anyone remits the retaliation by way of charity, it is an act of atonement for him.”

Another important verse, often quoted only by its first half:

“Fight in the cause of Allah those who fight you. But do not transgress limits; for Allah does not love the transgressors…turn them out from where they have turned you out…such is the reward of those who reject faith. But if they cease, Allah is Oft-Forgiving, Most Merciful.”

As it says above, Islam does not promote violence in reckless abandon, but if attacked, it becomes obligatory to respond fairly and within bounds for the maintenance of dignity and respect. We do not let ourselves be taken advantage of, but we also do not launch unbridled warfare and limitless persecution. Take it from former President James Madison:  “If tyranny and oppression come to this land, it will be under the guise of fighting a foreign enemy.” 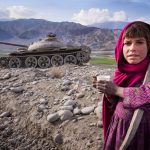