9 Years of War: Our Syria Response

The Syrian people are highly skilled, resilient, and strong. Many of them used to be doctors, teachers, students, and professionals before the war began. But after almost a decade of conflict, millions of people are still struggling to survive.

The Syrian people are highly skilled, resilient, and strong. Many of them used to be doctors, teachers, students, and professionals before the war began. But after almost a decade of conflict, millions of people are still struggling to survive.

Have you ever been asked, “What’s your 5-year plan?”

How about, “Where do you see yourself in 10 years?”

We spend so much of our time thinking ahead, drawing up plans, and aspiring for better for ourselves and our families. But no one ever plans to be a victim of war. No one plans to be a refugee.

10 years ago, the Syrian people were hopeful. But what they’ve endured is 9 years of violence, terror and poverty, in a war that they never asked for. For millions of children, it’s all they’ve ever known.

Here at Penny Appeal, we’ve been on the ground since the conflict began, protecting precious lives as one of the most active UK charities helping Syria.

Read on to find out how your Syria charity is making a huge difference. 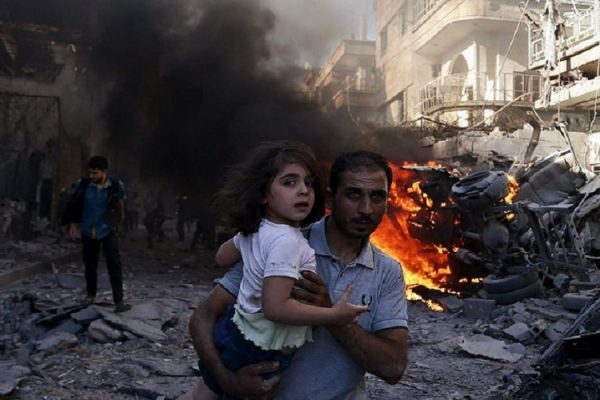 “It feels like the rest of the world has forgotten about us. In Britain, nobody’s really talking about it in the news or in politics. It’s not being dealt with as an international issue.” – Dr Asaf Mohammed, the Cross-Border Manager for International Blue Crescent and Penny Appeal.

The Situation in Syria

13.5 million people need humanitarian aid within Syria according to the UN, and that number is growing as around 900,000 people – half of whom are children – have been forced to flee Idlib in the past few months.

We’ve been on the ground since the crisis began, and with the help of our kind-hearted donors and incredible partners, we’ve been able to help over 150,000 people.

Keep reading to find out more about our vital emergency programmes in Syria, or donate now to help Syrians get the support they need. 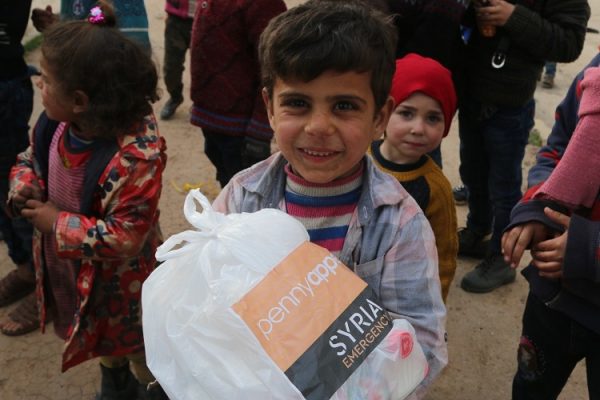 Over the last 9 years, here at Penny Appeal, we’ve worked consistently across the country, providing emergency relief with your Syria charity, and supporting displaced people in crises which exacerbates an already difficult situation, like the flash floods caused by Storm Norma in 2018 and the current violence in Idlib.

In the last year alone, we’ve delivered over 2,210 food packs with the help of our charity partners, Syria Relief and International Blue Crescent, as well as delivering over 1,000 additional Food Packs and 1,000 Hygiene Kits to people currently fleeing Idlib.

Nazim Tasadiq, our Global Humanitarian Response Coordinator, is currently on the ground in Turkey, organising our response with our partners. Watch the video below to find out what our Food Packs contain, and how they make a difference to those in extreme need.

“One word that sums up the situation now is hopelessness. I have a baby now, and I think to myself, ‘Imagine if you had to pick up your daughter of 15 months, grab your wife and have to move hundreds of kilometres by foot, and then that place gets bombarded as well and conflict begins there’. It’s over 9 years of living like this, living from a backpack. It’s about trying to find safety; trying to survive.” – Nazim Tasadiq, Penny Appeal Global Humanitarian Response Coordinator.

60% of Syrian hospitals are now closed due to conflict, lack of staff, and medicine. Many hospitals have been actively targeted by bombardments; one of the most heinous of war crimes.

This has left millions of people vulnerable; especially the 6.5 million internally displaced persons (IDP) in Syria, many of whom are living in informal camps in tents and makeshift shelters.

Penny Appeal has been working alongside Syria Relief to run a Mobile Health Clinic specifically for pregnant women and children, who are some of the most vulnerable in this crisis.

Our Mobile Health Clinic has helped thousands of displaced women and children across Syria to survive. Read more about the amazing work of our mobile clinic – or ‘hospital on wheels’ – here!

“I hope the Mobile Health Clinic comes more often, and helps other children who are suffering.” – Asma, 11, Syria. 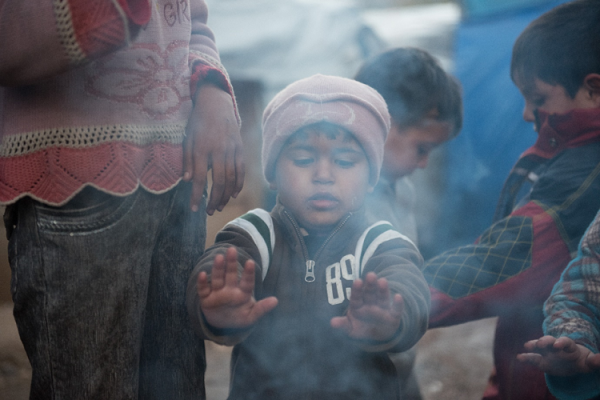 The winter months are the most challenging for refugees and displaced Syrian families, many of whom don’t have adequate housing or heating.

We’ve all seen the heart-breaking news stories about Syrian children who have died in refugee camps – the World Health Organisation reported that 29 Syrian children lost their lives last winter.

Every winter, we work hard to make sure that as many Syrian children are protected as possible. Last winter alone, we gave food, heaters, fuel and blankets to 3,468 internally displaced Syrians, as well as giving shelters, warm clothing and blankets to 2,625 Syrian refugees in Lebanon and Turkey.

2.8 million Syrian children aren’t getting the education that every child deserves.

Penny Appeal has been supporting the education of Syrian refugees in Turkey and Lebanon, providing hundreds of refugee children – who have been excluded from mainstream schools for years – with an informal education, life skills, hygiene awareness, and psychosocial support.

An 11-year-old Syrian girl we helped in Lebanon told us, “I have always been really upset when I see my neighbours carrying backpacks every morning and going to school. But now I can show them that I go to school too!”

The Syrian people are highly skilled, resilient, and strong. Many of them used to be doctors, teachers, students, and professionals before the war began.

But after almost a decade of conflict, millions of people are still struggling to survive.

Thank you for helping us support hundreds of thousands of people through your generous Syria charity donations over the last 9 years. Let us all keep supporting, keep working hard and keep praying for an end to this suffering.

May Allah (swt) protect the Syrian people; may the next 9 years be something better.