Young Muslim man to walk from Iraqi city of Najaf to Karbala, amidst threats from Daesh (ISIS) terrorists, on Arbaeen walk to raise money for Iraq’s internally displaced refugees.

“I’m dodging ISIS bombs & walking Najaf to Karbala for Al-Ayn Social Care Foundation because we have a duty to assist the orphans & displaced.”

The devastation caused by ISIS has contributed to a refugee crisis in Europe which has garnered much global media attention.

Less well known is the refugee crisis currently underway within Iraq itself, with hundreds of thousands of people fleeing from the Areas controlled by ISIS.

The militants have also killed thousand of people via their bombs and bullets, leaving behind orphans and widows in need of support, which the country is currently unable to provide fully.

As such I’m going to be fund raising for two projects run by the Al Ayn charity who have ijaza from Ayatollah Sistani, with the funds to be split equally between the two. 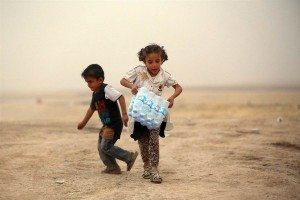 Supporting the orphans to deal with the trauma they have faced is an absolutely vital project that needs to be implemented ASAP.

The second project will be to raise funds to provide milk to the infants of the internally displaced people. There are thousands living in unsanitary, cramped conditions and it is the youngest who suffer the most.

“I will, by the permission of God, also be walking between the two Holy Cities of Najaf and Karbala. This is a 75km walk that usually takes a couple of days and as well as being a physically challenging endeavour, it also a deeply spiritual experience for millions of people (upto 20 million people performed the pilgrimage last year in defiance of the ISIS terrorists). It will be the first time I do the walk and wish to use the occasion as an opportunity to help in what small way I can.”

So please donate, whether generously or not, for giving a little is better than nothing at all!