Hundreds of British Muslims threw the doors open to mosques across the country in an initiative to get non-muslims to come and explore. As Nargess Moballeghi reports the “Visit My Mosque” day hoped to break down myths and build understanding at a tense time for faith communities in Britain and across Europe.

The Muslim Council of Britain organised a national #VisitMyMosque day on, where British mosques opened their doors to the general public.

Mosques shared tea and cakes alongside an insight into the day-to-day goings on of a busy Muslim centre of worship. 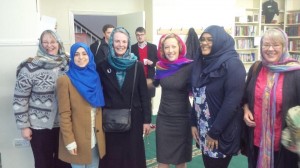 Members of the community were there to get to know one another better and be on hand to answer questions about Muslims and Islam. Local mosques also invited inter-faith leaders as well.

#VisitMyMosque day is part of a national initiative by Muslims to reach out to fellow Britons following tensions around terrorism. Many mosques have open door policies, and many have special set days to invite the local community around them. We celebrate these existing schemes as well.

This is a pilot national event and we hope, based on feedback, to be repeating it again later in the year.