A Muslim woman was injured in North Carolina after several shots were fired at her family’s home on Tuesday morning, in an incident her husband thinks could be motivated by their religion.

Charlotte-Mecklenburg police are investigating the shooting, which occurred around 1am.

The homeowner, Abdul, asked to only be identified by his first name. His wife was wounded by a bullet while lying in bed. She was taken to the hospital and is expected to recover. 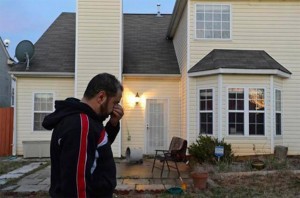 “We don’t know what this is related to, if it was a random shooting or targeting,” Abdul told reporters outside his home. “We hope it’s not the second case.”

Police said it is too early to determine a motive or whether the family was targeted.

“Why our house in particular?” Abdul told WBTV. “Why aren’t the other houses shot at? Looks like we were targeted for one purpose or another, and it doesn’t sound like a random shooting.”

His two children and mother also live in the east Mecklenburg County home. Police are looking for the people responsible for the shooting.

The FBI are investigating last month’s fatal shooting of three Muslim students less than four hour east from Charlotte – in Chapel Hill, North Carolina. The victims’ families believe that the gunman targeted the students because of their religion, though police have focused the investigation on a parking dispute.