August 25th, 2019 marked the two-year anniversary since the mass exodus of 750,000 Rohingya Muslims who fled violent persecution from Myanmar into Bangladesh. The systematic campaign involved mass rape, murder, and burning down people’s homes.

In a report released on Thursday, the U.N. Independent International Fact-Finding Mission on Myanmar stated the use of widespread and severe sexual violence inflicted upon Rohingya Muslims by Myanmar’s troops demonstrated genocidal intent.

Horror and Healing: Inside the Rohingya Refugee Camps of Bangladesh

The UN report is based on interviews with survivors and witnesses of the brutal military-led violent crackdown in Rakhine, Kachin and Shan states. Women and young girls were heavily targeted by the Tatmadaw, who raped and imprisoned them as sexual slaves on military bases.

The report details that genocidal intent against the Rohingya population was through the systematic selection of women and girls of reproductive ages for rape, attacks on pregnant women and babies, mutilation to their reproductive organs, physical branding of their bodies by bite marks on their breasts and thighs, and so “severely injuring victims that they may be unable to have sexual intercourse with their husbands or to conceive and leaving them concerned that they would no longer be able to have children.”

Myanmar has denied overwhelming evidence of the horrific events and has refused UN investigators to enter the country. Despite this, the UN has called for senior military officials to be prosecuted for genocide, war crimes, and crimes against humanity.

It is our firm belief that there will be no meaningful return of the Rohingya population, no sustainable and secure development in any of the ethnic regions of Myanmar and no long-term peace unless there is an accountability and transformation of the Burmese military. We urge governments and companies to stop their economic activities with the Myanmar conglomerates and companies. We are not against doing business in Myanmar, only against doing business with the military given the terrible human rights abuses.”

According to a report by the Ontario International Development Agency (OIDA) report, “Forced Migration of Rohingya: The Untold Experience”, more than 34,000 Rohingya were thrown into fires, 114,000 others were beaten, 18,000 Rohingya women and girls were raped, 115,000 Rohingya homes were burned down, and 113,000 others vandalized during the relentless violent attack on August 25th 2017.

Bangladesh is now hosting over 1.1 million Rohingyas in the Cox Bazar refugee camps. Myanmar and Bangladesh had signed a pact in November 2017 to repatriate Rohingyas, but a New York Times investigation shows that only a few dozen have. And a recent attempt to repatriate more than 3,000 Rohingya refugees from Bangladesh back to Myanmar failed as people rightfully feared for their physical safety and wanted guarantees of citizenship. Rohingya leader Nosima stated:

The Myanmar government raped us and killed us so we need security. Without security we will never go back.”

The Buddhist nation of Myanmar has consistently refused Rohingya’s citizenship rendering them stateless, and refuses to recognise Rohingya Muslims as part of one of their 135 official ethnic groups.

In the wake of the UN report, innocent Rohingya refugees continue to live with the aftermath of psychological trauma and disabilities. They are unable to leave the camps without permission, and have no rights to work and access to education is limited.

The Fact-Finding Mission will present its final report to the UN Human Rights Council in September 2019. 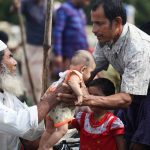