One Parisian’s thoughts on the Paris Attacks

On Friday evening as I was about to have dinner with my little sister at her student accommodation in Paris, she suddenly stopped; staring at her phone, she said in disbelief: “There is a shooting happening in Paris.”

At first we thought it was something like a fight in one of the pubs, though gunshots are exceptional in a country where very few own guns. It just seemed unrealistic.

My hope for my country and my fellow French citizens is that we don’t give in to more violence, since it is exactly what the terrorist are expecting.

I quickly logged on the internet to find out more, and then the nightmare began. We kept receiving more and more information confirming that it was not a fight, it was separate attacks in several districts of Paris. I was still trying to organize my thoughts, and replying to calls and texts from family and relatives, when I felt the urge to join the hospital to help out. I was not on call that night, but just sitting around in the room listening to the news reports and seeing the death toll rising by the minute. It was driving me crazy. I gave a quick call to the hospital, they had launched the “Plan Blanc” (White Plan) specifically designed for massive attacks and had enough staff for now. Then the sound of the helicopters started, adding to the fear and uncertainty that we felt. They wouldn’t stop flying back and forth until very late that night.

As a medical student, as a French woman, and above all as ultimately a human being, I am deeply saddened by what has just happened to my city and my country. Innocent lives taken away, families destroyed. 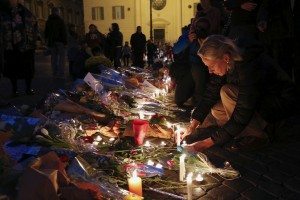 The sadness was still there this morning and as I was reading the news my heart sank at the 120+ dead and 280+ injuried in these heinous attacks. This has been one of the biggest attacks since the Madrid bombings in 2004. The first question that arises is “Why?”. In fact I doubt even the attackers would have a reason to give except their deep-rooted hatred of the Other. ISIS quickly claimed they were behind the attacks and threatened to commit even more attacks, justifying their deadly actions with the Muslim faith. When I read their statement I see everything but the Islamic teachings, I see hatred, violence, and destitution, exactly the contrary of my faith.

In the aftermath of these attacks, I have a feeling we – as a nation- have two choices and they are mutually exclusive. Either we give way to our fears and respond to the violence with more violence, as the partisans of the ‘global war’ are trying to push us into, or we decide that hatred and violence can be only defeated by something bigger, and greater.

We will need a lot of patience to rebuilt what the terrorists destroyed within minutes.

My hope for my country and my fellow French citizens is that we don’t give in to more violence, since it is exactly what the terrorist are expecting. This has been theorised and clearly stated: they want to push more and more so-called “Muslims” to join them. To achieve this goal, they need these Muslims to feel unsafe and unwanted in their countries. They want Muslims to feel marginalised and unwelcome. The unity among us is the best answer we can give them: dividing us is their strategy, as they create a situation in which Islamophobia can prosper and they will then use it to claim they were right attacking the Western countries as they are hostile to Muslims. 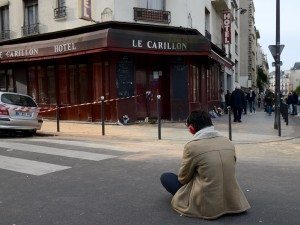 In fact, the politicians and Islamophobes who are conflating all the Muslims with the terrorists are doing exactly what these terrorists are hoping for. It has always disturbed me that they both have the exact same literal understanding of the Islamic sources. Ultimately they appear to be both part of the problem and not of the solution.

I was very deeply touched by the several supportive messages I received and saw on the social media; calls not to conflate the Muslim faith with the terrorists and their attacks. This makes me think that we can definitely defeat them and that we are actually making the second choice. For example, yesterday in Lille (North of France) people gathered in solidarity with the victims of the ‪Paris Attack. The rally was organised by the Human Rights Ligue. They were soon joined by a small group from a far-right movement holding a banner stating “Throw out the Islamists” and chanting racist and Islamophobic slogans. The mob spontaneously reacted by expelling them with loud and clear slogan “Fascists out!”. In less than 5 minutes the racist group had no choice but to leave. The exact same situation and same reaction from the mob in Metz (north-east of France). This is what happens when we unite: we defeat violence and hatred.

We will need a lot of patience to rebuilt what the terrorists destroyed within minutes. We will need love. Lots of love. And resilience.

As for now, we are all mourning the dead, may they rest in peace, and may God alleviate the pain of their families. My prayers go to them, to the 99 severely injured between life and death in the hospitals.