The Zaria massacre – as documented by one of the martyrs

Bukhari Muhammed Bello Jega is one the victims of the recent massacre that took place in Zaria, Nigeria. He was killed along with his wife and daughter.

We have compiled his informative and inspiring posts about the massacre. They are listed chronologically below. We have slightly amended the below text for grammar and spelling. You can find all his original posts here.

Here is a brief background into the situation in Zaria as the army have besieged the house of Sheikh Ibraheem Zakzaky. Much is still uncertain and we will try to bring you updates as and when we receive them.

“It is carnage here in Zaria… We are grateful we landed peaceful and from the situation here. Soldiers are killing civilians in Gyellesu area and home-town of reveared leader Sheikh Ibraheeem Zakzaky. They destroyed all the shops along the road to the house and several bodies of civilians are just pilling up here. Do we have human being in government authority? Are the Nigerian soldiers above the law and the President? Or do those in authority lack the powers to order these killer vampires to stop killing people?”

“I was thinking and asking in this moment of madness if the command centre has shifted from Borno to Gyellesu? Or is Gyelllesu the new Sambisa forest? Yeye very lazy and unproductive set of characters. Shooting civilians especially if they are followers of Shaikh Ibraheem Zakzaky is where you show your trademark. At least you only have weapon to kill but we have faith in Allah and you cannot break our will. Yeye.”

Brothers and sisters are seriously offering prayers not because we are afraid of death. We are praying to Allah to give us courage, bravery, faith and patience not to change no matter the hardship and tension.

“Kano is up with demonstration, Sokoto is about taking up, Gombe is already up. All major cities in Northern states  have demonstration and are in top gear. We are nor terrorists and we condemned terrorism with our words and actions. Why should we be hunted like some common criminals? Or they forgot where their Sambisa is? Or the command centre has now officially relocated to Zaria and in the official resident of Sheikh Ibraheem Zakzaky?

Every corner of this country, all lovers of freedom and followers of Shaikh Zakzaky are urged to organize protests against the carnage happening here in Zaria by the evil machinery of Nigeria army. Now we are going to see if you are going to kill us all in this country. Let us see if we are not considered citizens and without rights to life.”

“So this cache of weapons is equally part of weapons seize from Shiites who decided to assassinate the Chief of Army Staff abi? You came fully prepared to kill the leader of Islamic Movement in Nigeria and his followers and you are busy spreading liars and deception …. Allah indeed has brought all this stress to an end indeed.

Allah’s anger and judgment is coming very soon. Just asked Jonathan, Namadi Sambo and all those who participated in the killing of 34 on July 25 2014. Already the houseboy of the gangster is cooling in EFCC cell! while Namadi Sambo’s leg is about to be amputated. Indeed we don’t have weapons to fight but we have prayers and support from Allah and it ute ultimate weapon indeed” 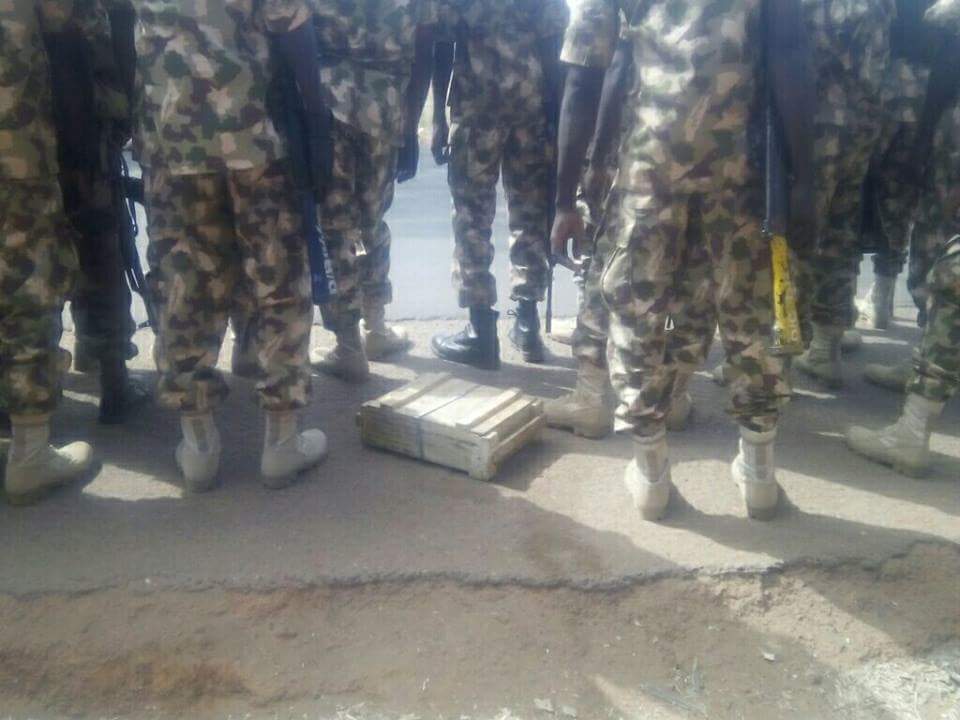 “2 loud explosions around Hussainiya Baiyyatullahi (religious centre) now. Indeed Nigeria Soldiers are doing everything possible to see they end what they started this afternoon, before the morning comes. More re-enforcement of soldiers from Kano just arrived. Siege on Hussainiya Baiyyatullahi. It is an interesting night here. We give give glad tidings to Allah, that we are is still strong. As we pray, rejoice and congratulate each other over the callousness, stupidity and hopelessness exhibited by Nigerian army. If you like, get more re-enforcement across the world, you can never break our will. We are patient with these trials and tribulations. It shall come to pass too and we shall emerge victorious InshAllah”

They have done all the killing and injuring score of brothers and sisters, yet, we remain peaceful. They expected confrontation, the only thing they are getting is the loud slogan of “Allahu Akbar…”

“It is a reality that the military has sworn they will finish this by 6 am. Brothers and sisters are seriously offering prayers not because we are afraid of death. We are praying to Allah to give us courage, bravery, faith and patience not to change no matter the hardship and tension.

We are indeed patient and prayerful for the gift of martyrdom just like our brothers and sisters who just departed this night from the bullets and explosives of the people who are paid to protect the people. If the Nigerian soldiers decided to turn their weapons on innocent and harmless civilians we say this is most unfortunate and call for concern for all lovers of freedom  We are Muslims and we have every right to practice our religion according to the teaching and understanding of Islam. If some say other wise them please come and kill us all. On this kam no negotiation and no going back… we can never surrender like slave and be humiliated like cowards. Just like Imam Hussain said we equally re-echo his beautiful statement; Death at the hands of oppression is nothing but happiness and life living under tyranny is nothing but humiliation”

“Disappointment and confusion in the camp of Nigerian soldiers as they’re about to face the biggest shame of their lives. They have done all the killing and injuring score of brothers and sisters, yet, we remain peaceful. They expected confrontation, the only thing they are getting is the loud slogan of “Allahu Akbar, Allahu Akbar, Allahu Akbar, Ya Mahdi, Ya Mahdi, Ya Mahdi” is what is echoing here from brothers and sisters and children. What a disappointing outing for the Zionists zombies. As shame and defeat is eminent…with all the re-enforcement and weapons and shooting Power, the Will and resolve of brothers and sisters is just getting started. You cannot structure us according to your fancy. We are Muslim.. Lovers of Muhammad and the Family of Muhammad. We have a code of ethics and engagement… No provocation can force us to do your bidding … If you had bothered to read about Islam … it is a defensive religion not offensive ….. and there are a lot of steps and procedurse of engagement in Jihad please…. You cannot structure us according to your ignorance and deception ‪#‎siegeonhussainiyyabaiyyatullah”

Shame and defeat is imminent, as morning gets closer by the day. The people will continue from where we stop… they lost the support and sympathy of the people …. The REAL BOKO HARAM is now on the loose bombing building and killing innocent civilians ….. Indeed the command centre has just moved to Zaria”

Over the years the Nigerian government has done everything within its power to structure the Islamic Movement in Nigeria into having executive structure so that they can penetrate and destroy the movement, that failed because the only leader is Mallam Ibraheeem Zakzaky (H).“Structuring the unstructured movement….

Whatever the situation please do forgive us, we are not perfect but just trying to see what we can contribute so that we can have excuses before Allah

The biggest threat to Zionism and tyranny is having a strong and pious Islamic leader with central command system in Islamic Movement. They did everything the Movement structure the unstructure movement but its remains unstructured because everything is with Mallam Ibraheem Zakzaky. He remain the spiritual and political leader of the Movement and so far it has frustrated all their plans because Allah Has honoured him after much trials and tribulations with the gift of wisdom and destroying all the plans of the enemies of Humanity.

Just like they were able to achieve restructuring movement in Sudan lead by Hassan Al-Turabi, Egypt of Muslim Brotherhoood and Islamic Front in Algeria, which lead to infiltrations by the agents leading to its destruction…. they still tried their best to sell that dummy to people of Islamic Republic of Iran, but, it failed because the supreme leader Sayyeed Ali Khameini remains the leader of the revolution.

Unfortunately, since they are unable to structure the movement into having leaders and positions such as the Secretary General, Financial Officers, Treasurer, PRO etc, their plan cannot achieve the desired result …. so they have lost senses, reasoning, control and a sense of direction…. Unfortunately your cowardice and lack of control has now become your Waterloo and people can see through your conspiracy, deception and subservience…

No doubt the Islamic Movement is the only truly Islamic Movement in Africa and with the gains and the general acceptance of the larger populations they are getting they are afraid everyday of losing their relevance and power… But, is it about power? It is not about power because even a lot of Imams of Islam never become leaders but, concentrated in reviving and making sure the true Islam is alive…. Ours is reviving the souls and lives of people to return to Allah and Islam alone …. What come after worth is from Allah…. Indeed you shall continue to fail and shame and shame shall continue to be your destination…. Insha Allah”

13th December at 4:24am – final update before his death

“Unfortunately battery is running out and may be this is my last post …. and is already morning as the call for prayers is already taking shape insha Allah … Whatever the situation please do forgive us, we are not perfect but just trying to see what we can contribute so that we can have excuses before Allah when he asks us about the state of affair about Islam… We can say:

Please recite a Sura Fateha for brother Bukhari Muhammed Bello Jega, his family and all the innocent souls that have lost their lives in Zaria over the last few days and continue to pray for the safety of Sheikh Zakzaky and his followers.