“We don’t want another tragedy. People are afraid.”

“We don’t want another tragedy. People are afraid.”

A recent news report [December 12th, 2017] from French Canadian channel TVA Nouvelles caused serious turmoil for a small Muslim community in the city of Montreal. The news report claimed that the Ahlillbait Mosque in the Côte-de-Neiges neighbourhood had asked for construction companies to remove all female workers from the vicinity of the mosque, claims which were unfounded and have yet to be proven. The reporter in question, Marie-Pier Cloutier, had heard such a rumour through quote-unquote “reliable source” with “irrefutable evidence” and, without running any research or even searching for the supposed female construction worker in question, ran a news report on a national TV station viewed by thousands in the province.

The mosque was quick to issue a press release to deny all these claims, but it was ignored by many and believed to be a ploy to get people to ignore the news, itself coming from a major media outlet in the country.

The news left a social media storm in its wake

Needless to say, the response to this from the general public was outrage, especially for those who were quick to believe the story. As such, the mosque received many hateful comments on their social media profiles, as well as threats posted to them personally. It is evident that people did not take the time to review these allegations and instead, chose to draw conclusions based on their own views on Islam and Muslims. 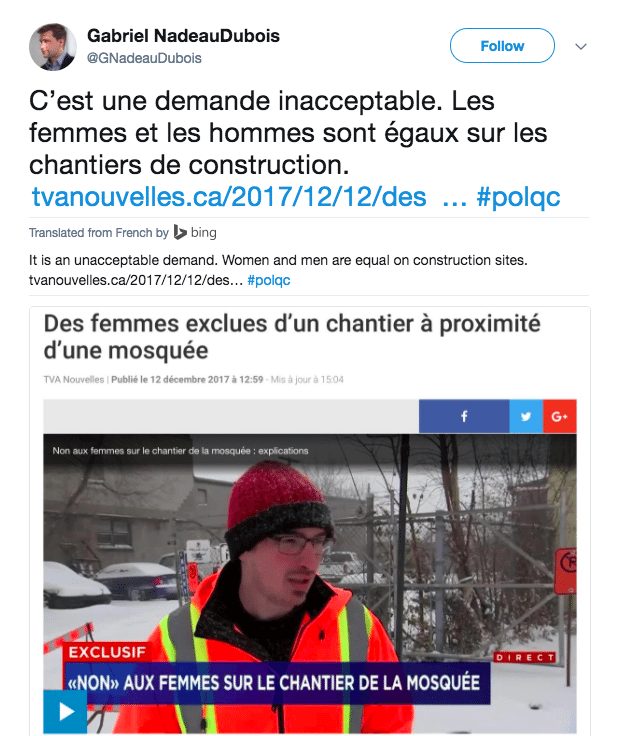 Zahra Al-Mawlawi, who has been attending the Ahlillbait Mosque for more than three years, said she was disheartened and shocked when she read the claims. Her main concern in the wake of this news was for the safety of those who attended the mosque. “There are many different generations that attend that mosque”, she said, “from the elderly all the way to infants. And with that story out there, what if there are people who do want to do some kind of harm or graffiti? They are going to come in the area.”

Shahad Salman, a lawyer who has attended the Ahlillbait Mosque for several years, said the claims reported by TVA Nouvelles on Tuesday and the backlash are “beyond harmful; we’re demonized… The damage is done, especially outside of Montreal.”

To add fuel to the fire, many Quebec politicians were quick to react to the news, deeming it to be ‘completely unacceptable’ and a violation of the Charter of Rights and Freedoms of Quebec. Conveniently, a majority of these have been removed from Twitter since the initial news report and the entire story being debunked.

A little too late?

No evidence was found to suggest that the allegations were true, as found by Quebec’s construction board. Quebec’s labour minister, Dominique Vien, said that “According to the findings [of the construction board], there was no demand made by the mosque. It’s very clear the mosque never made this kind of request. They haven’t made a request like, ‘We don’t want to see a woman.'”

TVA Nouvelles was forced to apologise and to retract the story, suggesting that their sources had changed their version of events after the initial interview. However, it has not apologised to the mosque or its attendees, who were threatened and made to feel like they could no longer feel safe in their place of worship. Protesters showed up outside the mosque for Friday prayers to protest against the supposed sexism of the mosque and to display anti-Islamic sentiment. Though authorities were present to ensure that the day went without incident, it is saddening to see that this measure needed to be taken.

The dangers of irresponsible reporting and fake news

While every media outlet wishes to be the first to obtain some kind of news scoop, it is problematic to think that such a major news outlet would be this irresponsible when it comes to reporting. It comes at a time where xenophobia is at its peak and the statements from far-right groups such as La Meute only go to show that irresponsible reporting can cause serious harm to those to whom it is perpetrated against. It is almost too easy for such news to fuel people’s prejudice and ignorance. One of the protesters outside the mosque on Friday refused to believe that the story is untrue and that ‘the Muslims must have forced them to change the story.’

Many were quick to the draw when it came to this story and did not take the time to rethink things or wait for more information before making judgement. The problem here not only falls on the shoulders of media outlets but also on politicians who also took the bait. Politicians eager to appease their constituents are equally to blame. Religious intolerance, and accommodation for it, are one of the most contentious issues here in Quebec, as can be seen with the recent ban on the niqab in the province. Such news reports do nothing but fuel them.

One year on from the Quebec mosque shooting

It is almost a year on from the Quebec City mosque shooting, where six men were killed and such an event is still fresh in the minds of Canadians. With the flood of support and the united stand from all Quebecers and Canadians alike, it’s almost as if it all melted away with last year’s snowfall. William Kobartly, a lawyer for the Ahlillbayt Mosque said:

“We don’t want another tragedy. We’re getting close to January 29th, people are afraid.”

The mosque is yet to decide if they are to persue legal action against TVA Nouvelles for this news report.