Week of terror: when will this madness stop?

As you all know, last Friday in Paris, six places were attacked simultaneously by ISIS terrorists. Shootings, bomb blasts and a hostage siege left at least 150 people dead and some 180 wounded, with 80 in critical condition.

Earlier on during Friday afternoon, attacks in Baghdad including a suicide bombing at a funeral in a mosque, also killed at least 19 people and wounded 33. 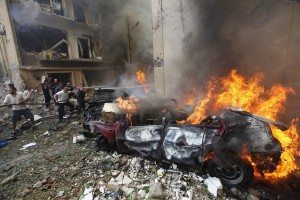 Just 24 hours prior to this on Thursday, ISIS committed a double suicide bomb attack in Beirut, Lebanon, resulting near 50 deaths and wounding 250 in what has been the biggest terror attack in Lebanon since 2013.

Furthermore, on Wednesday, seven Hazaras including a 9-year old girl were beheaded by ISIS in Afghanistan, causing thousands to protest in the streets of Kabul.

Truly and shockingly, this has been a week of terror against humanity in all parts of the world. But what are we to do, and how will we battle the cancer that is ISIS?

First and foremost, we must stop pointing fingers at one another. Accusing any one community and holding them responsible for these disasters is both illogical and unjust.

Remember: if we are divided, we are conquered.

The second thing to do is to quit having double standards, and this applies to everyone. All lives are important, and as Paul Farmer says, ‘the idea that some lives matter less is the root of all that is wrong with the world.’

When any innocent person becomes a victim of terror regardless of faith, gender, nationality and race, we should stand with them. Just because they are from a country you don’t like, or a religion you don’t care about, does that mean their lives matter less? In every group of people there are extremists, and that is a law of the Universe nobody can argue with.

Some may argue that ISIS essentially claim to be a Muslim group, but they probably don’t know that in the past two years ISIS have slaughtered over 100,000 Muslims alone, making Muslims more deserving of the name ‘victim’ than most other groups. But with that being said, terrorism is terrorism in all its forms, and all those who suffer from acts of it are victims.

Thirdly, we should all collectively vow to do everything we can to work against terror. Use your talents and abilities to counteract terrorism. If you have a strong social media presence and many followers, encourage speaking out and protesting against these acts of violence. If you are good at writing, write in support of the oppressed. If you prefer public speaking, use your voice to oppose ISIS and other terror groups. Everyone can do something.

Last, but by no means least, we must press our governments to take action. And by action, I don’t mean spying on a group of students through some ‘counter-terrorism bill’ that has proved useless, nor do I mean military intervention in Syria or Iraq to ‘bomb’ ISIS. In a time where everything is on the Internet, it’s not hard to do a bit of research and find out which government supports who, and what each foreign policy is like.

By taking action, I mean to withdraw any alliances they have with terrorist-funding countries. To use their intelligence to stop terrorists in their tracks before they take over the world. To stop hate-mongering through mainstream media that tell us whose death to mourn and whose to ignore. To create media that instead promote unity against evil.

Remember: if we are divided, we are conquered. If we don’t manage to successfully take any of the steps mentioned above, terrorism will easily infest every corner of the Earth, and that will be the end. Then we would only have two choices: to either comply, or be killed.

Let’s not let it get that far. Please.

Kawther Ayed Al-Zubaidy
A young journalist and humanitarian that seeks to provide answers for common questions.

Opinion: Use the Name ‘Daesh’, Not ‘ISIS-K’ When Speaking About Afghanistan

Human Rights and British Citizenship: The Case of Shamima Begum