When students lead the way: A snapshot of what’s brewing and burning in India’s capital

Videos have surfaced showing the police excesses, including the use of batons on unarmed students, tear gases being thrown in the library, and students being dragged outside and beaten mercilessly.

Videos have surfaced showing the police excesses, including the use of batons on unarmed students, tear gases being thrown in the library, and students being dragged outside and beaten mercilessly.

On the 15th of December, a protest rally was organized in Jamia Millia Islamia, a premier New Delhi-based public university. Much like many other parts of the country, protests had been ongoing in the campus over the recently passed citizenship amendment bill, which introduced the idea of religion-based citizenship. Put simply, non-Muslims from neighbouring countries could now acquire citizenship on the basis of religion, however Muslims are not eligible. This was unprecedented, for hitherto the constitution did not taken religion to be a deciding factor for citizenship.

Immediately after the passage of the act, spontaneous protests broke out throughout the country. A peaceful protest rally was organized from Jamia Millia Islamia, led by students. However, police not only stopped the rally, but also went on a rampage around the campus. Videos surfaced showing the police excesses, including the use of batons on unarmed students, tear gases being thrown in the library, and students being dragged outside and beaten mercilessly.

An uproar arose after these incidents came to light. Opposition parties demanded a probe. Students held rallies across India in support of Jamia. Student fraternities across the world, including Harvard, Yale and Oxford, wrote signed letters expressing solidarity with the students. Instead of suppressing the voices of the protest, the brutal police actions only ended up bringing greater attention to it.

Two images from the incident went viral. The first was of the female students who stopped the police from hitting their male friend. The second was of a group of students who climbed atop a wall and raised posters of Gandhi and Ambedkar, two of the founding figures of the Indian national movement. In the numerous protests held across the country, people read out loud the Preamble to the Constitution of India.

Jamia Millia Islamia is a university that was born in the heat and rush of the Indian independence struggle. It emerged in the backdrop of the Khilafat movement in India, which mobilized support for the Ottoman Caliphate. Prominent members from the movement were associated with the founding of the university. 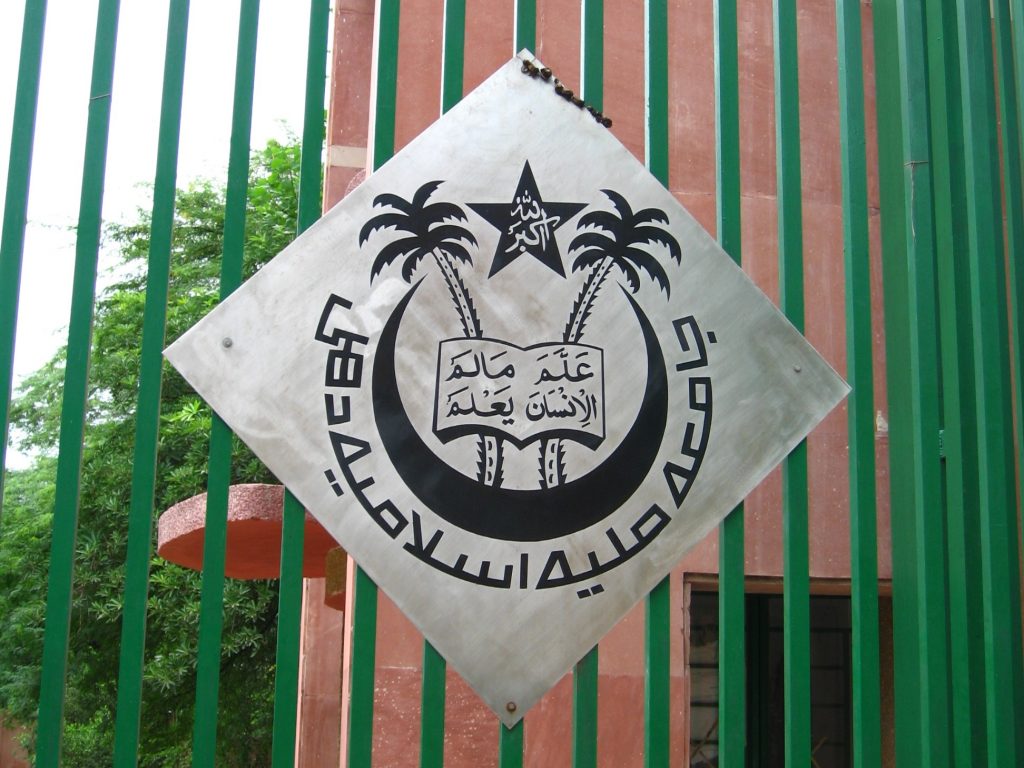 One of the early figures associated with the university was Dr. Zakir Hussain, who later became the third President of India. Regarding the Jamia emblem, he wrote:

“Right on the top is a star with the inscription’Allah O Akbar’. When in dark nights poor travellers have to traverse jungles and there is no one to show them the way, they chart their course with the help of stars. The star of Allah O Akbar is the guiding star of Jamia. Its eyes are fixed on this star which shows it the path in the darkling world. It reflects the truth that Allah is the greatest and he who bows his head before Him only, discovers the truth. Having bowed before Him, how can the head bow before anything else? Beneath this glittering star is a book with the  inscription, Allammal Insaana Maalam Yalam (Taught man that which he knew not). This is the Holy Quran. Through the Holy Quran, Allah has revealed His Will to His differences of caste, class, colour; of master and slave, and became true to His tenets. This book led from darkness to light, and placed the wayward and lost on the Straight Path. The Prophet made an example of his own life. By the light of his eyes and the warmth of his heart, He prepared a group of good persons who cleaned the world of evil and spread the Word of God. On either side of the Book are two date tress typical of the land where God’s last Prophet was born. They are symbolic of the barren valley in which nothing grew; but it was there that the sapling of din took root. These trees are emblems of hope from a land in which not a leaf or flower could sprout; but wherein suddenly the springs of hidaya burst forth and drenched the ‘communities of the heart’. They are a source of consolation for people who became disheartened with adverse circumstances. Why do external factors make them lose hope?”

The two women who emerged as the face of the protest movement were being interviewed by a reporter. The reporter asked them, did they not feel any fear? To which, they replied:

“We don’t have any fear over this government, police or anyone. We do sujood in front of only Allah. We fear only Him.”

Saad Razi Shaikh
Saad Razi Shaikh is a freelance journalist oscillating between Delhi and Mumbai. He writes on popular culture and community initiatives.