Every now and then a film quote so powerful is composed, it becomes almost proverbial.

Master Oogway in Kung Fu Panda imparted, “Yesterday is history, tomorrow is a mystery, and today is a gift. That’s why it’s called the present.”

In the 2016 Jungle Book, when Baloo asks Mowgli if he knows any songs, he replies by singing “For the strength of the Pack is the Wolf, and the strength of the Wolf is the Pack.”  Baloo instructively responds, “That’s not a song, kid. That’s propaganda.”

When Colin Kaepernick protested over oppression against minorities by choosing to sit during the American national anthem at Saturday’s NFL game, I wonder if he, at least in part, viewed it as a protest against propaganda, just as I wonder how many in the Jungle Book audience understood the depth of Baloo’s wisdom. 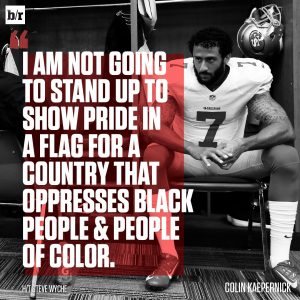 The root of his protest however, raises an important question. When your nation is involved in overt and systemic forms of oppression, how can one stand idly by praising its national symbolism, an act often encouraged as tacit loyalty to the state?

Few countries do nationalism like the United States of America. Pledges before school starts; anthems before every game of every sport; fist pumps to the chant of U-S-A. Even Left Wing politicians have to act like Right Wing zealots lest they be accused of defecting to North Korea. Just take the recent Democratic National Convention where the stage, criminally, wasn’t docked out with Red, White and Blue flags, a scandal that managed to headline at FOX ‘News’ for three days.

Kaepernick was protesting what he see’s as systemic oppression of the African American community, a topic that should be defining the upcoming election. Whether or not minority communities will vote for Hillary Clinton just to keep Donald Trump out of office, or because they genuinely believe her policies will positively impact their circumstances is yet to be seen – and I’d argue it’s largely the former. In either case, Kaepernick stated, “I am not going to stand up to show pride in a flag for a country that oppresses black people and people of colour.”

The backlash against Kaepernick was highly predictable. Social media lit up with suggestions of treason and that he should leave the country. Of course, many also praised his bravery suggesting his actions were heroic, akin to that of the late boxer, Mohammed Ali.

I must admit, I don’t think in my adult life I’ve ever stood for the English national anthem, or for any for that matter. My “radical Leftist” views force me to see nationalism as a vile, immature and prohibitive thing.

Many Muslims argue that nationalism is forbidden (‘Haraam’) in Islam, claiming that only promotion of the Ummah is permissible. This too is nonsensical. My argument is that nationalism is not conducive to the needs of human growth. What rational person would draw an arbitrary line in the sand, segregating people from one another, and then champion it as superior and more valid than what lies on the other side?!

When humanity does so in any other case it is considered prejudicial and ignorant. If you drew lines and segregated white and black, Christian and Muslim, male and female, or young and old, it would be unacceptable. But dividing human beings between language or culture or history is positive? Why segregation of human beings and division of God-given natural resources for ALL humanity is a beneficial thing is beyond me.

Moreover, as history has shown us, the transient nature of these states and therefore how daft loyalty to them is: One minute, literally, you’re from East or West Germany, and the next you’re from Germany. How can human beings learn to cooperate and flourish if they essentially see each other through the lenses of rivalry, reductionism, historical feud and stigma?! Didn’t Islam come to rid the Arab people of tribalism; isn’t nationalism just an aggrandised, modern version of tribalism? 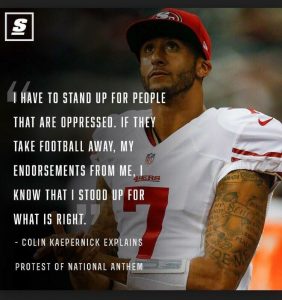 But I digress. Kaepernick saw oppression in his country and decided to protest in a way that would bring attention to his cause and prolong the spotlight on racial inequality. The question I raise to Kaepernick and his supporters is simple: Do you want non-African American’s to join you in your struggle for justice for minorities?

I imagine the answer is a resounding ‘yes’.

Just as the ‘Black Lives Matter’ campaign is supported by people of all colours, it shouldn’t have taken the killing of unarmed black men for Kaepernick to remain seated during the anthem. Did he not see systemic oppression elsewhere?

US (and amongst others, British) foreign policy has been the cause of the death of at least a million Iraqi’s. Its media, financial and military support for anyone willing to fight President Bashar al-Assad gave rise to Al-Qaeda, Jabhat al-Nusra and ISIS in Syria, slaughtering half a million and displacing HALF of the country. US selling of weapons to Saudi Arabia has precipitated in the world’s greatest humanitarian disaster following two years of war in Yemen. Libya… Israel… I could go on.

To my experience, Muslims in the States, UK and France largely celebrate nationalism and stand for their national anthems. In the States, a perplexing scene saw Muslims fawn over President Barack Obama in his visit to the Islamic Society of Baltimore in February. A person who has supplied weapons to “moderate terrorists” and authoritarian states, increased surveillance on Muslims and drone struck killing hundreds, maybe thousands of civilians. But yet it was an African American who remained seated at the killing of African Americans, while Muslims, literally, cried joyfully at President Obama’s visit, reaching out to touch him, as if he were the Ka’ba itself.

Protesting with banners down a street and civil disobedience has, to a degree lost its impact, for now at least. Protesting the national anthem was ingenious. This was a loud statement saying, ‘so long as innocents are systemically killed in this country with no genuine attempt at resolution, my support for this country is reserved’. Muslims would do well to learn from Kaepernick, and ‘Black Lives Matter’ would do well to unite with the ‘Muslim Lives Matter’ movements for much of their grievances are solved in similar ways.

To many, the idea of a Muslim protesting at the anthem questions their patriotism. A Muslim’s protesting at such symbolism would in no way make them any less patriotic than it did Kaepernick in his demonstration. Moreover, these antiquated notions of loyalty to a nation state before humanity is long overdue a reform.

The reason Kaepernick’s sit down was so powerful was that it brought the vocation and professionalism of sport into the political arena through a non-violent, grassroots protest. It pinched at the propagandists that see their country as incapable of doing wrong and queried the value of a nations’ flag, as no longer Red, White and Blue, but simply dyed red.