Help the Flamengo Juniors build an orphanage in Palestine

Help them break their own record!

Help them break their own record!

Flamengo started a youth team for the community children in 2001, with the intention to support Muslim ethos and football in the community. Due to personal reasons, the team folded in 2007, after several successful years in the Asian Football League. However, in 2015, some of the team management and former players decided to play a charity match and the money went towards a chosen charity, they managed to raise £200. 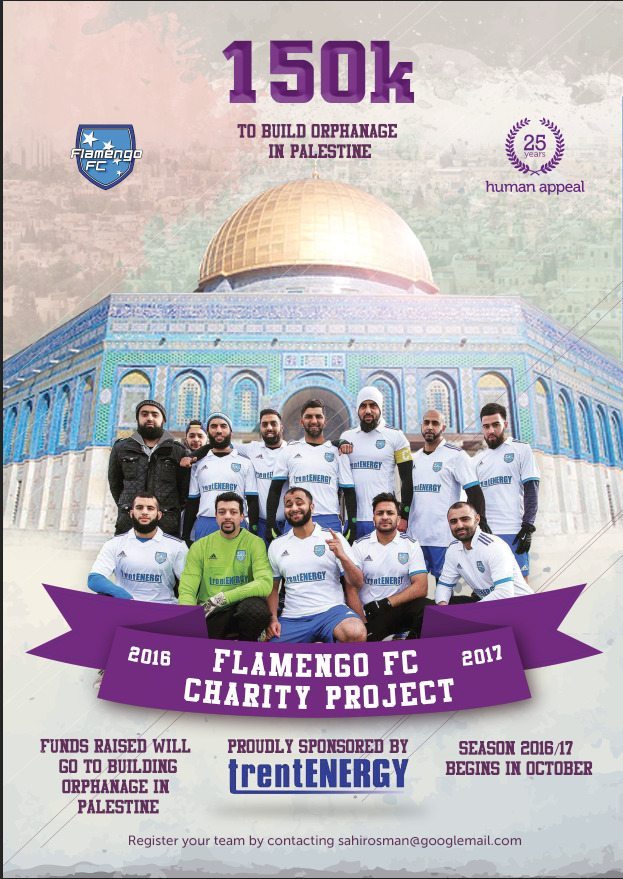 After this match, the group of players wanted to do something different and give back to Islam and make their contribution to the Muslim community & protect their Akhirah, so they thought why can we not play other teams solely for charity and raise money. This spurred us to take on more and more life changing projects.

In 2015-16, we managed to raise £90,000 for the Senegal Orphans School. The project is now under construction and is close to completion.

This year we are hoping to break a new record with bigger games, bigger venues, and bigger donations. Let’s come together as one and be part of this fantastic legacy as we aim to unite local communities through football. Football is a beautiful game that we love around the world, so why not play this beautiful game to raise funds and reach out to those for charity.

Our plan this year is to build the first school for orphan girls in Palestine, near Al-Aqsa. School) near Al Aqsa. The total cost of our project is £150,000. We can only do this with your help.

How can I help?

You can donate by visiting their ‘Everyday Hero’ page: https://give.everydayhero.com/uk/flamengofc-4-palestine. You can also show your support by showing up to their upcoming games and giving them a good cheer!